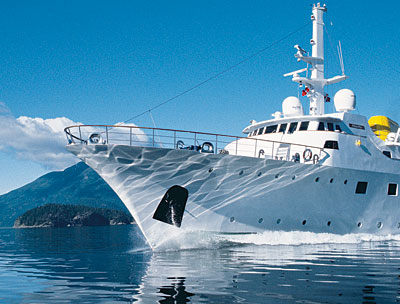 Atop a nameless mountain in western British Columbia, surrounded by a cloud and struggling to keep my balance in knee-deep snow, I inspect my transceiver while our heli-skiing guide demonstrates how to probe for bodies in the event of an avalanche. Just minutes ago, helicopters lifted our group of 10 skiers and three guides from the deck of M/Y Absinthe, and we now have an area 200 times the size of Vail all to ourselves.

Absinthe, the 201-foot megayacht that serves as our homebase, is moored nearby in Toba Inlet, which stretches east into the British Columbia mainland at the upper tip of the Strait of Georgia. Our journey began at the Whistler Blackcomb resort, where my fellow skiers and I spent a day on the slopes before buckling ourselves into three helicopters for a half-hour flight to our yacht in Drew Harbour. Over the next five days, we would anchor in two inlets, Toba and Jarvis; cruise south to Vancouver through the Canadian Inside Passage; and end our trip in Port Angeles, Wash.

Absinthe’s captain, Roy Cooper, pilots his boat to locations from which its onboard helicopter can shuttle guests to outdoor adventures—skiing the peaks of British Columbia in late winter and early spring, hiking Alaskan glaciers in summer, or fishing remote holes in Costa Rica and Panama from September through February, when the yacht cruises Central America’s Pacific coast. Other charter yachts laden with the kayaks, Sea-Doos, mountain bikes, and other toys Absinthe carries might access the same waters, but none of them, according to the captain, offers the freedom of mobility that his vessel does. “They don’t have the helicopter,” says Cooper, a veteran of several charter yachts. “They wouldn’t be in the mountains; they wouldn’t be fly-fishing . . . . I don’t know any commercial boat that’s doing this kind of thing at all.”

The expedition components to an Absinthe trip are only part of its appeal. The yacht’s teak decks, mahogany rails, and colorful, comfortable furnishings contrast with the glass-and-steel sterility of many modern vessels. Spiral staircases and a grand piano contribute to the maritime nostalgia, as does Absinthe’s age: The yacht was built in 1973, although it relaunched in June 2005 after a 24-month refit. The new decor and amenities draw from the yacht’s winter and summer home in the Pacific Northwest. Native American sculptures and paintings adorn the interiors, and executive chef Steve Ridley prepares such local delicacies as tamari-marinated black cod and roast caribou tenderloin.

Absinthe accommodates a maximum of 12 guests in its cabins and staterooms, which can be reconfigured to provide more privacy and space for smaller groups. But even with a large crew (in our case, 25 staff members, most of whom stay aboard a smaller boat that accompanies Absinthe), the yacht never feels crowded, thanks to its lounges, decks, media room, library, and eight-person hot tub.

One afternoon, our crew showcases the spontaneity Absinthe affords by shuttling us—and the food and equipment for a barbecue—in the helicopter to a large snow cave that one of the guides had spotted earlier in the day. We dine on grilled steaks and chicken at the mouth of the cave before heading back to the yacht. The next day, a cloud cover prevents us from traveling to the heli-skiing slopes, so we take a chopper ride to a remote river, where we land bull trout under the direction of fly-fishing guide Peter Norie.

The skies are clear the following morning—at least, that is, until we land on the peak above Toba Inlet. But the cloud surrounding us on the mountaintop does not discourage our heli-skiing guide, Chris Korthals. “Follow my tracks,” he says before carving a series of perfect turns down the steep slope. I gather my nerve and shove off, cutting my own zigzag pattern to the left of his tracks.

Within minutes, the cloud has engulfed the mountaintop, making our scheduled lunch spot inaccessible. Pilot Steve Flynn picks us up, improvises, and touches down on a bank of the Toba River. The guides set out sandwiches and pour Champagne, and we eat our lunch on the beach, wearing ski boots in the sand.