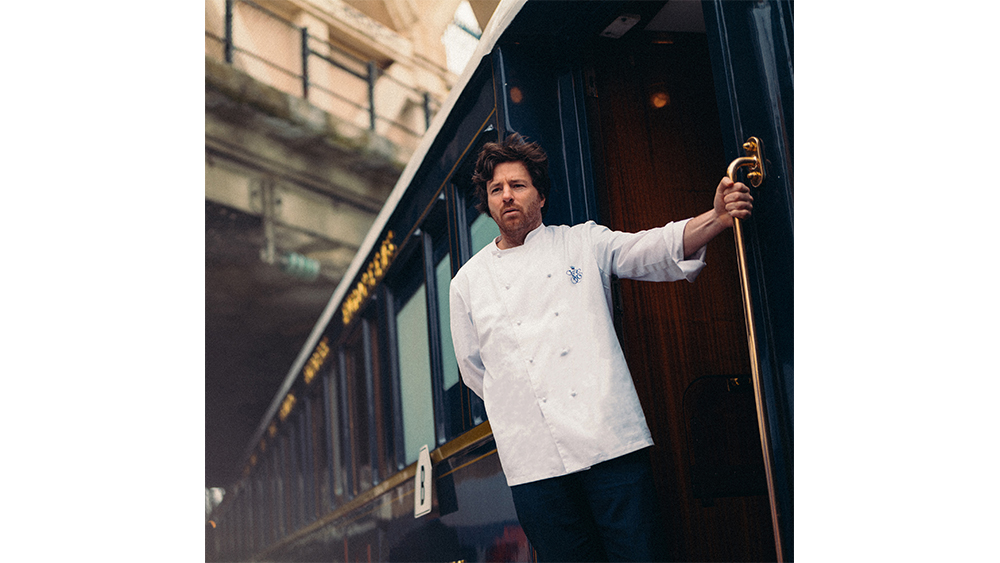 After sipping a 3674 cocktail—a bracing concoction made with gin, Cointreau, lemon juice, sugar and Angostura bitters—in the moody blue bar car for which the drink was named, I take a seat in the mustard-hued L’Oriental, one of three elegant 1920s dining carriages found on the legendary Venice Simplon-Orient-Express (VSOE), a Belmond Train. At the same time, a similar ritual is unfolding in the Lalique glass-adorned Côte d’Azur and the green velvet-swathed Etoile du Nord carriages, because all aboard are preparing to feast on a dinner prepared by the train’s new chef, Jean Imbert.

Imbert, whose prestigious post was announced on April 5, is no stranger to the luxury realm. Last year he was named executive chef at Hôtel Plaza Athénée in Paris, a city where he also oversees the restaurant Monsieur Dior at the recently revamped Dior flagship on Avenue Montaigne. La Case at the Cheval Blanc St-Barth resort also bears Imbert’s imprint.

My overnight journey from Venice to Paris, with Imbert on board, is taking place just before the VSOE kicks off its 2022 season. As the train makes its way northwest, I sit down with Imbert, who tells Robb Report that as soon as he heard LVMH, which acquired Belmond in 2019, was searching for a chef, he wrote a heartfelt letter sharing how happy the prospect of such an opportunity made him. “It was one chance in a million, but I put all my energy into this one chance,” he recalls.

One of three 1920s dining cars aboard the train  Alia Akkam

For Imbert to want to take on a project, it must possess “character, a legacy,” he points out. “It must have a story to tell.” With its rich, glamorous history dating back to 1883, the Orient-Express naturally stoked Imbert’s passion. “The star is the train,” he points out, adding that he only wants his fresh and simple approach to food to bolster an already heady experience.

Inspired by vintage VSOE menus, Imbert’s dishes are all closely linked to quality purveyors who can provide ingredients like morels, peaches and figs to reflect the shifting seasons. At the same time, they must be reliable, as finding consistent partners is one of the logistical hurdles of cooking on a train. “I’m always concerned with the raw products. Where is the chicken coming from? Which nice producer is going to come to the right spot when we arrive at Gare de l’Est (since) they only have 20 minutes to deliver before our departure?”, Imbert elaborates.

The chicken over carrots, glazed with albufera sauce, is one of Imbert’s new dishes.  Alia Akkam

The physical limitations of the kitchen can also be difficult to navigate—not that the average guest would notice. During my memorable meals, for example, the dinner menus included dishes like Beef Wellington, roasted turbot with Hollandaise sauce, avocado and burrata lobster salad and a tiramisu soufflé. Earlier that day, lunch consisted of a velvety chicken breast in albufera sauce, followed by a bright strawberry and vanilla vacherin.

While the chicken had been prepared à la minute in one of the two petite 118-square-foot kitchens, the asparagus paired with Parmesan, capers and blood orange that had preceded it was made prior, in Venice. Breakfast, a just-baked batch of Maison Kayser pastries delivered straight to the cabins, is also a trustier option than depending, say, on an early morning croissant shipment.

Breakfast is enjoyed in the cabins, like this Grand Suite.  Belmond

Each of the train’s kitchens fits three cooks and one chef or sous-chef at a time, and is well-stocked with a salamander, plancha, gas stove, bain-marie and three ovens, as well as a dish warmer and heat lamps at the pass. “Everything has to arrive at the table perfectly—and hot,” Imbert points out. “When there is complexity, you have to challenge yourself creatively.” Certain territory is also off limits in these kitchens. If a guest requests an off-menu item like French fries, it’s impossible because boiling oil and water in large batches is too dangerous if the train happens to stop short.

Imbert is acclimating to the mobile restaurant life with an assist from executive sous chef Igor Maccagnan, who has been with VSOE for 16 years, and general manager Pascal Deyrolle, a Belmond veteran. “VSOE should stay true to its past,” says Deyrolle, “but it shouldn’t be a museum.” The addition of Imbert, who helped update the menus, the dinnerware and the design of the restaurant cars, is one vibrant aspect of the brand’s ongoing evolution.