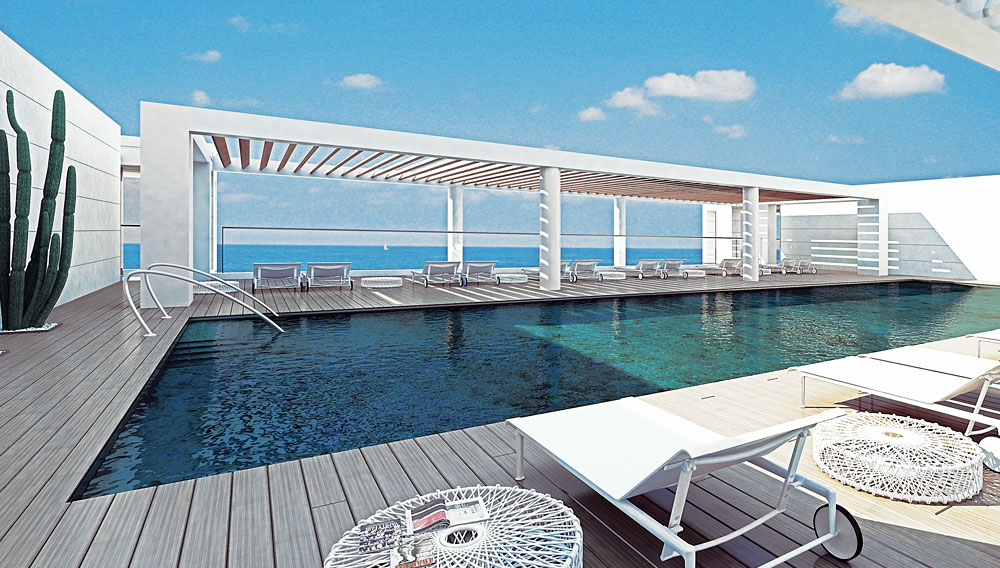 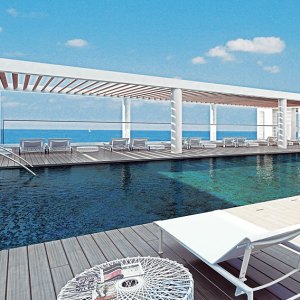 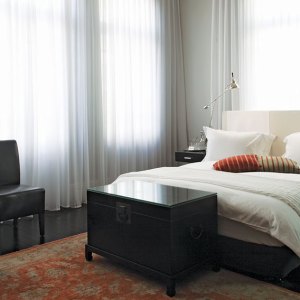 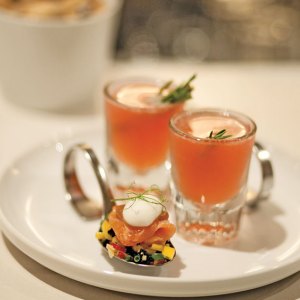 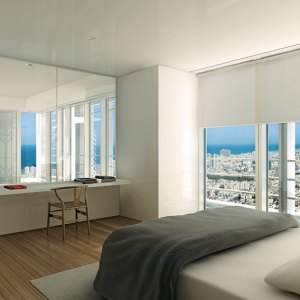 While the State of Israel often seems to be in a mire of conflict, the nation’s second-largest city has evolved into an oasis of creativity for some of today’s most forward-thinking designers. With European-style boulevards, state-of-the-art museums, and powdery beaches that look more like Miami than the Middle East, Tel Aviv is not only cultivating a cadre of homegrown visionaries, but also luring the projects of such luminaries as the American architect Richard Meier. From the sea of Bauhaus buildings in the White City to Rothschild Boulevard’s tony boutiques and restaurants, Israel’s Mediterranean metropolis is captivating the design faithful. [By Jackie Caradonio]

Israel’s first Ritz-Carlton hotel will open later this year in the seaside resort town of Herzliya, just outside of Tel Aviv’s city center. The property will offer 114 guest rooms, as well as 82 whole-ownership residences (priced from $800,000 to $4 million). Designed by the New York–based firm Studio Gaia, the residences will feature a warm color palette and details of wood, stone, and leather. +972.9.957.8049, www.ritzcarlton.com

This 12-room property inhabits a former 1920s mansion on the edge of the city’s Bauhaus district. Featuring clean, minimalist interiors and original works by local artists, the hotel, open since 2008, is also home to one of the city’s most coveted reservations: a French-Vietnamese brasserie created by the local restaurateur Mati Broudo. $300 to $450; +972.3.564.6100, www.hotelmontefiore.co.il

The Richard Meier–designed residential tower on upscale Rothschild Boulevard will likely become Tel Aviv’s most exclusive address once it is finished next year. Bathrooms with Carrara marble, kitchens with Poggenpohl and Boffi appointments, and windows stretching floor to ceiling will mark the interiors. Three 360-degree-view penthouses with private terraces will include one-of-a-kind collages created by Meier himself. $1 million to $50 million; +972.3.510.0827, www.meier.co.il

An eight-year restoration that concluded in March 2012 has made this boutique hotel one of Israel’s finest luxury escapes. Located in the Mediterranean village of Acre some 70 miles outside of Tel Aviv’s city center, the historic property—composed of two palaces—abounds with captivating amenities and features, including a 900-year-old wine cellar turned restaurant, a 400-year-old Turkish hammam, and, on the ceilings, trompe l’oeil paintings. From $320; +972.74.729.9799, www.efendi-hotel.com

A bold, masculine aesthetic and unexpected details are the hallmarks of Tel Aviv native Arik Ben Simhon’s furnishings and accessories. Standouts include a white lacquered chest with knobby bamboo drawer pulls, and a collection of oversize armchairs upholstered in puffy tufted leather that appears inflated and buoyant. +972.3.683.7865, www.arikbensimhon.com

The sculptural aspect of Adin & Royale’s jewelry owes to simple geometric forms and traditional handcraftsmanship. Striking yet delicate bracelets (pure 18-karat gold by special order), such as this Egyptian-style cuff with graphic cutouts that allow the wearer’s skin to show through, are effortlessly modern. +972.54.353.8480, www.adinroyale.com

Designated a UNESCO World Heritage site in 2003, the White City zone comprises more than 4,000 historic Bauhaus and International Style structures. Today, the area’s cubic, whitewashed buildings are home to some of Tel Aviv’s most stylish restaurants, galleries, and hotels.

One of Tel Aviv’s longest-standing art spaces, Gordon was among the country’s first galleries to represent Israel’s avant-garde painters of the 1960s, such as Joseph Zaritsky and Larry Abramson. Today, a second colocated space, added in March 2012, focuses on the nation’s next generation of artists. +972.3.524.0323, www.gordongallery.co.il

Colorful baroque furnishings mingle with sleek contemporary pieces at this townhouse turned hotel, which features 15 individually designed rooms by the Israeli studio Shaltiel-Kastiel. The vibrant style continues in the property’s restaurants, where chef Yonatan Roshfeld serves up a variety of offerings, from Catalonian small plates at Tapas 1 Ha’am to locally sourced fine cuisine at Herbert Samuel. From $380; +972.3.630.8777, www.almahotel.co.il [J.C.]