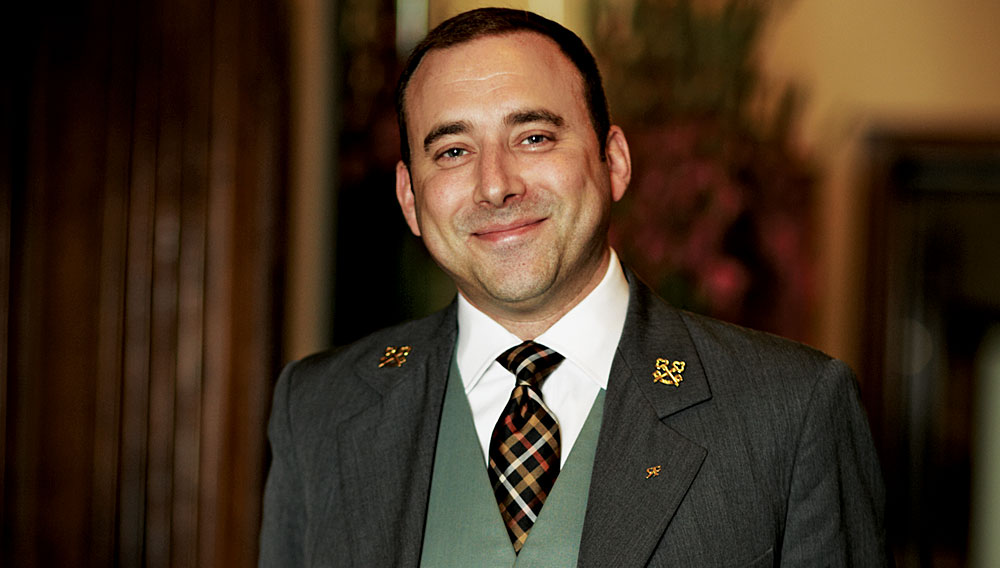 Walk in the door of London’s oldest hotel and go straight back under the staircase, and head concierge Simon Thomas will be standing behind the desk on your right. The 40-year-old Thomas joined Brown’s—which debuted on Albemarle Street in Mayfair in 1837—when it reopened as the Rocco Forte Collection’s stylish 117-room flagship hotel in 2005. Charming and sincere, Thomas excels at making personal recommendations in a personable manner. “Sit down with your concierge and get a cup of tea,” he advises. “We do come out from behind the desk to talk to you.”

Brown’s general manager, Stuart Johnson, also joined the hotel in 2005—and also has a knack for fostering a friendly atmosphere. Intimate public spaces further contribute to the property’s warm environment. Among the more inviting spaces is The Donovan Bar, where celebrities and local suits hide out in low-lit booths and order from a novel-length cocktail menu. Brown’s legendary afternoon tea is served between two small dining areas adjacent to The Donovan and features scones that “are made in an oven the chef ordered especially for scones,” says Thomas. Brown’s Hotel London, +44.20.7493.6020, www.brownshotel.com

If you stop by The Dorchester’s concierge desk first thing in the morning, don’t expect to find Andy Davies. The fun-loving 43-year-old, who has served for two decades at The Dorchester, frequently works late into the evening “scouting” London’s best restaurants and nightclubs. Davies’ efforts—and, more important, his connections—always pay off for his guests. “There hasn’t been anything I’ve been asked that I haven’t been able to do,” he says with a wink, “that is, within the rules of our hotel policy.”

Davies’ playful approach seems appropriate at The Dorchester, a venerable yet whimsical landmark on Park Lane in Mayfair. The hotel’s decor seems the stuff of fairytales, with dollhouse-like hallways where fire doors swing open automatically when you approach. Inside the 248 guest rooms, televisions are hidden inside antique furniture, often at the foot of the beds (which are the most comfortable in London). At The Grill restaurant, located across the hotel’s interior promenade from the Michelin three-star Alain Ducasse at The Dorchester, comical murals depict fancy Scottish gentlemen sneering at perturbed ladies—appropriate company for enjoying a fine bit of black pudding. The Dorchester, +44.20.7629.8888, www.thedorchester.com

Colin Short views his position at The Lanesborough—a St. Regis hotel housed in the former St. George’s Hospital building in Knightsbridge—as “the easiest job in the world.” The 54-year-old head concierge established his reputation in London at the nearby Stafford hotel, where he worked for more than two decades before joining The Lanesborough 16 years ago. His considerable pool of contacts helps earn him last-minute Friday-night tables at top restaurants and gain access for his guests to members-only clubs.

Geoffrey Gelardi, the managing director at The Lanesborough, also seems to know everyone in London—from whose girlfriend is pulling up in one of the hotel’s two chauffeured Rolls-Royce Phantoms for dinner at Apsleys to which celebrity is lighting up in the Garden Room cigar lounge. Gelardi’s army of butlers serves The Lanesborough’s 95 rooms and suites, guests of which are presented with a private fax number, business cards, and personal stationery upon check-in. The Lanesborough, a St. Regis Hotel,+44.20.7259.5599, www.lanesborough.com

Though his father, Johnny, was a longtime concierge at London’s Lanesborough and Berkeley hotels, Andrew Holkham did not get his break in the hospitality world strictly based on connections. “I was employed by my height,” he quips. “I started at age 16 as a little page boy at the Grosvenor House Hotel. I think the only qualification was that you had to be under five-foot-two—and then you were in!”

Holkham has grown a few inches—and cultivated an extraordinary knowledge of London—in the ensuing decades, a time in which he has served at hotels including the Landmark London. The 42-year-old London native joined the Connaught in 2005 and remained on staff while the red-brick jewel on Mount Street underwent a $150 million renovation. Of the renovation’s many highlights, Holkham counts the Aman Spa, the fine-dining venue from Parisian chef Hélène Darroze, and the 3,000-square-foot Apartment suite designed by David Collins among his favorites. Collins also designed the popular Connaught Bar, where, according to Holkham, “there are more pairs of [Christian] Lou­boutin shoes walking around than at a catwalk show.” Connaught, +44.20.7499.7070, www.the-connaught.co.uk

At 34, Ben Malpass is the youngest concierge on our panel. The Australia native joined The Savoy—a gleaming Art Deco landmark just off the Strand—in July 2010, a few months before the historic hotel’s grand reopening in October. Previously he spent five-and-a-half years at The Cavendish London, where he developed a reputation for being straightforward and pragmatic. Malpass is happy to speak at length with his guests, but he is quick to point out shortcomings, recommending that you go to a particular pub for beer, “but don’t eat there.”

Guests have been eating well at The Savoy since it first opened in 1889. Originally managed by legendary hotelier César Ritz, the property hired famed French chef Auguste Escoffier to man its kitchens. In late 2007, the hotel closed for three years of restoration work that cost a reported $300 million. Among the many improvements and additions to the 268-room property is the Art Deco–style Beaufort Bar, Malpass’ “personal favorite of The Savoy’s public areas.” The Savoy, a Fairmont Managed Hotel, +44.20.7836.4343, www.fairmont.com/savoy

Michael de Cozar, 53, embraces his position as the first face people see when they walk into The Ritz London from Piccadilly street. “I’m an actor, I’m on show,” he says. “I greet everyone with ‘Welcome to The Ritz, how can we help you?’”

De Cozar has held his post for 37 years, making him the longest-serving head concierge in London—and nearly as famous as The Ritz itself. Opened by hotelier César Ritz in 1906, the property is now owned by businessmen brothers Sir David Barclay and Sir Frederick Barclay, who have spent nearly $80 million in renovations. The hotel’s 137 guest rooms have all been updated in the last decade, but they still uphold the rich heritage of The Ritz.

Foremost among the hotel’s traditions is afternoon tea, which is famously served in the formal environment of The Palm Court. At The Ritz Restaurant, formality kicks into high gear with dancing on Friday and Saturday nights. “Right now,” says de Cozar, “there is no other restaurant in London that offers dinner and dancing.” The Ritz London, +44.20.7493.8181, www.theritzlondon.com

“It was a bit scary coming back to London,” concedes George Murray, 49, who recently returned to the Four Seasons Hotel London at Park Lane after seven years at the Four Seasons in Hampshire. “A lot of things have changed in the past few years.”

Murray’s 10-story base, set just across from Hyde Park in Mayfair, reopened in January following a two-year, $200 million renovation that included several high-tech upgrades and contemporary-design updates. To keep pace with the changes, Murray overhauled his 10-person concierge staff. “I thought about whom we had before,” he says, “and all of them were more or less middle-aged, middle-class men—same as me.” Murray invited some of the old crew back but also recruited young women from personal-assistant positions and even some talent from “the edgier London hotels,” compiling a team that today is as fresh and polished as the reborn Four Seasons. Four Seasons Hotel London at Park Lane,+44.20.7499.0888, www.fourseasons.com/london

With 20 years of experience in central London, Matt West is as much of an asset to the Mandarin Oriental Hyde Park as the hotel has been to him. “I was at a four-star deluxe, but I really wanted to work at a five-star,” recalls West, 44. “I was very lucky when Mandarin Oriental took over the Hyde Park Hotel.”

The Hong Kong–based hospitality chain reopened the hotel on Knightsbridge street—across from Hyde Park on one side and the Harvey Nichols department store on the other—in May 2000 following an extensive renovation. Always famous for its parties (the hotel hosted the 80th-birthday celebration of Baroness Thatcher and is quite popular with brides for its Hyde Park views), the Mandarin has more recently become London’s top spot for gourmands. Last year the hotel teamed with New York–based French chef Daniel Boulud to open Bar Boulud London, where “the Tunisienne sausage is fantastic,” says West. And just before press time, London’s most highly anticipated restaurant, Dinner by Heston Blumenthal, debuted at the hotel to rave reviews. Mandarin Oriental Hyde Park, London, +44.20.7235.2000, www.mandarinoriental.com/london

“If you were with me for a week in London, I could convince you to live here,” claims Claridge’s concierge Martin Ballard. Indeed, after three decades at the post where he started his career as a concierge, the 50-year-old Ballard retains an infectious enthusiasm for his hometown—a trait that makes him a favorite with returning guests.

Ballard’s guests at Claridge’s, a London legend located on Brook Street near Grosvenor Square, pass his post on the way through the bustling lobby that connects the Foyer café, Fumoir bar, Gordon Ramsay restaurant, and Claridge’s Bar. The property’s public spaces have been places to see and be seen ever since William and Marianne Claridge opened the hotel in the mid-1800s. It has been rebuilt and redecorated several times in the subsequent century and a half, and today prides itself as a showcase for the work of such designers as Thierry Despont, David Collins, and fashion icon Diane von Furstenberg, who last June unveiled the first of several new suites she is creating for the 203-room hotel. Claridge’s, +44.20.7629.8860, www.claridges.co.uk