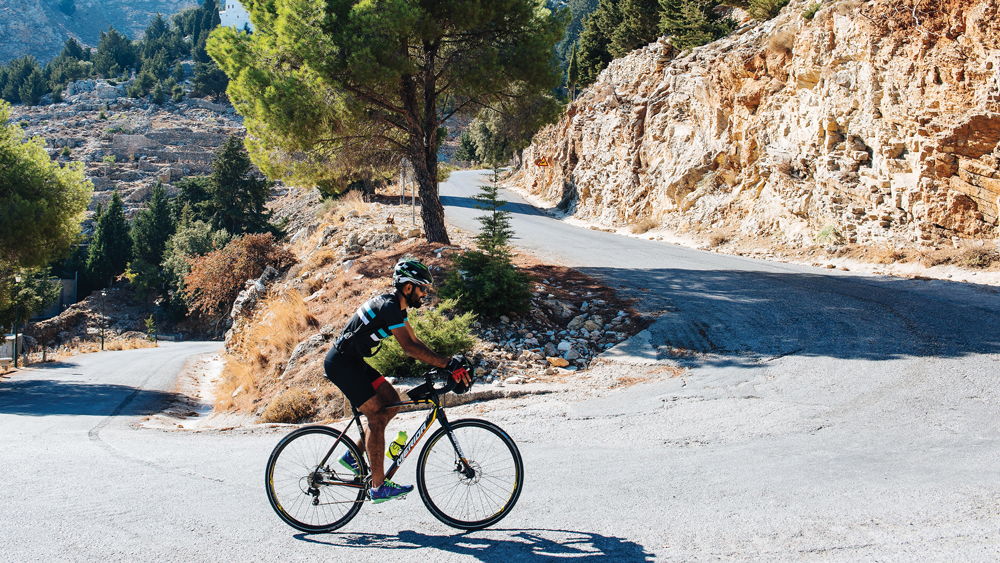 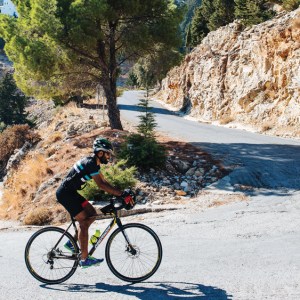 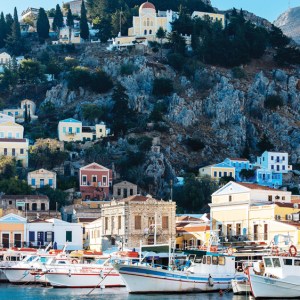 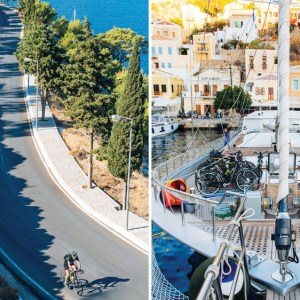 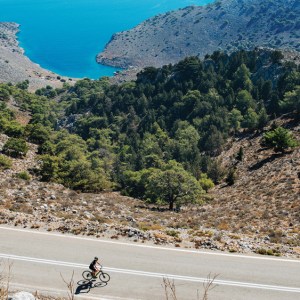 We are biking up the side of a volcano. As one would expect, it’s steep. Breath-pilfering, leg-cramping steep. Laval boils in my calves with each crank of the pedals. The road switchbacks up the flanks of towering rock, ever upward.

This is the Greek island of Nisyros, and the road leads to the village of Nikiia, a 60-person settlement built on the volcano’s rim, with views directly into the still-hot crater. I’ve been promised that a cold, freshly squeezed lemonade will be waiting for me in the town. Zeus willing. Looking over my shoulder, I’m graced by a view of the Aegean Sea glittering below. A thousand pinpricks of light bounce off the softly undulating blue. Our sailboat, the Kaya Guneri Plus, bobs placidly in the expanse.

Hours from now I will cannonball back down the mountain, whooping wildly as I lean headlong over my bike, volcanic rock and greenery flashing by. There will be cold drinks waiting on board the yacht, too.

Until then, there is only one way to reap either reward: Keep pedaling.

Nobody said biking through the Greek Isles would be easy. The Dodecanese Islands are sprinkled throughout the southeastern Aegean and are perhaps best described as high, craggy mountains sunk into the azure waters as if magically dropped there.

A port on Symi  Courtesy of Gwen Kidera

According to legend, the island of Nisyros was formed during a battle between the god Poseidon and an immortal giant (a not-so-unusual occurrence in mythical Greece, apparently). The sea god tore off a huge chunk of a nearby island and smashed it atop the giant’s head, pinning him to the bottom of the sea forever. The new land mass became Nisyros, while the giant’s angry subterranean shouts formed the volcano.

Few places have such rich history or grandiose stories as these ancient sea routes, and a sailboat is still the best way to travel among them. If it was good enough for the likes of Hercules and Odysseus, it’s good enough for me. But I doubt even a demigod like Hercules had it so good.

I am a guest of DuVine, the luxury biking tour outfitter based in Boston, as we take on five islands in eight days (from $7,000 per person, private tours can also be booked). We usually sail between them in the early mornings, and each day includes a ride of up to 30 miles. Haphazard driving styles on these islands can make for tricky biking, but the roads we take are uniformly good, with little traffic. There’s always one biking guide up front, another in the rear, and a sweeper van is available to pick up guests who have had enough for the day—or just want to skip the next big climb. The other guests— six in all—are a mix of hardcore and more relaxed bikers. One gentleman with the telltale calves of a dedicated cyclist always wants a few more miles and is continually jumping ahead; another is happy to tarry over a Greek coffee at a break spot and van-hop as necessary. The guides accommodate all of these desires.

Yaşar Demiroz is one such guide. An ultrafit athlete who grew up in Turkey and is just shy of 30, he’s become my smiling shadow over the last few days, alternately riding alongside or falling back. He realized early on that moderation is not my strong suit. I like to attack the hills to the point of shaky exhaustion—and then fly down the descents fast, sometimes dangerously so.

And so Yaşar and I finally ascend the volcano, which reveals itself as a crater in the center of a rounded mountain, a full two-and-a-half-miles wide and some thousand feet down. Over the eons the volcano collapsed into itself, forming a caldera. It last erupted in the late 1800s.

A village of gleaming white walls and brilliant blue shutters is perched on the very edge of the abyss. It’s a fantastical sight, yet another Greek myth. I’m soon off my bike and being handed a very real lemonade by the owner of a café. His family has been here generations, he says, and I ask what it’s like to live on top of an active volcano. Doesn’t he worry? “We worry 365 days a year, 24 hours a day,” he says, then smiles. “But look at our view.”

Right: the Kaya Guneri Plus  Courtesy of Gwen Kidera

The Kaya Guneri Plus, a 118-foot-long Turkish gulet, is an elegant teak-and- mahogany yacht with a proud prow and white sails—the kind of vessel that has plied these routes for centuries. It has six guest cabins, each with a private bath and shower, including a throne-side view out the bathroom porthole. With only three couples from the U.S., Canada, and Australia, and myself, there are more staff than guests. The yacht is supremely comfortable and very private.

Ours is a happy group with many commonalities, perhaps because any guest who opts for a biking tour is active, fit, and likely a bit competitive. “I took one look at all the hard abs in this group and thought, ‘Uh-oh, maybe I should have spent more time on the bike,’ ” says Mark, a Canadian surgeon, as he takes a sip of beer on deck after a hard-fought ride. “But you know, this is a perfect combination of work and play.”

Over the week the islands come and go in a rippling kaleidoscope of ports, coves, villages, and warm sea waters. While the Greek names run together—Kalymnos, Kos, Nisyros, Symi, Rhodes—the places themselves do not. Each isle has a distinct personality, from the super-cute harbor village of Symi to Rhode’s big-island bustle. The bikes prove a phenomenal way to explore: slow enough to nod at villagers and evade the scrabbling goats, but efficient enough to cover plenty of ground.

I’m usually awake with the sunrise, fresh light revealing the remote cove that we anchored in overnight, the ancient medieval battlements fronting a still-inhabited Roman city, or the $30 million yacht docked next to us.

An early morning regimen swiftly becomes habit: solo stretches on the front deck as the chief steward, Ali, brings me a small bowl of walnuts. On the first day, he noticed me scarfing down the fresh nuts, so Ali began delivering them, unbidden. The captain, staff, and guides are Turkish, and they provide the type of warm, deft service that you wish you’d get in many luxury hotels.

Mark and his wife, who own a boat on the Great Lakes, make note of the harmony among the crew, especially considering the fraught nature of maneuvering the gulet among the Mediterranean superyachts. “I bought my husband a T-shirt that says, ‘I’m sorry for what I said while we were docking,’ ” says Pam, laughing. “But there’s none of that here.” Our bike rides are over by 2 pm, and afternoons stretch out lazily, with guests jumping into the sea and sun lounging. Afternoon beers and lunch segue to evening cocktails and a massive dinner and then to late-night cocktails, all served on deck. Our chef is young and shy, but the food that flies out his kitchen tastes incredible. Heaps of Greek and Turkish dishes: ultra-fresh salads, tantalizing tzatzikis, piquant moussaka, succulent octopus, flaky fish. How it is all made in the ship’s tiny galley becomes a focus of the guests.

At one point I awake from a nap to find we are under sail, sheets of white canvas snapping in the wind. Curious about our location, I pull up Google Maps to find a Turkish peninsula is to our immediate north, Egypt due south. We may still be in Europe, but we are closer to Cairo than, say, Rome. That’s something that a maritime adventurer like Hercules would have appreciated. We are far away from our normal lives.

Back at it again: My head is down, my breath ragged. We are on the island of Symi, a series of hump- back mountains that was name-checked in Homer’s Iliad. There are terrific views, but I’m too tired to look at them. The ride that began at sea level is a nonstop ascent to 1,600 feet. Our aluminum bikes aren’t geared correctly for steep ascents like this, and I’m cursing the machine. (The company is getting lighter, better bikes next year.)

I’ve abandoned my attack mode. I just want to get up this damn hill. Even a beer and the excellent food aboard the yacht seem very far away.

And then my shadow, Yaşar, appears next to me. He looks over, assessing. Suddenly his cell phone starts playing music. For a moment I think it’s his ring tone—but no, he’s triggered a tune on purpose. It is a single, driving violin: “The Kiss,” a song from the Last of the Mohicans soundtrack.

My head picks up. My pedaling falls into cadence with the propulsive music: faster, determined, ebullient. I look over at Yaşar and smile. I didn’t even know, at that moment, that I wanted to be pushed. He did, and the music is perfect. “One last big hill,” he shouts happily.

And so we attack the mountain, ever upward, flying to the top of the world and atop Greece itself. It is mythic.