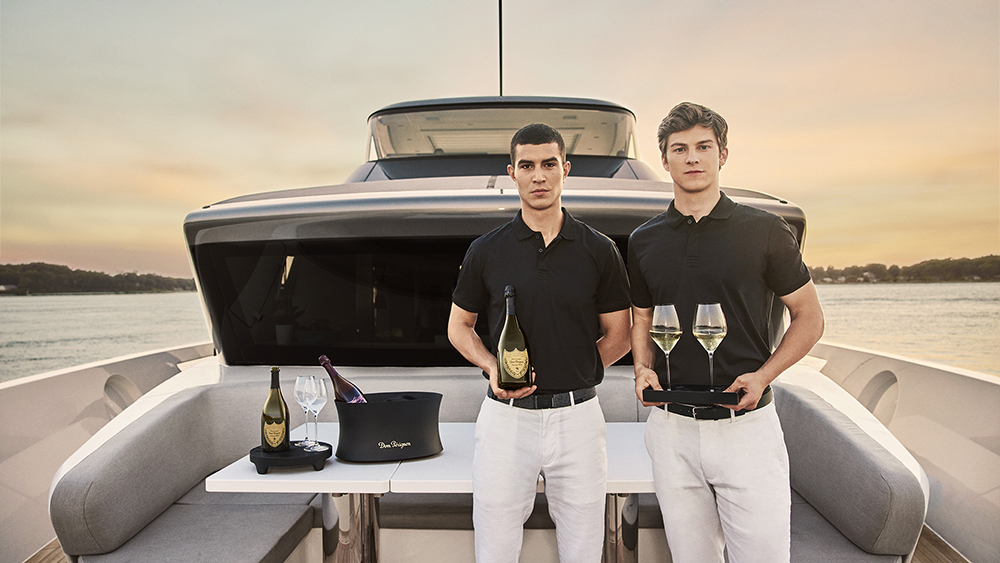 Dom Pérignon wants to be your new shipmate.

The French Champagne house has teamed up with Michelin three-star chef Masa Takayama to offer guests a lavish gastronomic experience aboard a luxury superyacht in the Hamptons.

The 88-foot San Lorenzo vessel–which was customized by Dom, no less–will cruise the waters of Sag Harbor and Montauk throughout the month of August. Designed for up to six guests, each trip begins with a door-to-dock chauffeur service from the Hamptons to either the Sag Harbor Marina or Gurney’s Star Island Marina in Montauk. Once onboard the yacht, guests will enjoy a four-hour private cruise with a dedicated butler, a special Champagne concierge and a DJ to play their favorite tunes.

The highlight, of course, will be the food. Takayama, the chef behind the acclaimed three-star Masa in New York City, has created a special sushi omakase menu that pairs with Dom’s recent vintages, including the 2012, the 2008 Rosé and the 2003 Plénitude 2.

Much like Dom’s prized bubbly, Takayama’s cuisine is refined and elegant. The dishes, which will be meticulously prepared in the yacht’s impressive open kitchen, will showcase authentic Japanese ingredients and techniques. Put simply, it’ll be a cut above your average nigiri.

Dom’s latest vintages will be poured onboard.  Daniel Seung Lee

“This experience with chef Masa allows us to come together in an unexpected space that embraces our traditions while daring us to explore a culinary thrill in a place of ultimate luxury,” Dom Pérignon’s VP Isadora Bailly said in a statement.

Dom first dipped a toe into the marine industry with a yacht concierge concept that debuted last December at Art Basel in Miami Beach. The house says this ultra-elevated superyacht is designed to open up a new realm of possibilities, though. Dom cruise ships next?

The yacht packages start at $15,000 and can run up to $30,000 if you opt for Takayama’s menu. Trips will take place from August 17 through the end of the month. You can email reservations@lesbullesdor.com to make a reservation. That’s your summer cruise sorted then.