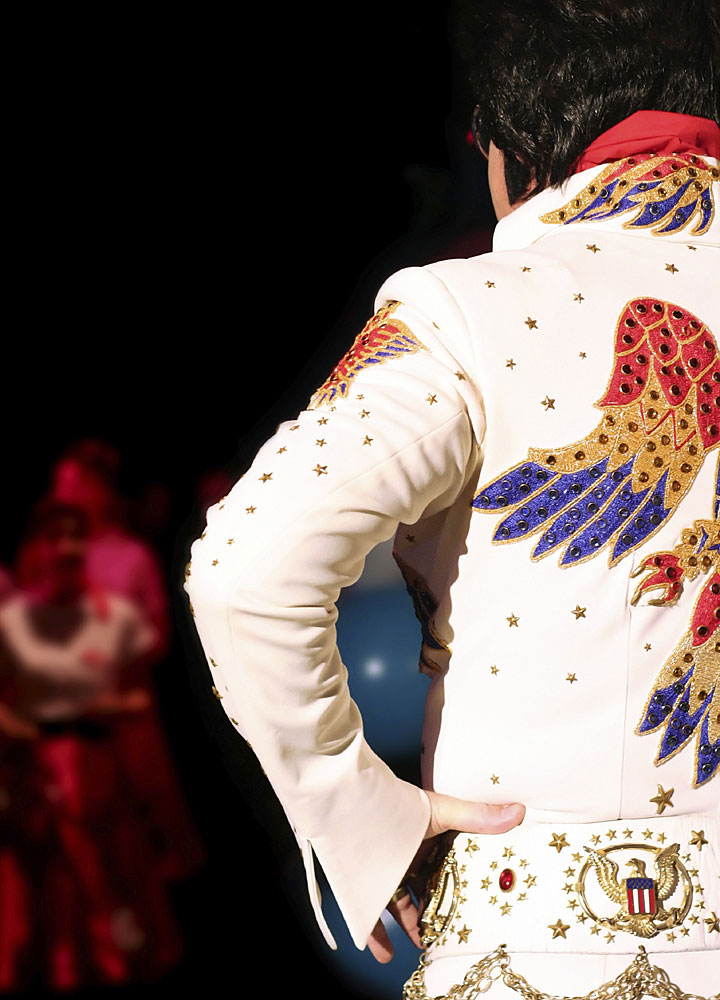 The King is dead; long live the King’s earning power. Elvis Presley’s estate grossed $49 million last year, the 30th anniversary of his death, enabling him to reclaim his status as the world’s top-earning deceased celebrity. I have been to Graceland, the headquarters of Elvis, Inc. More than 15 years ago, I toured the jungle room and the Lisa Marie private jet, saw the racquetball building that houses the toilet on which Elvis died, and took photos of fans weeping at his graveside. At the very end of the visit, I listened to a tour guide deliver a description of the circumstances surrounding the singer’s death that could not have lasted longer than five seconds.

I have also been to Las Vegas, where once, in the mid-1990s, I happened to drive by the Graceland Wedding Chapel at the moment that the Elvis impersonator who performed there during nuptials was arriving for work. His hair was tall and perfect and as jet black as the sideburns that extended down beyond his jawline. But he had emerged from a rusted and dented 10- or 15-year-old Buick, and because he had not yet changed into his work clothes (presumably a sequined jumpsuit), his belly hung slightly below the untucked front of his button-up, short-sleeve shirt, which clung a bit too tight to the rest of his torso.

I witnessed a sight no less dispiriting later that night, in the ring at the arena attached to the MGM Grand. Earlier that week, a pugilist whom I, as a sports editor at the time, had been covering announced his intentions to wrap his opponent “in a cocoon of horror.” The declaration was original, creative, humorous, and ultimately laughable, for the opponent was Mike Tyson, who had just finished serving a three-year prison sentence. The former champ was going to be rusty, but his opponent that night was, to use the boxing parlance, a tomato can. His best attributes, at least from the perspective of the promoter, were his skin color and his ethnic background. “Irish,” as the promoter had dubbed him, barely had time to remove his emerald green robe before the bout ended. Eighty-nine seconds into the first round, the fighter’s manager, recognizing the inevitable, threw in the towel.

The manager’s decision to save his fighter from a sure pummeling left me in a quandary, for I had to fill enough newspaper pages to justify the expenses that my publisher had incurred by sending a staff photographer and me from across the country to Las Vegas. To mitigate the fallout, we subsisted on $2.99 buffets during the rest of our stay, and then I consumed copious column inches by describing the backstory, the events and circumstances that preceded the hometown hero’s 89 seconds of ignominy and explained why the event mattered.

In addition to limiting my dining options and challenging my creativity, the fight also rendered valueless an item that I had acquired several years earlier and by chance had retained. It was a promotional poster for the 1991 match between the era’s two top heavyweights: Tyson and Evander Holyfield. The fight did not go on as scheduled, because Tyson had been arrested, tried, convicted, and incarcerated. After resuming his boxing career, Tyson went on to fight Holyfield twice, the second encounter ending when Tyson bit off a portion of Holyfield’s ear. Had Tyson never returned to the ring, the poster would have retained historical and perhaps monetary worth, however heinous the reasons.

Robb Report, which with this issue begins its 33rd year of existence, generally is a cocoon of bliss, one that the world’s uglier realities seldom penetrate. The magazine is intended as a kind of sanctuary, where watches and jets and yachts and vacation destinations are celebrated and where their creators are praised.

To the exclusion of significant though unpublicized information, the editors and writers always could, metaphorically speaking, blithely follow the tour guide or avert their eyes when the impersonator is out of uniform. But we presume the connoisseur, seeking to fully understand the values and relevance of the items we cover, prefers that we delve as deeply as we can into the backstories, though some elements in those stories could puncture the cocoon. Thus our goal is to place items in proper perspective, even if occasionally we do so at the risk of offering—to employ a sanitized version of a phrase uttered by David St. Hubbins (or was it Nigel Tufnel?) as he and his band mates knelt at Elvis’ grave in Graceland—a bit too much perspective.