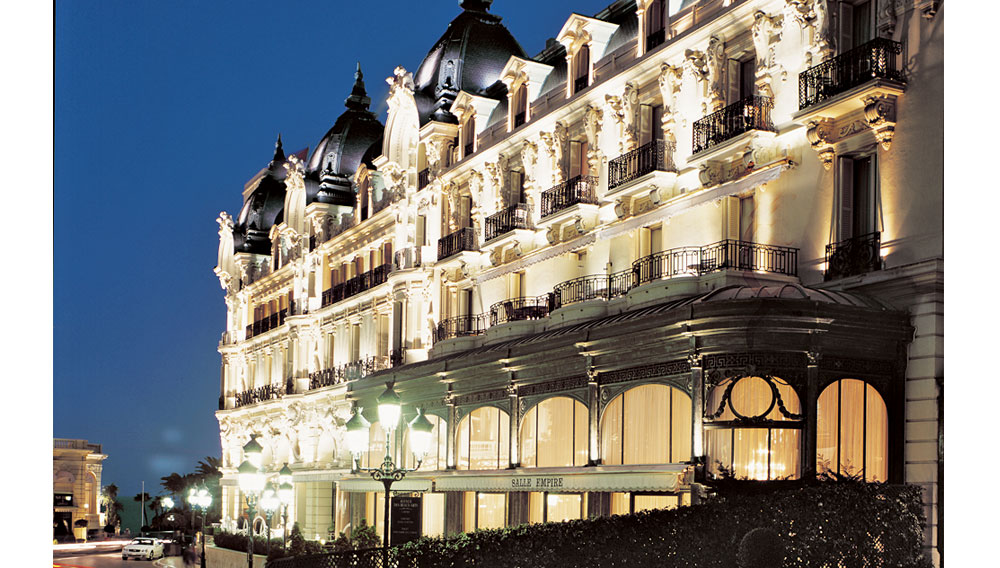 The majestic hotels that gleam like beacons of refuge amid the bustling boulevards of the world’s metropolises entice the traveler with their picturesque panoramas and storied pasts (see “The Robb Report 100,” page 91); yet few if any of these establishments can claim the same curious distinction as Monaco’s Hôtel de Paris (pictured), whose city was created to contain it. Along with its equally ornate sister structures, the Casino de Monte-Carlo and the Café de Paris Monte-Carlo, this florid edifice served as a central feature of the theme-park-like enclave that François Blanc erected in the Mediterranean principality during the 1860s. The Frenchman was well equipped to transform a tiny sovereign state into a lucrative gambling resort, having successfully reconceived Bad Homburg in the landgraviate of Hesse-Homburg as a remunerative watering hole. In Monaco he hoped to prove as proficient at separating his clientele from their coin. Still, Blanc, who built this fledgling enterprise, was not the original author of the scheme; that distinction belonged to Monaco’s Princess Caroline, the onetime French actress who, in 1816, married Prince Florestan, the second son of Monaco’s ruling house.

At the time of the marriage, the Grimaldis, whose forebears had reigned as titled sovereigns of the principality since 1338, struggled with the serious financial reversals they had suffered during the French Revolution, when they lost control of Monaco and their French territories. Only with the Congress of Vienna in 1814 did Honoré IV, Caroline’s eventual father-in-law, recover these properties—though not the income lost during the family’s ouster. To compensate, his eldest son and successor, Honoré V—who until his coronation in 1819 had never set foot in Monaco—taxed his subjects heavily to finance his own regal Parisian existence. In 1841, when this bachelor prince choked to death while dining alone in his palace, his equally indifferent brother ascended the throne. Florestan I was a reluctant ruler, but his wife displayed no such timidity; she was determined not only to restore the principality’s prosperity but also to advance the Grimaldis’ position among Europe’s governing elite.

Before her husband’s accession, Caroline had adroitly managed their affairs, and she transferred these domestic prerogatives to the palace. Even in 1856, when her son, Charles III, was crowned, she remained the de facto ruler. As one historian noted, “For twenty-five years, she had been used to holding the reins and having matters left to her by a husband uninterested in politics … and so she quite sincerely believed she was doing her duty by him in not ceding an inch of power and authority, not even to their son.”

Though Princess Caroline named Monte Carlo for Charles and allowed him to take credit for recruiting Blanc, she was the one who assiduously courted the French entrepreneur, sending him boxes of Monaco’s celebrated citrus and extolling the virtues of the principality’s mild climate to Madame Blanc, who suffered from arthritis. These entreaties prevailed, and by 1863, Blanc’s armies swarmed the construction site, covering its rocky terrain with imported soil from which, under Caroline’s watchful eye, the Place du Casino, with its exquisite buildings, blossomed like an exotic flower to sweeten the princely coffers.

Relieving the Grimaldis’ financial woes, however, did not prevent her from pursuing her social ambitions. Impressed by the stability of the British royal family relative to its European counterparts, Caroline sought to arrange a marriage between her grandson, Albert (Charles’s heir apparent), and a cousin of Queen Victoria. When this intrigue failed, she turned her attention to another candidate, Lady Mary Victoria Douglas Hamilton, the daughter of the 11th Duke of Hamilton. Neither the prospective bride nor the future groom was enthusiastic about this alliance, but Caroline eventually triumphed.

When the dowager princess passed away in 1879 at age 86, she no doubt took comfort in the belief that she had achieved her aim of strengthening the family’s position politically and socially. Yet her well-laid plans rapidly unraveled after her demise. Though his finances were much improved, Charles, now a widower, went almost completely blind and ended his days as a recluse. Albert, for his part, separated from the wife his grandmother had so painstakingly secured for him and, in 1880, obtained an annulment that, curiously, preserved the legitimacy of his son, Louis. Thus, of Caroline’s meticulously constructed schemes, only the Place du Casino still stood.