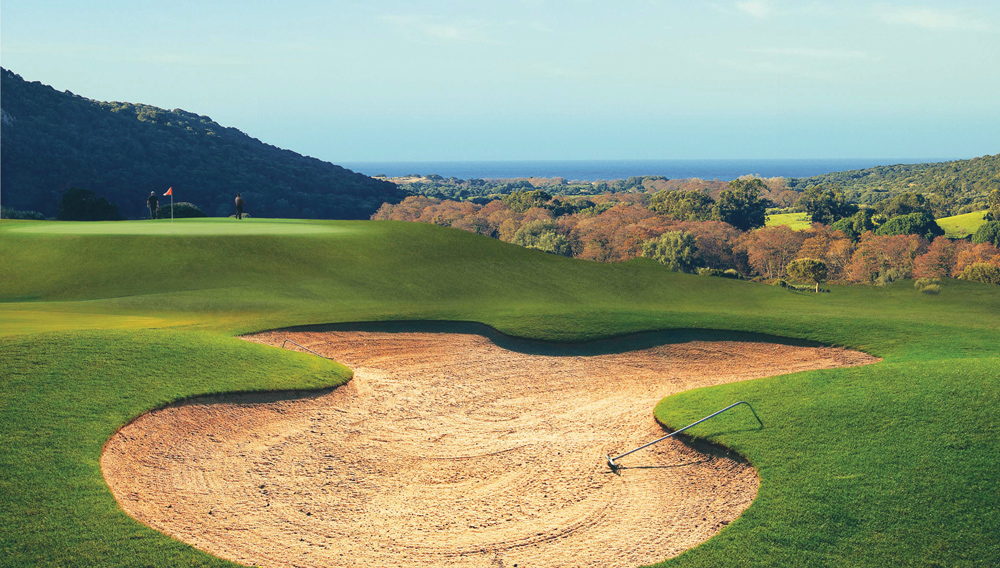 Even among the many villa and farmhouse getaways in southern Europe, Domaine de Murtoli stands apart. The resort, which opened 20 years ago on the mountainous French island of Corsica, offers an incomparable Mediterranean countryside experience to its few guests, who stay in 17 homesteads scattered throughout the 6,000-acre property. The residences—converted shepherd’s huts dating from the 16th and 17th centuries—epitomize rustic luxury with open fireplaces, oversize stone sinks, tiled and chestnut floors, and La Cornue cookers. Guests can lounge by their stone-lined swimming pools (all but one of the villas have them), go horseback riding on rugged coastal trails, organize hunts for wild boar and duck, or make for one of the beaches and aquamarine coves that stretch for six miles along Corsica’s southwestern shore.

Given Domaine de Murtoli’s one-of-a-kind setting, the property’s latest amenity—a multidimensional golf course designed by Kyle Philips—is a suitably singular creation. The course, which can be played clockwise or counterclockwise and in 47 different tee-to-green combinations, harks back to the origins of golf. “In the early years of the game, there was not a standard number of holes or par,” explains Philips, the California-based designer behind Kingsbarns in Scotland and several other highly acclaimed layouts. “At its core, golf is about shot making and competition among friends, not about par.”

Murtoli’s owners originally envisaged a six-hole course—the number of championship-level holes the allotted space could accommodate—but Philips proposed an alternative. “I suggested a course that was more dynamic,” he says, “a course that allowed players to play over the grounds from a variety of angles.”

The finished product, which made its debut last April, certainly does not lack for variety. Routed through a valley dense with mature vegetation and surrounded by farming tracts, Philips’s course features beautifully constructed green complexes, meandering creeks, elevation changes, and sweeping views of the island’s coastline and soaring saw-toothed mountains. Holes are oriented so as to be enjoyed from multiple directions, approaches, and tee boxes, with lengths ranging from about 100 to 500 yards. Among its many combinations, the layout can be played as a par-31 nine-hole course, a par-44 12-hole course, and a par-67 18-hole course.

The freedom afforded to golfers at Domaine de Murtoli is a direct reflection of the property’s exclusivity. “Murtoli has a limited number of guests who tend to stay for several weeks at a time,” Philips says. “As there are many days where there are just a few guests playing golf, I saw this as an opportunity to create several courses within a course.”