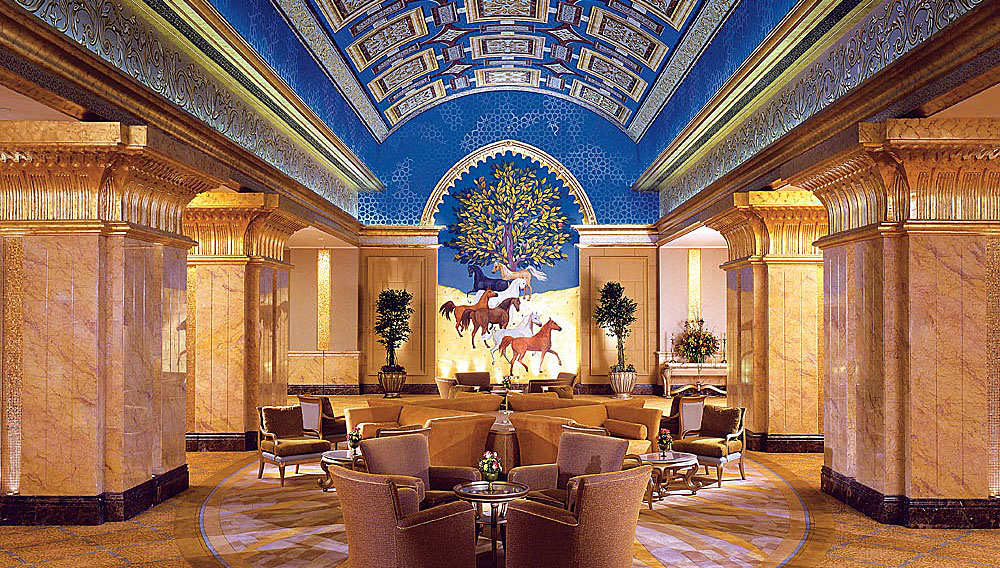 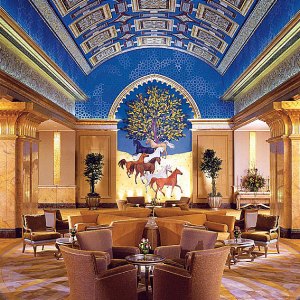 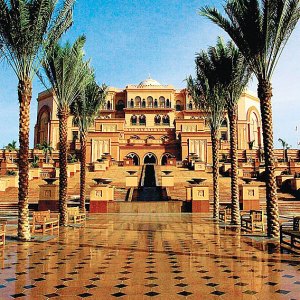 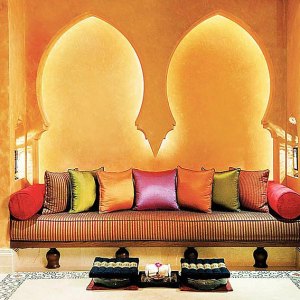 The sheiks in Abu Dhabi witnessed the transformation of Dubai, its fellow United Arab Emirate, from a sleepy, sandy town into a tourist destination of mind-boggling proportions. Inspired by Dubai’s spectacles of creativity and wealth—man-made islands modeled after the earth’s continents, a property formed in the shape of a sail and marketed as the world’s first seven-star hotel—the Abu Dhabians are mimicking the build-it-and-they-will-come strategy. Their answer to Dubai—where every new megastructure is more grand, more expensive, more everything than the last—is Emirates Palace. Its staff of 2,000 includes personal butlers and buggy drivers, who shuttle guests from their rooms to the Palace’s eight restaurants, shopping arcade, private beach, water park, and a Moroccan-themed spa. Al Majlis, a lounge the size of two football fields, is crowned by a gilded, domed ceiling larger than that of St. Paul’s Cathedral in London. Accommodations The hotel has 302 rooms and 92 suites. The 7,300-square-foot Palace Suites have private elevators, three bedrooms, three baths, and lavish dining areas. Facilities The seven-room Anantara spa includes a Moroccan hammam, whirlpools, steam rooms, and an ice cave. The hotel also features four tennis courts, two swimming pools, two indoor fitness rooms, an outdoor fitness center, a private beach, a convention center, and a comprehensive range of meeting areas for as many as 1,200 participants. Dining Seafood at Sayad, Italian at Mezzaluna, Middle Eastern at Diwan L’Auberge, Persian at Anar, and a little bit of everything at Le Vendôme Brasserie buffet. For the best ambience, try drinks and caviar at Al Majlis, cigars and Cognac at the Havana Club, dining outdoors at Cascades and Las Brisas, or a meal at the Palace Ceremony, a private restaurant available to one party at a time. Concierge Recommends Visit Liwa Oasis in the Rub’ al-Khali desert and take a sunset camel ride surrounded by freshwater pools, date plantations, and sand dunes. Rates From $735 to $11,430.