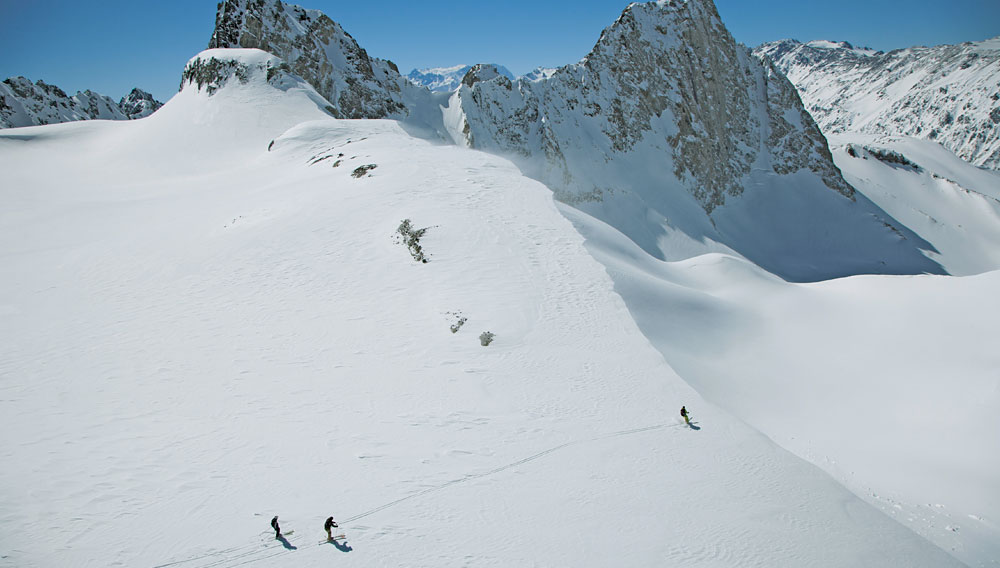 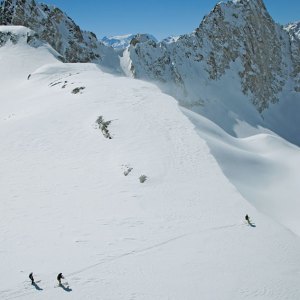 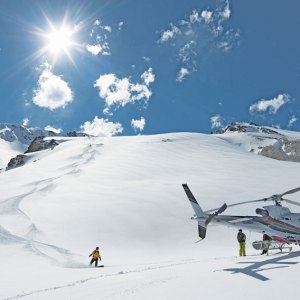 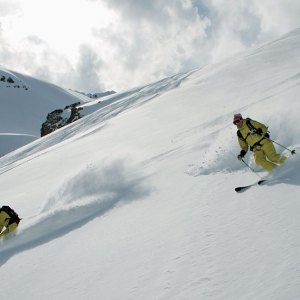 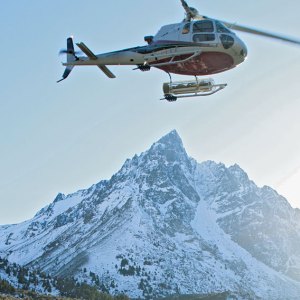 World-record holder Mark Jones just made a rookie mistake. Already too far down a powdery chute, he attaches skins to the bottoms of his skis and begins to climb the slope he descended moments before. The 55-year-old guide moves quickly, steadily up the steep incline, his fluorescent snow pants swishing back and forth like a metronome. “I got confused, thought we were one bowl over,” he explains as he reaches the top. “The important thing is that we’re all OK, safe.”

Helicopter skiing can be risky business—especially in places where no one has ever skied before. But the unknown does not faze Jones, a career ski guide who serendipitously discovered more than 50 glaciers in the Chilean Andes in 2005. He soon held claim to an exclusive 40-year lease for helicopter rights to the largely unexplored region, which spans three mountain ranges and 2,000 skiable square miles.

Late last season Jones—who in 1994 broke the world record for vertical feet skied in a single day—launched Chilean Heli Ski, an operation unprecedented in the Southern Hemisphere. Based just 30 minutes by helicopter from Santiago, the company hosts heli-skiers at its new 24-room lodge from late June through late September. The skiers have unfettered access to the Andean terrain, which includes the largest glacier in the Central Andes—and countless opportunities for first descents.

On this day, Jones is leading a trip with a group of Russians, who are here to ski the expanse’s 45 named runs and make a few first descents of their own. With Jones up and out of the chute, the group takes a steep, short (about a half mile) fall-line shot to meet their svelte Eurocopter AS350 B3. The small, maneuverable machine—the same model used for flight tours of Mount Everest—is ideal for the rugged, high-altitude terrain.

“We used to call this place White Rock,” Jones says atop the next run. “But now we’re calling it Snow White and the Seven Dwarfs, because there are at least seven paths down.”

Jones points to Toblerone, a mountain he named for its resemblance to the chocolate bar and Switzerland’s Matterhorn. The highest visible peak, at about 17,500 feet, stands taller than Mont Blanc—the highest mountain in the Alps. Argentina’s border to the east and the Cipreses National Park to the west bound Chilean Heli Ski’s magnificent concession.

Opting for a new route, Jones launches himself over a ridge and skis out of sight. A Russian soon follows, steering to the left of Jones’s track into the light, dry powder. The run goes on and on and on. (Jones believes that the concession’s longest continuous run is nearly 10 miles.)

Out of breath at the bottom, one of the Russians attempts to describe the experience. “It is good, but that word is not enough. It’s like wow,” he says, spreading his arms out wide.

Jones and one of the guides discuss naming the newly skied run. Perhaps White Russian, he suggests.

“We saw puma tracks when we first came in,” Jones says while sipping a pisco sour by the fireplace back at Chilean Heli Ski’s Puma Lodge. “And we wanted a name that would be easy for everyone to remember. Everyone remembers the name Bugaboo Lodge at CMH.”

CMH, or Canadian Mountain Holidays, is the company credited with inventing the sport of helicopter skiing in 1965. Today, CMH operates 11 lodges and hosts 7,000 clients in the Canadian Rockies each year.

Jones, a Canadian, had similarly lofty aspirations. His path to Puma Lodge began in the early 1990s, when his winter home of Chamonix, France, began to boom with skiers. Witnessing the pent-up demand, Jones decided to return to Canada and start a private ski club. “We’d put up our own lifts and members could find powder,” he says. “Most of my clients said, ‘We’ll join.’ “

But Canada was booming as well, and the good snow was bought up too quickly for Jones. Today, well-developed ski resorts blanket the best Canadian ranges, and at least 20 heli-skiing operators claim premium off-piste terrain. In Chile, however, only a handful of heli-ski operators exist, and high-end ski hotels are almost nonexistent. “It will be 15 or 20 years before big resort developments arrive here,” says Jones of Chilean Heli Ski’s Andean stretch. “But they will come.”

Jones first spotted the concession’s glaciers while watching a video with one of his clients. The client had been flying in his airplane from Santiago to his summer home in southern Chile, a route that included a bird’s-eye view over remote mountain ranges.

Immediately recognizing the potential of the area—which has been privately owned for generations—Jones started asking around. No one knew anything. Even Google had yet to post a map. So in 2005, equipped with a motorcycle that he borrowed from his brother-in-law, Jones approached the region from the north, huge packs in tow. Jones’s wife, who is Chilean, had charmed the custodians of the land, so the motorcycle was allowed to enter.

On his next trip, Jones again ventured up to the glaciers alone. For six weeks he did snow studies, took photos, and lived in snow caves. Two years later he brought a helicopter to the area for the first time.

“Chile has a lot of financially powerful families, but nobody else had the vision,” says Jones. Luckily, he had a lawyer friend with the right connections in Chile to negotiate with the three families who owned the three mountain ranges, and to help raise funds for the lodge.

Borrowing from his experience in international ski areas, Jones drew up plans for a warm, comfortable hotel with first-rate service. “I wanted to reproduce the feel of a North American lodge with the spacious, acoustic quality of European lodges,” he says. “You get off the jet, have a glass of great Chilean wine, eat good food, and have a great sleep.”

Decorated with bright Chilean textiles and handicrafts, and photographs of the Andean terrain, Puma Lodge offers a local take on the traditional ski lodge. Wines and menu items—arrollado de chancho, asado chileno—at the Alto Las Leñas restaurant further connect guests to their surroundings. The lodge, which is the largest of its kind anywhere in the world, also includes a spa, a bar, pool and poker tables, and three outdoor hot tubs.

Chilean Heli Ski offers several packages at Puma Lodge, ranging from three days of semiprivate skiing in a group of eight ($7,609 per person for 11.5 hours of flight time, or about 50,000 vertical feet of skiing) to six days of private skiing in a group of four ($13,539 per person for 10 flight hours, or about 100,000 vertical feet). All packages include ground transport from Santiago, meals and accommodations, and, for more advanced downhillers, the chance to go where no skier has ever gone before.

Following a hearty breakfast of eggs, cured meats, and soft cheeses, Jones and the Russians head downstairs to the west wing of the lodge. Taking their footwear down from the wall of boot dryers, the team suits up with personal locator beacons and $1,000 SnowPulse backpacks equipped with avalanche air bags, shovels, and probes.

“Las Leñas doesn’t look as good today,” Joller reports. “The surface has been thrashed by the wind. It will be a rock garden.”

“Catedral! There is still much to be discovered,” affirms Medina, handing out harnesses that the skiers are required to wear on the glacier.

From a bird’s-eye view over the Cortaderal range, the Catedral glacier is striking only for its color. Thin rifts of turquoise ice arrest smooth blankets of perfectly laid snow.

The Eurocopter lands, unloads the skiers, and takes off again in a violent puff. After a few easy turns, the group enters an otherworldly landscape that could only have been dreamed up by Gaudí or God. Jagged ice forms tower overhead, dwarfing the skiers.

“No one has been here in thousands of years,” Medina says.

“I’d say maybe 10 people have,” says Jones, who has brought a couple other groups to this spot. “I found one account from 1955, when some mountain climbers came close, but they went around.”

Jones keeps the group close together, watching for disturbances on the snow’s surface. If someone skis over a hidden crevasse in the glacier, they might plummet into the crack; the guides carry ropes in case they need to perform a rescue.

The sharp cracking of ice somewhere below the surface causes every head to jerk.

Then silence. Every person is accounted for. Everyone is OK, safe.

After surveying the group, Jones takes a long, slow look at his surroundings, as if finally realizing his long-held dream. “It’s the same feeling I had after I set the world record,” he says. “You have a four- or five-month high, and then it’s like, what’s next?”