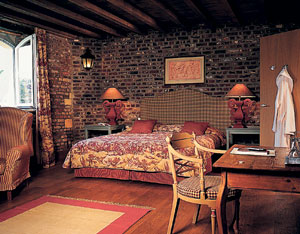 The 12th-century hermit St. Gerlach would approve of his namesake hotel’s remove from the bustle of modern life. But the knight-turned-holy-man, who lived his last decade in a hollow tree, would surely be scandalized by its comforts.

Set on 12.4 acres in the Netherlands’ Geul Valley, Hotel Château St. Gerlach is a 97-room rustic retreat housed in the buildings of a medieval convent. The convent, established next to St. Gerlach’s grave in 1202, shielded noble ladies from worldly temptation for nearly six centuries before becoming a baronial farm estate. In 1997, the convent and farm buildings were transformed into patrician accommodations replete with a Roman-bath pool, sun terrace, Turkish steam bath, sauna, and Kneipp Cure Centre spa. Mortification of the flesh has been out of fashion here ever since.

Centuries of quiet contemplation by its inhabitants, however, seem to have imbued this stretch of the rolling Limburg countryside, just six miles outside of Maastricht, with an undefiled serenity. Visitors experience the restorative power of Château St. Gerlach while meandering through the orchard, reading a book in the herb or rose garden, or hiking the surrounding Ingendael nature preserve, home to Scottish Highland cattle and wild Koniks horses. Ultimately, though, guests are drawn to the hush of the convent’s Baroque church, where restored 18th-century frescoes recount the life of the hermit saint.

On 12.4 acres of green pastures in the Geul Valley, the Netherlands.

Exposed stone and timbers, softened by elegant fabrics, evoke the noble country house of yore in many of the château’s 97 rooms, suites, and apartment suites.

Hot and cold herb baths cleanse away stress in the Netherlands’ only Kneipp Cure Centre, modeled on the teachings of 19th-century priest and naturist healer, Sebastian Kneipp.