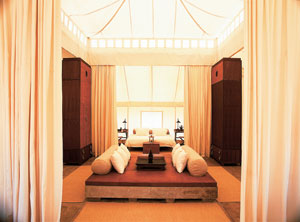 Like the maharajas of yore seated atop the weathered gray hides of their stately elephant transports, guests at Aman-i-Khás in Rajasthan, India, depart in custom open-top jeeps in search of the elusive tiger. The morning sun rises over the scrub forest as the expectant explorers, sipping hot chocolate in the backseat, prepare for their encounter with the majestic cats. Staring into the eyes of a tiger, however, is only part of the adventure at Aman-i-Khás, a new wilderness retreat on the fringes of Ranthambhore National Park.

Once the private hunting reserve of the Maharaja of Jaipur, Ranthambhore has witnessed the rise and fall of many rulers. The latest to conquer this revered territory is Amanresorts founder Adrian Zecha, who, in November 2003, opened the most recent addition to his exclusive resort chain on a gentle slope overlooking the preserve.

Aman-i-Khás echoes the imperial camps—once status symbols providing hospitality and sport for touring Hindu princes—of the mighty maharajas. Supported by steel frames, the contemporary encampment’s six spacious tents belie the luxuries that reside within their canvas walls. Each of the units includes a sitting area, dining room, bedroom, bathroom, and most modern-day conveniences—though television and a morning newspaper are not among the amenities of this regal refuge.

Separate tents on the grounds are available for lounging, dining, and spa treatments, while an open fireplace at the heart of the property warms guests after the day’s journey. Aman-i-Khás is open from November through June, and much like the portable palaces of the traveling maharajas, the resort is dismantled at the end of every season.

India’s maharajas were known for carefully nurturing forests to ensure a regular supply of game for their hunting pleasures. Today, Ranthambhore is a 155-square-mile animal sanctuary protected under Asia’s Project Tiger conservation program. Guests at Aman-i-Khás can take guided wildlife safaris to view the tigers, leopards, hyenas, antelope, sloth bears, and more than 350 species of birds that populate the park.

Meals and house beverages included in the price of stay.

Honor the divine within you with a relaxing Namaste head, neck, and shoulder massage in the Spa Tent, or watch the sun set over the forest during an all-natural henna body-painting session.

The Aman-i-Khás experience includes one night at the Manor in Delhi followed by three nights in the camp itself for $2,300 (single or double occupancy).