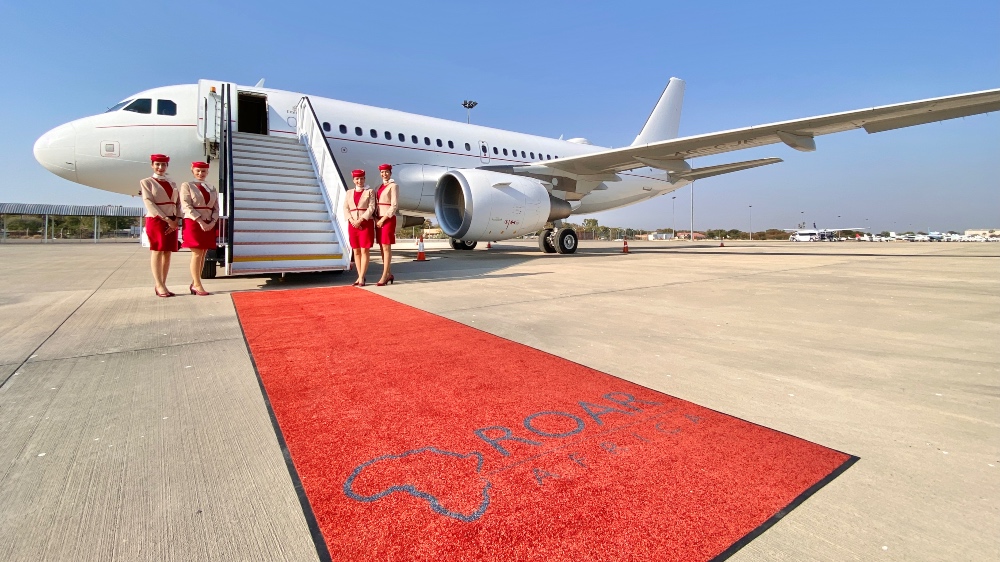 Emirates and Roar Africa are teaming up again for a new collaboration. In 2019, the brands came together to introduce a carbon-neutral private jet safari tour. This month, the luxury tour operator has unveiled exclusively to Robb Report that the duo has come together for a new collaboration—the world’s most expensive private jet safari experience.

The new “Sand, Sea & Safari” itinerary will take 10 travelers to Namibia, South Africa and Madagascar over the course of 17 days. Between May 13 and 30, you will explore the continent through very different landscapes ranging, as the name suggests, from the desert to the ocean.

You’ll start with a stay at the Bvlgari Hotel in Dubai for pre-trip spa treatments—because who doesn’t want to feel relaxed for a safari? The African trip then begins in earnest, as you’ll travel to the Namibian desert, where you’ll spend three days at the Sossusvlei Desert Lodge. The striking resort offers five-star amenities, set amid the country’s arid desert, and affords some of the most spectacular stargazing in the world.

You’ll then be whisked off to Cape Town for a more cosmopolitan vibe at the Ellerman House coastal resort. While there, you’ll get to take any number of side excursions, including hot-air ballooning, a trip to nearby Table Mountain or a walking food tour with a visit to a hidden speakeasy that specializes in gin. There’s also a tour of Robben Island, Nelson Mandela’s one-time prison, led by the leader’s former guard.

After your time in the city, you’ll head to wine country with a brief stay at the Delaire Graff Wine Estate. There you take a safari at Singita to see the big cats and spend afternoons wine tasting with a master sommelier. The two-week adventure concludes amid the rich biodiversity of Madagascar, where you’ll enjoy the island life on Nosy Anko, a tiny isle off the island country. There you’ll stay at the Miavana by Time + Tide resort, which sits right on the edge of the country’s clear blue waters.

When jaunting between destinations, the 10 travelers will fly on the brand’s exclusive Emirates A319 executive private jet. Rather than offer a conventional seat layout, however, the aircraft is outfitted with 10 private “suites,” with a shower, powder room and communal lounge for socializing. There is also a separate dining room.

“This epic trip will showcase the staggering topographic diversity of Africa’s landscapes—from the sand to the sea—in one fell swoop,” Deborah Calmeyer, CEO & founder of Roar Africa, said in a statement. “This opportunity of a lifetime will have an immediate, positive impact on conservation projects on the ground in Africa. Because where and how we travel matters.”

The two-week journey will be offered starting in 2024. For those interested in the grand adventure, prices start at record $163,300 per person. Hey, we weren’t kidding when said it was expensive.