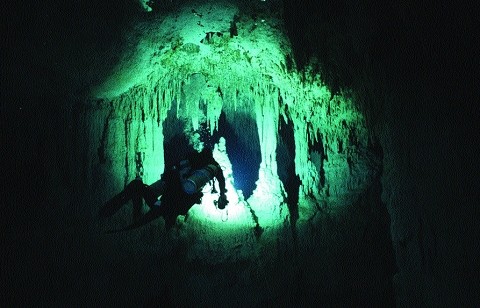 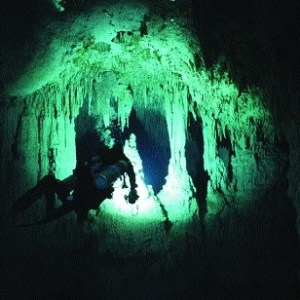 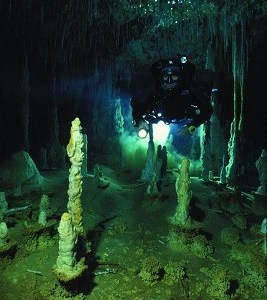 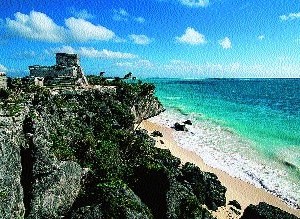 If the marine world is the least explored region of our planet, then underwater caves represent Earth’s final frontier—which begins to explain why I’m standing in the middle of a Mexican jungle gazing down at a pond the color of pea soup.

The murky green water results from an algae bloom, a seasonal event occurring in almost all warm climates. The algae covers only the surface, and when you part the weed to reveal water that is transparent, you feel like Alice stepping through the looking glass for the first time. Once you cross over, your adventure begins.

For me, the allure of underwater caves began during my explorations of the TAG—the section of the United States that encompasses Tennessee, Alabama, and Georgia—where I had climbed through dry caves. I got a kick out of the helmets and headlamps and crawling around in the muck and mire. The forms that water and limestone (along with a few of the chemicals listed on the label of your multivitamins) create is truly inspiring. Long flowing curtains that would do justice to any Tara-esque mansion, Greco-Roman columns worthy of a coliseum, minute formations as delicate and beautiful as the world under an electron microscope. They’re all found in that underground world. This fascination with these subterranean landscapes, combined with my passion for the water, prompted me to investigate their submarine counterparts.

It was this train of thought that eventually brought me to Mexico’s Yucatán Peninsula, located on the country’s Caribbean coast. In diving circles, the area is best known for two things: drift diving off the coast of Cozumel and cave geology. About five years ago, however, a new facet of diving became available to open-water recreational divers, allowing them to experience the underground world of the Mayan caves, sans the extensive training and the 300-plus pounds of equipment necessary for “real” cave diving. While self-imposed industry regulations in most regions of the world require divers to earn two certifications to become cave qualified, underwater explorers in Mexico need to be certified only as open-water divers. The reason for this is the presence of cenotes (si-NO-tays), sections of caves where the ceiling has collapsed, thereby solving the most serious problem of caving: the only-one-way-in-and-out conundrum.

The cenotes are what make the Yucatán’s caves unique. Because the caves are open to daylight, the wonders that were once hidden have been transformed into playgrounds of twisted stalactites, stalagmites, and flowstone (rock formations that seem to be oozing across the floor or walls). No matter where you look, as you slowly fin through rooms the size of cathedrals, you see otherworldly formations that beckon for closer inspection.

At around 40 feet, you may also find that a little Timothy Leary–style tripping is part of the ride. Many of the Yucatán’s caves contain haloclines—areas where saltwater and freshwater merge to produce a hallucinogenic effect. Some caves, including sinkholes such as Angelita, also have a hydrogen sulfide layer that really conjures up the 1960s. While swimming here, you will notice a blurred line below you. As you penetrate this boundary, images soften, becoming fuzzy and wavy, and those of us who actually enjoyed the ’60s want to hold right here. But even hallucinogens pale when compared to nature’s beauty, and so you push through the layers for a glimpse of more cave.

The Yucatán Caves were discovered by explorers in the diving community nearly two decades ago. Those divers continue to return, mapping caves and running lines of rope to establish new passageways. One of the most complex cave systems, Sistema Ox Bel Ha, has had 94,488 meters (almost 60 miles) of passageway mapped thus far. Along the way, three exits to the Caribbean Sea and 56 cenotes have been found, and more than six dozen caves, cenote systems, and limestone pits have been and are still being explored. Some reach 1,000 feet deep—and cave divers have reached the bottom. “The incomparable size, shallow depths, clarity, temperature (75 degrees), and spectacular formations of these caverns cannot be duplicated anywhere in the world,” says Nancy DeRosa, a former open-water diver who arrived in the Yucatán 17 years ago. DeRosa and her husband, Tony, now own Aquatech Dive Center in Akumal, one of a burgeoning number of operations that guide divers through the underground of the Mesoamerican Maya, who inhabited the Yucatán caves 3,000 years ago, before they filled with water at the close of the last ice age.

Cenote cave dives take place entirely in the cavern zone—the section of a cave where ambient light from the surface is visible—but you still need to carry a flashlight. “I’ve only done the cenote-to-cenote dives one time,” says northern Florida-based cave diver Chris Dummit. “In some, the walls were very dark; the places were foreboding, entombing almost. Then there were others that featured bright, crystalline formations that reminded me of ice castles or cathedrals.”

The Taj Mahal and Dos Ojos cenotes are among the largest, consisting of interconnected rooms, each the size of a football field, with at least one opening to the surface. At Taj Mahal, a cement path leads to the water’s edge. From there, you submerge and fin down into a huge room haunted by beams of bright sunshine that pierce three holes in the roof, through which you drift. Dive Dos Ojos, and you glide through vast rooms of towering stalagmites, razor-sharp stalactites, and “curtains” of flowstone. These breathtaking caverns perhaps represent the epitome of the Yucatán cave experience. The water is Absolut-clear, never deeper than 22 feet, yet it gives the sensation of deep diving—that pleasing two-martini-after-a-hard-day euphoria.

For a little more adventure, explore the Temple of Doom cenote, also known as Cenote Esqueleto (skeleton). The journey begins with a 10-minute walk through the jungle along a rocky path. You’ll realize why this cenote has been so named when you arrive at its edge. More than one person or animal must have fallen into the 20-foot-diameter hole in the jungle floor. (The 10-foot ladder leading out of the cenote hasn’t always been there.)

Once at the lip, you grab your mask and mouthpiece tightly, tilt your head forward, and take a step off. As soon as the bubbles from your entrance clear, you see a debris cone, a buildup of rock from the fallen ceiling, standing about 45 feet high. A white line guides you down until you reach another line strung 360 degrees around the cenote. Within the first few seconds, you realize that there’s neither enough time nor enough air to take it all in. That’s when you know you’re hooked.

For general information on the Yucatán, contact Mexico Tourism at 800.446.3942 or visit www.visitmexico.com.

Mexico’s Yucatan also offers plenty to explore above water. Composed of three states—Yucatán, Quintana Roo, and Campeche—the Yucatán Peninsula is also home to one of Mexico’s premier tourist spots, Cancún, and the Riviera Maya, a strip of eastern coastline that runs from Cancún to Tulum.

As a tourist destination, the Riviera Maya is only about five years old. Cancún has a longer history as a vacation spot, but as the demand for more and more beachfront increased, the vacation zone got pushed farther south, and, in a canny marketing move, Mexican and international developers declared the Riviera Maya to be a new beach resort.

The area—extending from Cancún through Puerto Morelos, Playa del Carmen, Xcaret, Puerto Aventura, Akumal, and Xel-Há to Tulum—is dedicated to beach tourism and nightlife. Water sports abound, including boating, waterskiing, diving, sailing, and swimming with dolphins. On land, you can travel the jungle by horseback or all-terrain vehicle. Many of these activities can be arranged through the region’s resort properties, such as the Ikal del Mar Villa Resort & Spa (888.230.7330, www.slh.com/ikaldelmar), which opened just north of Playa del Carmen in 2001; Maroma (+52.998.8728200), a serene hideaway located between Puerto Morelos and Playa del Carmen; and Ceiba del Mar Hotel & Spa (+52.998.8728060), a boutique hotel located on a white sand beach in Puerto Morelos.

As you travel south from the Cancún area, more of the real Mexico shines through. The new #307 highway makes travel up and down the “strip” safer and more comfortable. One thing you should not miss exploring is the magnificent Mayan ruins that remain throughout the Yucatán. From Tulum, at the southern end of the Riviera Maya, to Coba, which is about an hour inland, to Chichén Itzá, a World Heritage Site about two hours inland, to Uxmal, also a World Heritage Site about two hours southeast of Mérida, you will find yourself treading the same paths and passages that the ancient Maya did two millennia ago.

If the Riviera Maya represents the glitter and glamour of the Yucatán Peninsula, then Mérida, the capital of the state of Yucatán, is its heart and soul. The city, which is little known to American tourists, is a microcosm of Mexican Yucatecan life. Vendors comb the streets wearing four-foot-high stacks of handmade jipi-palm Panama hats, and bakers balance large trays of sweet pastries on their heads during the morning rush. Mérida is a bustling place, where Mayan men and women make the sign of the cross on their lips with their thumbs as they hustle down 2,000-year-old streets past four-century-old cathedrals on their way to work. It is a metropolis of narrow sidewalks and wide European boulevards, of artisans and outdoor cafés, of military pomp and circumstance, and of street musicians and magicians. It is a city of baking hot sun, and tree-shaded, breezy squares. But most of all, it is a city of proudly independent Maya people, who have the only premodern culture in the Americas with a written history.

Side trips easily taken from Mérida include the beach resort of Progreso and its three-mile pier; the Chicxulub (CHICK-chee-loob) crater, site of a meteor strike that some scientists believe ended the age of the dinosaurs; Celestun, an ecological preserve home to thousands of flamingos; and La Ciudad Amarilla (the Yellow City), more commonly known as Izamal, where three cultures—Mexican, Spanish, and Maya—coexist.