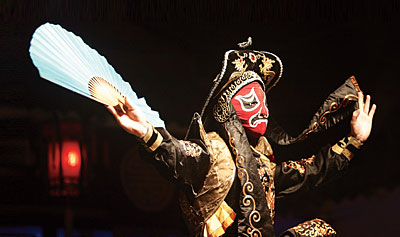 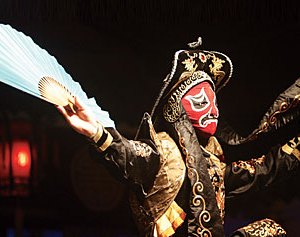 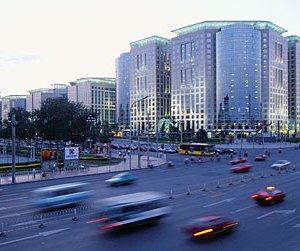 As if by magic, an actor’s mask changes from the face of a red, gold, and white tiger into the battle-ready visage of a painted warrior. The illusion—part of a performance by the Peking Opera to mark the opening of Beijing’s newest luxury hotel—is one of roughly 25 instantaneous transformations that the actor completes during a 10-minute routine. Known as Changing Faces, the 200-year-old art form is taught from generation to generation through the male line. Tonight, however, the performer is a woman, a product of China’s one-child policy. With no males to continue the family legacy, her father parted with tradition and taught his daughter the secrets of his trade.

The business leaders and government officials in attendance at the Changing Faces ceremony have differing opinions on the woman’s technique. Most agree, however, that her role is indicative of changing times in China—and symbolic of Beijing’s rapid push toward modernization. In anticipation of the 2008 Summer Olympics, this ancient city of nearly 20 million residents is hurtling toward the future with a $25 billion face-lift that is altering nearly every block in town.

Beijing’s building boom started when China opened its economy to capitalist reforms in the early 1980s. But the pace of demolition and construction accelerated appreciably in 2001, when the International Olympic Committee accepted the city’s bid to host the Games. Today, gleaming glass-and-chrome structures rise from lots where small factories and modest homes once stood, and—in a city where bicycles once served as the primary means of transport—late-model Audis and BMWs sit gridlocked on new roads and expressways.

The number and scale of construction projects in Beijing have attracted many of the world’s leading architects to the city. Dutchman Rem Koolhaas is designing intersecting Z-shaped towers to house China’s state television station; Iraq-born Zaha Hadid is building a 10-million-square-foot residential and office complex; Englishman Norman Foster is reconfiguring the airport into the shape of a dragon; and German Albert Speer Jr. has been commissioned to design a railroad station and a north-south transportation axis to connect the Olympic Village to Tiananmen Square. Flocking here, too, are hoteliers. At least 30 new hotels are in development in Beijing, which, officials predict, will receive 4.4 million foreign visitors in 2008.

Beijing’s frenetic growth has not come without controversy. Entire neighborhoods, some dating as far back as the 13th century, have been bulldozed to make way for modern buildings. Exacerbating the situation is the Chinese government’s eminent domain policy, which provides residents who are displaced from their homes only small fees for their properties. The standard fee is not nearly enough to buy a home in Beijing proper, so most evicted residents move to the outskirts of town. “It’s a little sad,” says a spike-haired, 31-year-old limo driver who is too young to remember the hardships of Mao Zedong’s rule. “As old buildings are torn down, so is the culture.”

Only one-third of the dynastic buildings that once existed throughout Beijing are still standing. However, the government has set aside 18 neighborhoods for preservation, and the city’s 700-year-old layout remains intact: Broad, straight boulevards run on a north-south axis in Beijing’s center, crossed by smaller east-west streets.

The boulevards—thoroughfares that were designed to accommodate nine horsemen galloping side-by-side in the event of an uprising—date to the 13th-century reign of Kublai Khan, grandson of Genghis Khan and first emperor of the Yuan dynasty. Kublai’s palace compound, which he built in the center of the city, consisted of artificial lakes and a collection of structures that faced south for maximum exposure to the sun. (Emperor Yonglo rebuilt the 9,999-room imperial complex, or Forbidden City, in 1417, after the Ming dynasty drove the Mongols out of China.) Centuries later, the placement and orientation of buildings remain priorities in Chinese culture, as evidenced by Beijing’s new Olympic Village.

Set in the northern section of the city (Chinese emperors sat in the northernmost section of the palace so that their subjects faced them from the south), the Village is close to lakes and mountains, both of which are important elements in the Chinese art of feng shui. When completed—Beijing officials hope to have the Village built by the end of 2007—it will encompass about 60 training sites and 37 stadia, including the more than 90,000-seat Bird’s Nest. Made from interwoven steel beams reminiscent of twigs, the bowl will feature a removable roof powered by solar panels. Alongside the stadium will be the equally conspicuous Water Cube, a swimming center made of durable plastic and designed to be the world’s largest aquatic facility.

To accommodate the throngs of tourists expected during—and after—the Olympics, several international hotel chains are opening new properties in Beijing. The performance by the Peking Opera was the main event at the grand-opening celebration of the Raffles Beijing Hotel. The Beaux Arts–style property, under different names and owners, has been a fixture since the twilight years of the Qing dynasty at the turn of the 20th century, when Peking (the former term for Beijing) was one of the world’s most exotic and alluring destinations. Foreigners took steamships from Hong Kong and Singapore to the city, where camels strolled the streets and imperial gardens bordered magnificent palaces. Among the pastimes in the French-owned Grand Hotel de Peking, as Raffles was then known, were afternoon tea in the lobby and dancing on the rooftop terrace that overlooks the Forbidden City.

During World War II, the hotel housed Japanese military personnel and, later, American troops. After Mao Zedong marched onto the steps of Tiananmen Gate in 1949 and proclaimed the formation of the People’s Republic of China, he celebrated at what is now Raffles but then was known as the Beijing Hotel.

Raffles, which is owned by the Beijing Tourism Group, opened in the oldest of the Grand Hotel buildings in December 2006, after Raffles Hotels & Resorts renovated the property and restored its Franco-Asian accents. French chandeliers illuminate a formal French restaurant, and displays of memorabilia—photographs, mementos, books—serve as reminders of the hotel’s century-long history.

By contrast, Beijing’s Ritz-Carlton, which opened in October 2006 in the heart of the city’s newly constructed financial district, stands as a tribute to China’s modern economic boom. UBS, JP Morgan, and Goldman Sachs all neighbor this 21st-century hotel, as does a verdant patch of land called, in a nod to Manhattan, Central Park. The hotel features contemporary decor that is softened by such touches as a piped-in ginger-lily essence that perfumes the lobby. The high-ceilinged space, bathed in natural light and decorated with trees that grow through the white marble floor, is a modern take on a traditional Chinese courtyard.

Also new in Beijing are a Regent hotel and the 142-room Valley Wing tower at the 20-year-old Shangri-La. A second Ritz-Carlton and a Four Seasons hotel are scheduled to open, respectively, in late 2007 and early 2008. (The Four Seasons will be located off Beijing’s Third Ring Road, directly across the street from a U.S. Embassy complex that also will open in 2008.) The city’s 23-year-old St. Regis hotel is closing in November for a four-month overhaul, and the Peninsula, the Grand Hyatt, and Shangri-La’s China World Hotel all have completed renovations.

In response to the upgrades in Beijing and elsewhere throughout the country, the China National Tourism Administration has introduced a new rating system to distinguish ultra-luxury hotels from the more standard luxury properties. For its new Platinum Five-Star billing, the organization has designated only four hotels in the country, one of which is Beijing’s China World. (Because the rating process takes a year to complete, it initially excluded several of the newer hotels.)

In the past, Chinese hotel ratings—and the hotels themselves—have been somewhat inconsistent. And although China has embraced the English language (as billboards throughout Beijing attest), language difficulties are the norm even in the finest hotels. Furthermore, despite the best intentions, service often can be overeager by Western standards. However, the enthusiasm of Beijing’s residents is precisely what pushed the city to a successful Olympic bid.

When Beijing lost the 2000 Olympic Games bid to Sydney, Australia, in 1993, disappointment ran high. Many in the city blamed international bias, while most of the rest of the world linked the decision to the Chinese government’s killing of several hundred citizens during a student demonstration in Tiananmen Square in 1989. Regardless, when Olympic inspectors returned to Beijing in early 2001, the city’s residents were intent on securing a different outcome.

To prepare for the Olympic Committee, Beijing officials had flags hoisted throughout the city, streets cleaned, hedges trimmed, and brown grass spray-painted emerald green. Beijing’s citizens helped clinch the bid when more than 10,000 of them joined a bike rally designed to convince Olympic inspectors to award their city the Games.

Now that the 2008 Games are fast approaching, Beijing is poised to deliver on several of the promises it made. The city pledged to host an Olympiad that was not only technologically advanced, but also environmentally friendly. Today, gardeners are working alongside construction crews, planting 80 percent of the 2,500-acre Olympic Village with cypress, weeping willow, and pine trees. Industrial furnaces at Beijing factories are being converted to cleaner-burning fuels, and polluting companies are relocating outside of the city. Beijing hopes to have a new natural gas pipeline and water-recycling program in place by the time the Olympics begin, and buildings at the Olympic Village, such as the Bird’s Nest, will utilize solar power.

During the Games, government officials plan to restrict the use of motor vehicles and to cease all construction work in the city. The hiatus, however, will not last long: After the Olympics, Beijing’s face-lift will resume with the completion of an 80-story tower—the city’s tallest building—that will house a Shangri-La hotel on the top floors.