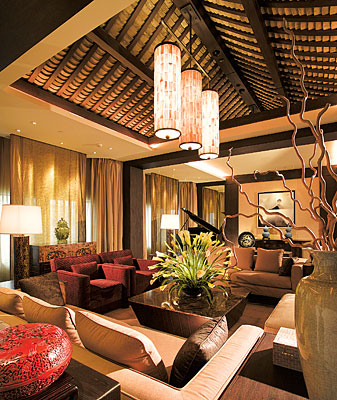 By the time the torch ceremony commences the XXIX Olympiad in August 2008, China’s capital will be home to several upscale hotels. Following are our picks for the 10 most promising places to stay during the Games.

Located in the heart of Beijing’s new $5.6 billion, Wall Street–inspired financial district, the Ritz-Carlton overlooks bank buildings, a restaurant row, and the city’s verdant Central Park. The 253-room hotel, which opened in October 2006, offers an airy refuge bathed throughout in natural light and scented with piped-in essence of ginger lily. ($540–$5,500)

Opened in 1990, this Shangri-La property underwent a $30 million renovation in 2003 and is now one of only four hotels in the country that have been awarded the Chinese government’s new Platinum Five-Star rating. The capacious marble lobby—where guests can enjoy cocktails, tea, and even live Italian opera performances—is the 716-room hotel’s main attraction. Other features include six restaurants, an indoor swimming pool, tennis courts, and direct access to the adjoining China World Plaza shopping center. ($350–$4,000) www.shangri-la.com

The Four Seasons is scheduled to open in early 2008 on Beijing’s Third Ring Road, directly across the street from the new U.S. Embassy (also scheduled to open in 2008) in the city’s fashionable Chao Yang District. Plans call for 330 guest rooms and suites, three restaurants, a lobby lounge, and an entire floor devoted to a spa and health club. (about $400–$9,000) www.fourseasons.com

Located within the Oriental Plaza shopping center, the 825-room Grand Hyatt opened in 2001. Last year, the hotel added two new Diplomatic Suites with Forbidden City views, but the highlight of this contemporary hotel is its resort-style indoor swimming pool, which includes a waterfall and connects to the fitness center. ($260–$6,000) www.grand.hyatt.com

This newly renovated hotel’s setting—adjacent to the Forbidden City and Tiananmen Square—is unparalleled. The hotel’s decor and amenities offer a taste of pre-Communist Beijing, with Franco-Chinoiserie accents, traditional afternoon tea, and the Writers Bar, where guests can enjoy cocktails and cigars in a library-like atmosphere. Dining options at the 171-room property, which is adjacent to a shopping plaza and spa, include the celebrated French restaurant Jaan. ($450–$10,300) www.raffles.com

Formerly the Palace Hotel Beijing, this property became part of Peninsula Hotels in 1992 and underwent a four-year, $34 million renovation in 2001. The 525-room hotel includes two restaurants, a pool and fitness center, and an arcade with more than 50 shops. For now, limited spa services are available in one of two treatment rooms, but the hotel plans to open a full-service facility by 2008. ($350–$5,300) www.peninsula.com

Opened in February, this centrally located hotel consists of 500 guest rooms (including 57 suites), four restaurants, a 10-room spa, a business center, and a fitness center with an indoor pool. The Regent Club Lounge, located on the establishment’s top three floors, overlooks the Forbidden City. ($260–$3,100) www.regenthotels.com

Ritz-Carlton’s second hotel in Beijing is scheduled to open in August. The 320-room property will be located within a business center near China World Plaza and will include a lobby lounge for afternoon tea and evening cocktails. A dedicated top floor will house a spa, a fitness center, an indoor pool, and sundecks. The hotel also will have a wedding chapel, which Ritz-Carlton claims will be the only one in China. ($580–$5,800)www.ritzcarlton.com

The new Valley Wing connects to the original 528-room Shangri-La, which was built off the Third Ring Road in the north of the city in the late 1980s. Opened in March 2007, the Valley Wing tower has 142 rooms including a presidential suite. Also new is the Blu Lobster restaurant and bar, which has one of the largest Bordeaux collections in Beijing. Other highlights include a rooftop garden, a running track, a heated indoor swimming pool, and a spa with 11 treatment suites. ($370–$4,000) www.shangri-la.com

Located in the embassy district near the Silk Market, this 258-room property will close for renovations in November 2007. When it reopens in March 2008, the hotel will feature larger rooms, additional suites, updated public areas, and a new wine lounge. Until that time, guests can enjoy the hotel’s 12 restaurants and bars, and one of Beijing’s most impressive spa, swimming, and sport facilities. A favorite among golfers is the rooftop putting range. ($460–$6,450) www.starwoodhotels.com