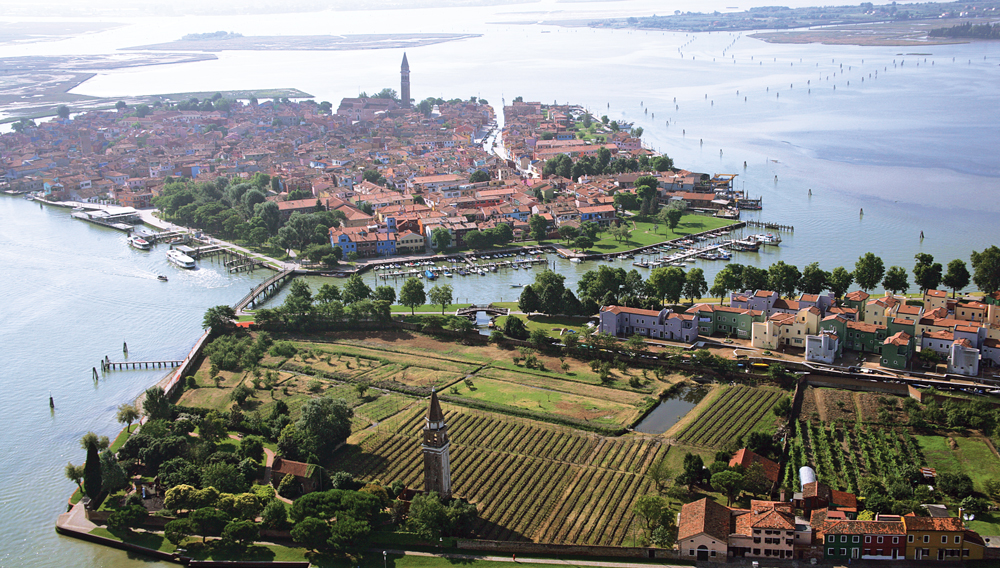 A new generation of chefs and winemakers is transforming the Venice Lagoon.

On any given day, the musicians in the dueling café orchestras on Venice’s Piazza San Marco saw away at violins and pound on grand pianos, attempting to lure passersby to the tables with their strident siren calls. The atmosphere is manic, the crowds dense. The plaza bristles with selfie sticks, and plates are piled with too much of the tourist fare Venetians call plastica. A quick water-taxi ride over the Venice Lagoon, however, provides instant relief. By dusk, a hush falls upon the canals of these backwater islands, and the air is perfumed with the seductive smell of pesto, fritto misto, and olive oil.

This Venetian parallel universe is increasingly the best reason to visit the city, especially for hungry travelers. While Venice is often dismissed as the Italian city that fine food forgot—an oversized concession stand serving watery Bellinis, dead-eyed fish, and gummy pasta—the lagoon is earning quite the opposite reputation. Over the past five years, the spray of islands surrounding the city has become home to creative regional kitchens, small vineyards with serious winemakers, and a gleaming new cooking school. There, a generation of ambitious chefs is intent on salvaging classic Venetian cuisine—with its delicate seafood, risottos, artichokes, and creamy tiramisu—and elevating regional ingredients.

When I arrived on a golden spring day, I first made my way to the island of Giudecca, located 5 minutes south of Piazza San Marco by shuttle boat. Here, Hotel Cipriani, now a Belmond property, has remained a bastion of la dolce vita since its opening in 1958, and the 2014 debut of Oro Restaurant—part of the hotel’s recent renovation—has reestablished this landmark as an essential destination for gourmands. The dining room now gleams with Rubelli fabrics and Murano chandeliers, and executive chef Davide Bisetto, who earned two Michelin stars at the Casadelmar hotel in Corsica, oversees the kitchen. Bisetto has revived some of the restaurant’s original dishes, including its signature beef carpaccio, but his menu mostly surprises. As night fell over the jumbled rooftops of the palazzi visible through the dining room’s picture windows, I tucked into a plate of button-size ravioli stuffed with crab, each perfect pillow popping in my mouth. The foie gras was marinated in the pungent anchovy oil called colatura and served with Bronte pistachios, local artichokes, and burrata. The meal finished with a blackberry soufflé that seemed like it could not get any better—that is, until the waiter spooned hazelnut gelato onto the top, and I watched it sink down into the airy confection.

Cipriani, though lately refreshed, represents the lagoon’s old guard, but the JW Marriott Venice—located a few islands farther south—is the newest of the newcomers. This establishment opened in March on Isola delle Rose, a 40-acre private island that looks much like a floating park. In contrast to so many other venues in Venice, which exude an opulent, old-world style, the Marriott favors a less formal, 21st-century style characterized by spacious guest rooms outfitted with simple white linens. The city’s first fully equipped urban resort, the complex includes the largest spa in town, a rooftop infinity pool, and a landscaped garden. But this hotel’s focus on food remains its most attractive feature. The on-site Sapori Cooking Academy, for example, is anchored by a stainless-steel kitchen divided into six stations and designed for marathon 6-hour cooking classes. In preparation for these sessions, hotel chefs lead participants on a tour of the famed Rialto markets to pick up fresh ingredients, then to a bar for a fortification of snacks, before returning to the kitchen to prepare such Venetian classics as pasta with clams and mussels. The hotel also offers four restaurants, the most formal of which is Dopolavoro.

Even Sagra, the more casual rooftop trattoria overlooking Venice, has an ambitious kitchen. Though the dining room, which is decorated with Panama hats and straw market baskets, gives diners the impression that they are about to enjoy a seaside picnic, the cuisine is serious. “Eighty percent of the seafood, meat, and produce I use comes from the area around Venice,” said executive chef Mauro Taufer, as I took my seat. “Then I revisit Italian cuisine from every region of the country, from north to south, taking inspiration from each area.” His signature dish may be the lagoon sea bream cooked with cherry tomatoes, artichokes, and olives, but the organic kamut spaghetti dressed with an understated clam sauce that I ordered was just as good—as were the sweet grilled langoustines splayed over a bed of green beans.

Beyond the Cipriani and the JW Marriott lies the newly renovated St. Regis Venice San Clemente Palace, a historic hotel with a trio of new restaurants that reopened this year after a $28 million remodeling. Not wishing to spend the duration of my visit on the south side of the lagoon, however, I ventured next to the islands in the northern region, where small, independent restaurants are producing the city’s most unexpected gastronomic revelations.

The northern bounty begins on Sant’ Erasmo, a pastoral island often referred to as Venice’s garden, where Michel Thoulouze hosts wine tastings at Orto di Venezia, a winery situated in a restored 18th-century waterfront farmhouse. The star in Thoulouze’s oenological portfolio is Orto di Venezia, a white wine he makes from Malvasia Istriana and Vermentino grapes harvested from his surrounding 4.5-acre vineyard. “It was an accident,” he said laughingly of his winemaking effort. “I was living in Paris but moved here 10 years ago after I saw this view and felt the quiet. And when I analyzed the soil, I saw its potential. My wine has its own personality; the lagoon wind salts the vines, so it has a singular acidity. People like it because it has its own unique spirit.”

A similarly fresh excitement can be felt at Venissa winery and restaurant, which has transformed the nearby island of Mazzorbo into a bustling destination for food lovers. Venissa is housed in a renovated 13th-century monastery at the end of a waterside row of sherbet-colored buildings. The monastery’s kitchen garden and walled vineyard are once again being put to good use. In fact, the vineyard managers revived the cultivation of a 600-year-old grape favored by the Venetian doges, Dorona—a varietal that virtually disappeared after a 1966 flood destroyed all but 80 vines.

This fruity white wine perfectly complements the bar snacks served in Venissa’s osteria, but the sleek dining room within the monastery courtyard remains the primary draw. When the original chef, who won Venissa its first Michelin star, decamped in 2013 for her own kitchen, the restaurant moved in a remarkable new direction. “Since the restaurant already had a strong heritage, I thought, why not experiment?” said Matteo Bisol, the general director. “Why not put four talented people together and let them work as a team? So we invited four young chefs, all but one in their 20s, from four different Michelin-starred restaurants to cook in the kitchen. One is responsible for starters, one for the first course, one the main course, and one dessert.”

Still, my most surprising dinner in the lagoon was served on Murano—the one island that draws crowds on a par with Piazza San Marco. After quitting her job as an event planner at Harry’s Bar, Giovanna Arcangeli turned her attention to her native island and transformed a canal-side bakery into a restaurant. “It was 400 years old and falling down,” recalled the entrepreneur, who enlisted architect Catarina Nason to salvage the building. Nason, also a Murano native, decided during this project to effect a change of career as well and ended up taking charge of the kitchen. Their small eatery, Acquastanca Osteria, opened in 2012 to instant acclaim.

“I try to stick to local lagoon ingredients as much as possible,” Nason told me, as I sat down at one of the rustic wood tables under the osteria’s beamed ceiling. “The baby artichokes, shrimp and squid, softshell crabs.” Nason distills the purest flavors from her bulging larder. Her risotto was cooked in a broth made from go, the tiny lagoon fish, and lush with clams. Her squid-ink pasta was delicate and black as licorice, while the salad of octopus and shrimp, lightly tossed with olive oil and lemon, preserved the fresh flavors of the seafood.

“Cooking is in our DNA; it’s our passion,” said Arcangeli of Acqua­stanca Osteria’s elegantly austere cuisine. “Our goal someday is to have people remember Murano—and the lagoon—as much for the food as the scenery and the shopping.”

Gazing out at the sun gradually sinking behind the canal, I reflected that Arcangeli need not worry: Her goal had already been achieved.