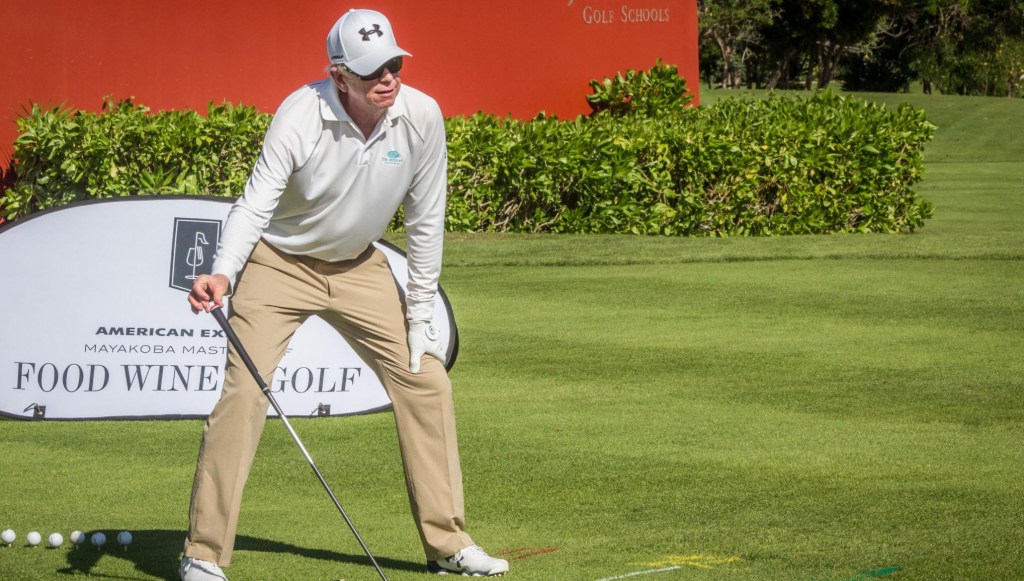 The Riviera Maya transformed into a golf and culinary mecca at the first-annual American Express Mayakoba Masters of Food, Wine & Golf, which included culinary stars and guests from around the world celebrating the best of sport, spirits and gastronomy from June 2-5, 2016. As part of the four-day extravaganza, over 300 guests partook in eclectic dining, tasting and spa experiences throughout the resort and 136 participants played in a two-day golf tournament on the Greg Norman-designed El Camaleon golf course, home to the only PGA TOUR event in Mexico: The OHL Classic at Mayakoba.

The weekend’s festivities raised money for acclaimed Mexican former professional golfer Lorena Ochoa’s foundation, which helps underprivileged children reach a balanced life through educational programs, sports, healthy living, and self-esteem seminars. The online chapter of the auction will continue to run through June in an effort to raise additional funds.

Sponsors of this year’s event included American Express, Aeromexico, and Delta as the official airline partners along with other distinguished brands such as Tequila Patrón, Vueve Clicquot, Vinoteca, Heineken, Beringer, Casa Noble Tequila, among others.

“We are thrilled that the most anticipated event of the season was a success and attracted the best in culinary talent and golf,” said Carl Emberson, VP of Operations and Marketing for Mayakoba. “We look forward to welcoming the American Express Mayakoba Masters of Food, Wine & Golf next year and delivering another weekend of exquisite cuisine, wonderful wines, camaraderie and championship golf.”

The festivities kicked off with a special clinic by master golf instructor, Jim McLean, on the El Camaleon golf course. A spirited opening party presented by Aeromexico and Delta Airlines followed the clinic at Rosewood Mayakoba’s outdoor Palapa, with guests dressed in the airline’s signature blue. An inspiring four-course menu featured delectable meals from an array of guest chefs, winemakers, sommeliers, tequila masters and artisanal brewers including an exquisite duck breast topped with yucca puree with yellow aji, and paired with green beans and radish sprouts from Felipe Donnelly, executive chef and owner of Cόmodo in New York City.

“We are very proud to be a part of an event as wonderful and unique as the American Express Mayakoba Masters of Food, Wine & Golf,” said José María Zas, President and CEO of American Express Mexico, Latin America, Brazil and the Caribbean and International Insurance Business. “The four-day event was an unforgettable experience for the guests and showcased the best in gastronomy, fine drinking, and golf.”

The Masters of Mayakoba Grand Tasting was hosted at Fairmont and featured wines from around the world including Beringer, Adobe Guadalupe, and Santos Brujos.

Golfers teed off on Friday and Saturday for The Mayakoba Golf Cup, sponsored by Tequila Patron, with a two-man scramble format the first day and best ball on day two. Live food and beverage stations fueled the athletes on the course throughout both days. On Saturday, players and guests gathered at Koba restaurant at El Camaleon Clubhouse for an awards ceremony, toasting to the winners with cocktails by Tequila Patron and enjoying an emblematic seafood lunch from acclaimed chef, Andrew Ormsby.

During the two-day tournament, a one-of-a-kind prize of a stay at Fairmont Heritage Place, an exclusive residential community offering fractional ownership, was rewarded to golfers scoring a hole-in-one at hole 10 during the Mayakoba Cup.

Evening festivities continued throughout the night with a closing dinner and party presented by Gourmet Awards by Travel & Leisure Mexico. Guests met and interacted with the weekend’s celebrity chefs under the stars at Banyan Tree Mayakoba’s Sands Beach Club and MK Blue while enjoying small plates such as grilled strip loins with criolla tomato, onions, cilantro and lime cooked up by Chef David Andrews; Chef Fernando Trocca’s beef empanadas with tomato mojito; savory desserts, craft cocktails and wine. Mayan warriors adorned in traditional garments with colorful ornamentation performed a sundown ritual and the night concluded with fireworks illuminating the sky over the ocean.

Located in the Riviera Maya just 15 minutes from Playa del Carmen, Mayakoba is an eco-friendly resort development on the shores of the Caribbean in Mexico. Surrounded by natural beauty in its lagoons, pools and sugar sand beaches, Mayakoba is home to four luxury hotels – Fairmont Mayakoba, Rosewood Mayakoba, Banyan Tree Mayakoba and Andaz Mayakoba (opening Fall 2016). The resort also offers a spectacular 18-hole course designed by renowned architect and PGA legend Greg Norman. The signature course is home to the OHL Classic at Mayakoba – the only PGA TOUR event in Mexico. Six miles of freshwater lagoons and lead to a white sand beaches with turquoise waters on the Caribbean Sea and connect all of the hotels. Mayakoba is an eco-conscious development and has implemented significant practices to encourage sustainability. For more information, please visit www.mayakoba.com