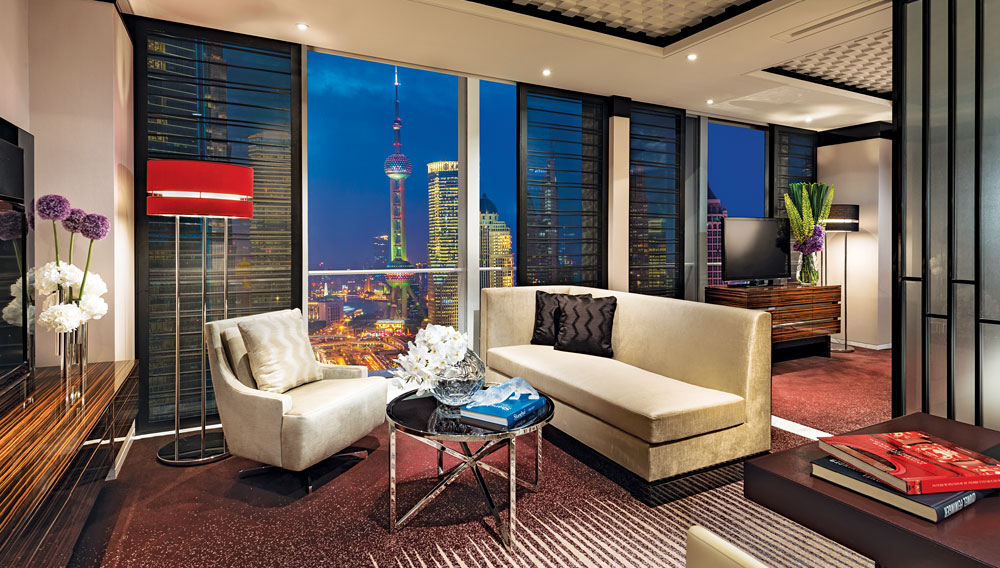 The new Four Seasons Hotel Pudong, Shanghai, is intimate by modern Chinese standards, with 187 guest rooms and a restaurant, Shàng-Xí, with five private dining areas. But the hotel’s spaces—including 15 suites, the Executive Club Lounge, and an indoor infinity pool—are expansive and soaring, appearing even more so thanks to sweeping panoramas that take in the greatest hits of the Shanghai skyline.

The Pudong property, Four Seasons’ second hotel in Shang­hai, opened in September among the crowd of buildings surrounding the financial district’s iconic Oriental Pearl Radio & TV Tower. Set in the new 21st Century Tower, the hotel features interiors by the Dallas-based Wilson Associates, with polished marble surfaces setting off the curves, chrome, and muted tones in the Art Deco–inspired furnishings. Floor-to-ceiling windows in the rooms highlight views across the Huangpu River to Old Shanghai.

The Four Seasons’ city-view infinity pool is set within Flare spa, which includes six treatment rooms and is adjacent to the hotel’s fitness center. In addition to Chinese cuisine at Shàng-Xí, the Four Seasons offers international fare at Camelia, where executive chef Weimar Gomez, a veteran of Four Seasons Hotel George V in Paris, masterfully prepares such delicacies as roasted black cod resting on a bed of tangy mango chutney.