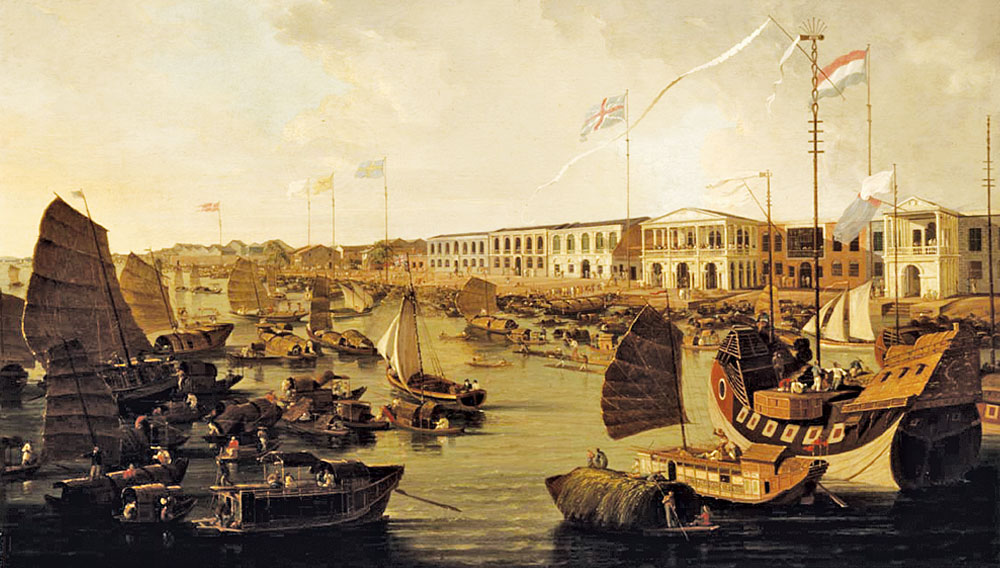 Exotic travel of the type highlighted in this month’s special issue is not always the reward for financial success; sometimes it furnishes the source of one’s wealth. This thought may have occurred to Mrs. Warren Delano II on October 31, 1862, as she and her seven children approached the harbor of Hong Kong aboard Surprise, the vessel her husband had chartered to transport his family from New York to this remote trading post. Despite rough weather, the voyage had been a delight to her young daughter Sara, who, decades later, never tired of recounting the details to her son, Franklin, and his children. Sara Delano Roosevelt recalled that her father, dressed in white linen, met their ship in a boat rowed by Chinese oarsmen in crisp white uniforms. Yet the celebratory mood of this reunion did not prevent Sara’s mother from striking a somber note in her journal entry for that day: “I feel oddly again to be a fanqui [sic],” she wrote.

Catherine Delano learned the phrase fan kuei (foreign devil) 20 years earlier, when she joined her husband in China as a new bride. The xenophobic Chinese applied the term to all the merchants that crowded Canton’s foreign concession, where agents from Western countries could legally trade. In the walled barracks, Warren Delano had earned a fortune as head of Russell & Company, one of the most important American firms engaged in what had been known since the 18th century as the China Trade. Though the British dominated this enterprise, old New England families such as the Delanos, Derbys, and Perkinses carved out substantial niches for themselves, and their ships carried into the harbors of Boston and Salem not only priceless tea and silk but also the romance of distant lands.

Accounts of such expeditions seldom mentioned that these descendants of Puritans acquired much of their wealth—and their diabolical sobriquet—by trafficking in opium, which the Chinese government banned in 1729. This embargo, however, merely enhanced the drug’s appeal, and the British East India Company capitalized on the situation by exporting massive quantities of the invidious commodity from India, Britain’s recent imperial acquisition. Americans made due, at first, trading furs and skins, until they discovered ready opium sources in Turkey. By the late 1830s, when Delano succeeded Robert Bennet Forbes as head of Russell & Company, that firm was the third largest purveyor of the narcotic in China. With the outbreak in 1839 of the first Opium War—a three-year conflict between Britain and the Qing dynasty over trading rights, during which British merchants withdrew from Canton—Delano’s pecuniary opportunities exploded: That year alone, he sold 8,000 chests of opium.

When Delano and his wife returned to America in 1846, the wealth he amassed during his extended sojourn in China enabled him to enjoy a lifestyle suitable to the merchant prince he had become. He purchased a five-story townhome in New York City next to John Jacob Astor’s, as well as a country seat on the Hudson River, and for the next decade he enjoyed the role of patrician patriarch. The acumen that served him in the drug trade, however, deserted him on Wall Street. In 1857, the failure of the Ohio Life Insurance and Trust Company caused the market to collapse and, with it, the railroads and coal mines in which he was heavily invested. At the age of 50, Delano, teetering on the brink of bankruptcy, was compelled to return to the Far East—and the business he knew best.

The American Civil War broke out the year before he brought his wife and children to Hong Kong, and some members of the Delano family, nearly a century later, attempted to justify his dubious dealings by suggesting that he had returned to Asia to supply opium to the Union Army for medicinal purposes. When Sara’s son became the 32nd president of the United States, much was made in the press of the Delano “riches derived from the degradation and wretchedness of the Chinese people,” as one columnist phrased it. The president, though boastful of his family’s maritime heritage and connection to China, remained silent on the subject of his grandfather’s career as a foreign devil. Only Eleanor Roosevelt, ever the conscience of the clan, acknowledged the fact in 1953, guardedly remarking that “the Delanos and the Forbeses, like everybody else, had to include a limited amount of opium in their cargoes to do any trading at all.”