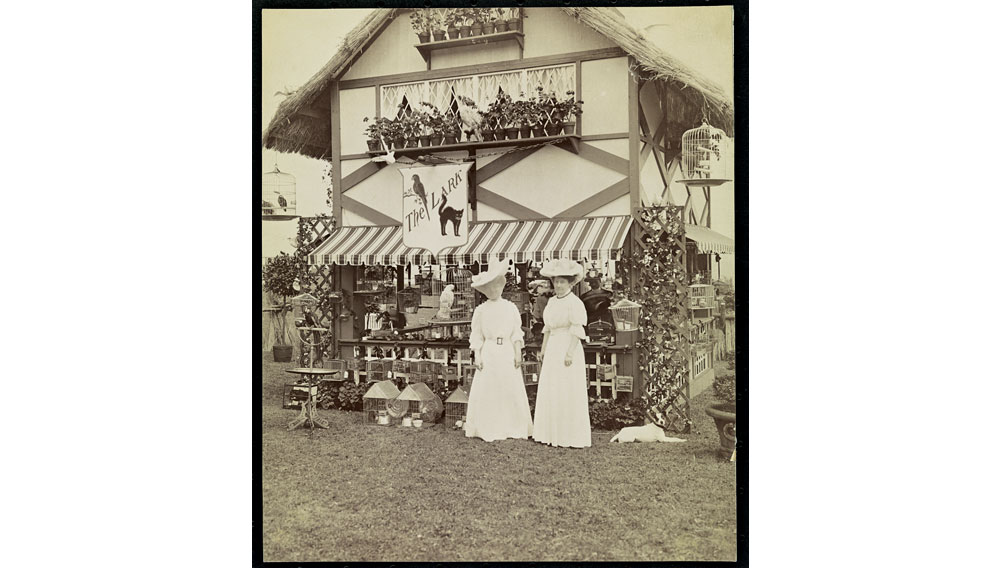 If the gentlemen of Gilded Age Newport had as their toys of summer splendid yachts, the latest motorcars, and stables of Thoroughbreds, then their coddled wives had their court jesters—single young men with no occupation other than to relieve these pampered matrons’ ennui during the brief interludes between fêtes champêtres, teas, and balls. Of these ambitious youths, none achieved greater material success in his chosen profession—or caused greater mischief—than Henry Symes Lehr.

Born the son of a ruined Baltimore tobacco merchant in 1869, Lehr, deprived of life’s finer things, took a job as a bank clerk and, to counteract the “grayness, and squalor” of his circumstances, realized the “beauty, light, [and] music” he craved by performing in amateur theatricals, in which he frequently and convincingly adopted female attire. Through these thespian antics, which prepared him for society’s stage, he made the acquaintance of Mrs. Evelyn Townsend Burden, who invited him to her Newport “cottage.”

“Most human beings are fools,” Lehr observed. “They will overlook anything so long as you amuse them.” He proved his point when he encountered a diamond-draped Mrs. William Backhouse Astor Jr. at a Newport ball. “You look like a walking chandelier,” he told her, swiping a bunch of red roses from a vase. “Put them on. You need color!” The usually humorless matriarch, disarmed by his effrontery, burst into laughter.

This grande dame, with the other members of Newport’s steering committee—Mrs. O.H.P. Belmont, Mrs. Hermann Oelrichs, and Mrs. Stuyvesant Fish—raised the social curtain on their quick-witted protégé, who threw himself into his comic role. “[Lehr] simply laughed himself into the bosom of the ultra exclusives,” wrote Newport’s Morning Telegraph. “He has robbed [the town] of invitations to dinners, musicales, yacht cruises, barn dances, and heaven knows what not.”

Lehr’s hosts, however, were not his only victims. He still needed money—or, rather, a wife who possessed it. Fortunately for him, in the spring of 1901, his benefactresses introduced him to Elizabeth Drexel Dahlgren, heiress to a banking fortune; unfortunately for her, this naive widow delighted in his company. She agreed not only to marry him but also to settle on him the then-generous sum of $25,000 a year. But the longed-for wedding night came as a blow to the bride: “Do not come near me except when we are in public,” he coldly told her, “or you will force me to repeat to you the brutal truth that you are actually repulsive to me.” Determined not to disgrace her family, she wrote in her diary, “My happiness is gone.”

But for Lehr, the games began. Of the great ladies he had cultivated, Mamie Fish (pictured, right) was his kindred spirit. Though she had married into the highest echelons of Knickerbocker society, Fish shared with him a sharp tongue and a merciless disdain of others’ gullibility. When Lehr maliciously speculated that her favorite flower was a climbing rose, she replied that his was the “mari-gold.” The two reveled in playing pranks. At the New­port Casino, they coated a dog in flour and set it on a group of ladies dressed in black lace. During a dinner party, they dressed servant boys as cats and had them drop white mice in the ladies’ laps. At Fish’s reception for Prince del Drago, guests were greeted by a chimpanzee in formal attire rather than by the Roman nobleman, while at her ball for a Roma­nov grand duke, she announced at the last minute that the Czar of Russia would attend instead, leaving the fawning onlookers to bow and curtsy to an elaborately costumed Lehr.

These uproarious summers always ended with Fish’s Harvest Festival Ball, but this extravagant era came to a close with the demise of Lehr’s ladies. Mrs. Astor died in 1908; Mamie Fish in 1915; and Tessie Oelrichs in 1926. Mrs. Belmont, who gave up social pursuits to promote the cause of women’s suffrage, survived them all, including the middle-aged Lehr, who—no longer the golden boy of summer—died in Baltimore of a brain tumor at the age of 59. His final joke was on his wife, to whom he bequeathed his “houses, bonds . . . carriages, yachts, motorcars”—and, of course, his unpaid debts, the most significant being one of gratitude.

Corrections: Chris Lewis should have been credited for photographs included in an article in Robb Report’s May issue (“High Seas,” page 122). * The range of the Bombardier Global 5000 jet, which appeared in the June issue (“Business Aircraft,” page 318), is 5,984 miles.