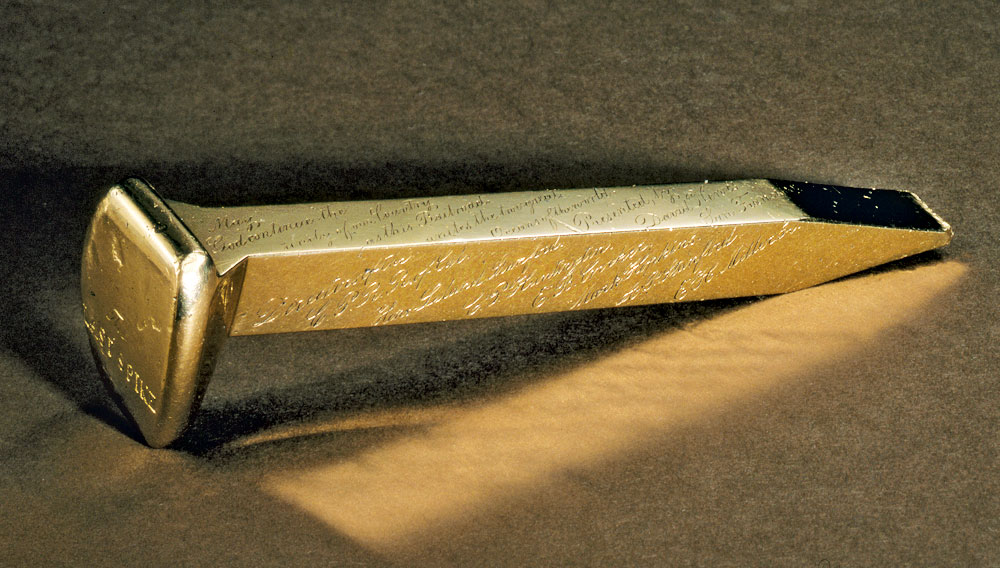 In 1848, when James Marshall discovered gold in California, travelers from the East Coast to San Francisco were essaying a perilous and prolonged undertaking. These pioneers were condemned to choose between the hazards of crossing the continent’s hostile wilderness by stagecoach and the dangers of traversing the fever-infested jungles of the Isthmus of Panama—a journey of nearly 5,500 miles. Those who survived the trek contributed to the burgeoning population of the 31st state, and as the region’s economic advantages became increasingly apparent to assaying eyes in Washington, D.C., legislators and lobbyists began to speak seriously of bridging the coasts by rail. The outbreak of the Civil War added urgency to this ambition, and in 1862, Congress passed the first of two Pacific Railroad Acts—measures that garnered immeasurable fortunes for a handful of energetic and unscrupulous men.

Among the first to embrace the far-reaching aim of the railroads was Theodore Judah, the chief engineer of the Sacramento Valley Railroad, who, convinced that a continental railway would be built, announced, “I am going to have something to do with it.” Tireless in this cause, he made repeated forays into the Sierra Nevada in search of a safe and cost-effective passage through them, published a pamphlet entitled A Practical Plan for Building the Pacific Railroad, and taught himself to navigate the corrupt corridors of Capitol Hill. Though he advocated a publicly owned “people’s railroad” rather than “a stupendous speculation for a few to enrich themselves with,” he soon realized that incorporating his proposed Central Pacific Railroad would require private investment. In pursuit of capital, he met with prominent Sacramento businessmen, none of whom shared his sense of optimism—not, that is, until a bearded gentleman took him aside after one such presentation and agreed to a confidential meeting.

Judah’s interlocutor was Collis P. Huntington, a shrewd and acquisitive entrepreneur who, after arriving in California to mine his own fortune, found surer prosperity in selling equipment at heavily inflated prices to other gold seekers. Present also at this gathering were Huntington’s partner, Mark Hopkins; a storekeeper and saloon owner named Leland Stanford; and a dry-goods merchant called Charles Crocker. The Associates, as these four men called themselves, were drawn not only by the prospect of controlling access to and from the Nevada silver mines once a path through the Sierras was cleared, but also by the almost unlimited bonds, land grants, and cash payments ($48,000 per mile of track laid in the mountains) that the federal government would issue to the builders. This formidable quartet agreed to raise the funds to incorporate the Central Pacific but, unbeknownst to Judah, worked quietly behind the scenes to gain full ownership of the railway.

In May of 1869, the famous “Golden Spike” (pictured) was driven into the ground of Promontory, Utah, uniting the Union Pacific from the east with the Central Pacific from the west. This ceremony inaugurated the First Transcontinental Railroad—and gave rise to the personal fortunes of the Associates, who owned nearly all of the CP’s stock, as well as the Southern Pacific, which they managed clandestinely through a bogus board of directors. With the tens of millions of dollars in net profits these enterprises brought in, the erstwhile tradesmen lived in baronial fashion, constructing massively ornate mansions that dominated San Francisco’s Nob Hill. The usually ascetic Hopkins spent $3 million on a confection of turrets and gables that dwarfed everything around it, while Stanford, who was elected governor of California, erected a 50-room Italianate home nearby. Crocker, who later founded Crocker Bank, lavished $2.3 million on his Second Empire residence, which encompassed an entire city block. Huntington, estimated to be worth more than $100 million by the 1880s, lived in a slightly more modest palace across the street.

Yet Judah—the man whose vision and persistence made much of this magnificence possible—did not see his transcontinental dream realized. After a heated dispute over the routing of the railroad, Huntington offered Judah (probably disingenuously) the opportunity to buy the Associates out for the sum of $400,000. Intending to call this bluff, the frustrated chief engineer arranged to meet with the owner of the powerful New York Central, Commodore Cornelius Vanderbilt. However, while hurrying back to the East Coast over the dreaded Isthmus of Panama—from which he had worked so diligently to liberate his fellow travelers—the 37-year-old Judah contracted yellow fever. Shortly after reaching New York, and unable to keep his appointment with destiny, he died.