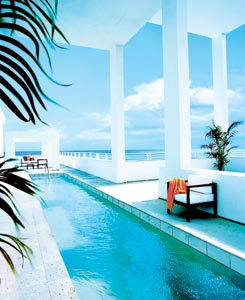 Even after a $125 million overhaul a few years ago, the Shore Club (305.695.3100, www.shoreclub.com), an Art Deco hotel on Miami’s South Beach, failed to create the same buzz as its Collins Avenue neighbors. Then Ian Schrager, the New York hotelier who was the silent partner behind Studio 54, became a part owner and introduced his hotel-as-theater concept, which dictates that the hotel is the backdrop, the furnishings are props, and the guests are stars. Now, in this city where being seen is a serious pursuit, there is no better stage than the Shore Club. On any given night, the garden pavilion abounds with international travelers, impeccably dressed businessmen, and models—or fashionable beauties who could be—sipping $15 martinis.

Among other changes, Schrager replaced the hotel lobby’s bright, overhead lighting with hundreds of candles and added dozens of settees, chaises, and cushions to the garden pavilion for guests to lounge on amid thick, tropical greenery. In short, Shrager has created an atmosphere that is more conducive to lingering than leaving.