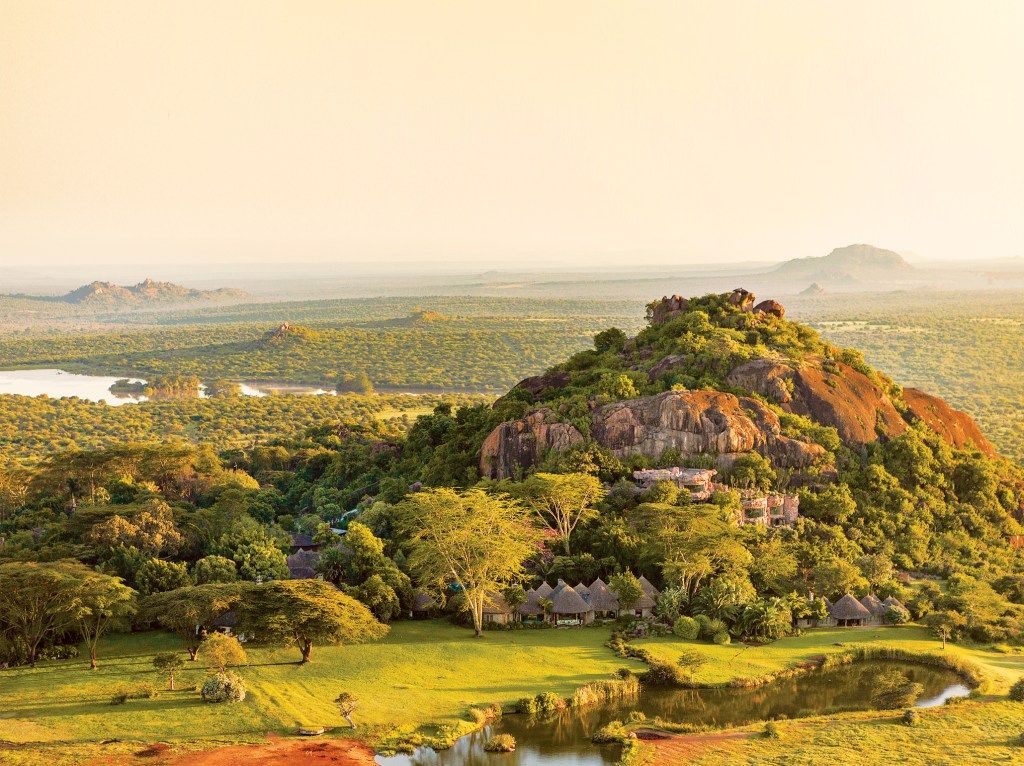 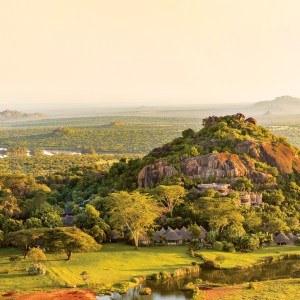 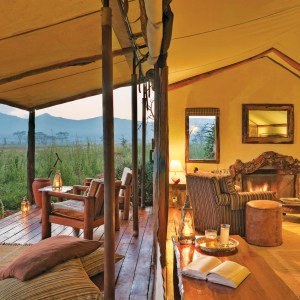 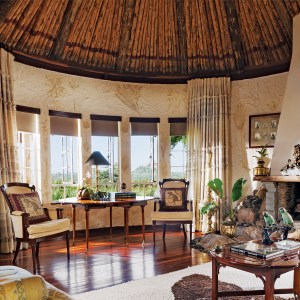 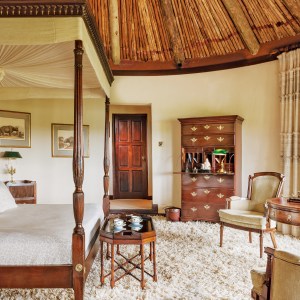 Low-decibel rumbles and pungent aromas fill the air as a family of elephants gathers for a midnight drink around the watering hole at Ol Jogi. Less than 20 feet away, standing silently inside an underground bunker, guests of this exclusive game camp on Kenya’s Laikipia Plateau observe the spectacle while sipping Champagne from crystal flutes. The Bond-like bunker, which is set at the end of a long white tunnel, was the creation of Alec N. Wildenstein, the late patriarch of the French art-dealing dynasty and the longtime owner of Ol Jogi. Initially hindered by the site’s stubborn granite, Wildenstein was determined to have his viewing cave, so he ordered the use of explosives to blast the bunker out of the bedrock.

The Wildensteins’ Kenyan ranch, which recently opened to the public as an exclusive-use rental ($210,000 per week for as many as 14 guests, all inclusive), embodies this over-the-top mentality on multiple levels. The main house is extravagantly appointed with fine artworks and antiques, and the camp’s attentive staff members set dining tables with an ever-changing array of linens, china, crystal, and silver by Hermès, Cartier, Baccarat, and Buccellati. Of the seven individually decorated guest cottages, Simba is particularly sumptuous, with dual bathrooms and dressing rooms, as well as a rounded bedroom with a huge curved picture window overlooking the action at the watering hole.

As the vistas from every room attest, even Ol Jogi’s lavish accommodations are no match for the surroundings. The 58,000-acre expanse offers a delightful diversity of terrain and supports an abundance of game. Guests are free to enjoy the property as they wish, from guided bush walks to picnics on a rock formation overlooking the plateau. In-camp amenities include a pool house with a spa-treatment room, as well as a kitchen helmed by a French chef who has worked for the Wildensteins for decades.

“I am trying to offer something here that I believe does not exist anywhere else from several standpoints,” says Alec Wildenstein, who took over management of Ol Jogi following his father’s death in 2008. “One is exclusivity—you can have the entire ranch. Also, it is a private home, not a hotel. The luxury may seem out of place, but in a funny way, it does fit in with the theme of the place.”

Wildenstein opened the ranch to paying guests to help fund Ol Jogi’s conservation efforts, which include the property’s Wildlife Rescue Center and antipoaching tactics that involve the use of bloodhounds and night-vision technology. He says the management techniques they use to protect rhinoceroses are unprecedented in Africa. Despite these efforts—and Ol Jogi’s high level of security—four rhinos were killed there in July in what is believed to be Kenya’s worst poaching incident in decades. Though a major setback, the incident is not derailing Wildenstein’s long-term plans for Ol Jogi. “The goal is to make it self-sustainable,” he says. “If I die tomorrow, I want this place to survive.”

Like the Wildensteins, their next-door neighbors on the Laikipia Plateau recently opened their ranch to the public. Enasoit, a 4,500-acre retreat owned by a Scandinavian family, is “similar to Ol Jogi in that when you come here, you don’t see another tourist,” says the ranch’s owner. “There are not many places where you can do that.”

Though similar in practice to Ol Jogi, Ena­soit offers a distinct alternative to its neighbor’s opulence. The camp has a more traditional safari-lodge ambience, with six tented suites outfitted with king-size beds, fireplaces, and en suite bathrooms. Two additional rooms in the pool house bring Enasoit’s capacity to 16. (Prices start at $3,900 per night for as many as five adults.)

Game drives, bush walks, horseback rides, and massages are on the list of activities at Enasoit. Guests can also hire the property’s helicopter for excursions, which could include a trip to the Indian Ocean for a cruise on the family’s wooden dhow. Still, like Ol Jogi’s, Enasoit’s finest moments are closer to home: The camp’s watering hole, set just off the mess tent and fire pit, offers prime viewing of elephants, giraffes, zebras, and more. “This is what Enasoit is for me,” the owner says, “sitting around the campfire watching the game.”