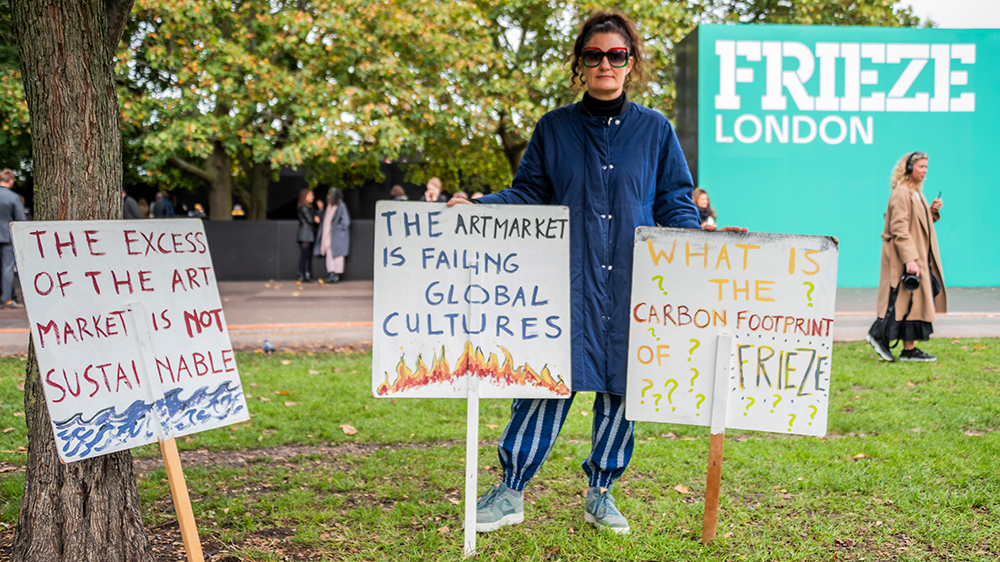 Art fairs—those movable feasts of dealers, collectors and thousands of artworks shipped around the world—have proliferated like crazy. Dozens were on the docket for this spring alone. Everybody complains, but everybody goes. Or they did, before Covid-19 cut down or postponed just about every festival and event slated for spring, from Asia Week New York to Art Paris to the Venice Biennale.

I was at Frieze London last fall when it struck me with force: I had flown from New York and was seeing art dealers whose gallery spaces are only a block or two from my apartment. What was the environmental cost of transporting all of us and the works themselves? Ecologically speaking, it’s hard to imagine a worse concept.

And there was rich irony in that some works had nature-celebrating themes, like Andy Goldsworthy’s Red river rock, Dumfriesshire, Scotland. To recap: I had flown 3,400 miles on a gas-guzzling airplane so I could think green. And I did it more than once.

As it turns out, I’m not the only one hearing the record scratch. “It’s a therapy issue. And it’s existential,” says the painter Alexis Rockman, who has devoted his career to environmental themes. “What’s the right thing to do?” Though Rockman admits he travels a lot, for both business and pleasure, he says he doesn’t go to fairs often.

Schiff estimates she gets on a plane three or four times a year for fairs but now questions every trip. She flies less frequently to her offices in LA and London. “It’s the first step to not going [to fairs] at all,” she says. “It’s biennials and triennials, too. The art world is in nonstop transit.”

The people who run these events are certainly aware of the issues. “It’s been on our mind for years,” says Victoria Siddall, global director of Frieze Fairs. “Ten years ago we had a carbon audit as a company, and the single biggest change we could make would be switching to biodiesel” for power generation at the events. “But it took until last year for a fuel to be developed that we could use.” The London fair I attended was, in fact, powered by recycled vegetable oil, though it wasn’t loudly touted.

That’s progress, but of course it’s the air travel and the freight that really add up. I think of the series of 10 Robert Indiana works that were on view at Frieze Sculpture, all eight feet tall and made of steel. Siddall tells me that shipping works by land and sea has become increasingly popular. “Some artists won’t allow their work to be shipped by air,” she says.

A lot of the burden falls on globe-trotting galleries themselves. “Perhaps artists need to step up and demand more” is how the artist and passionate eco-activist Justin Brice Guariglia puts it (he has a series aptly called “We Are the Asteroid”). He initiated a discussion on the topic with his Belgian gallery, Maruani Mercier, which tackled the problem with carbon offsets.

“We offset all our CO2 emissions,” Laurent Mercier tells me. This strikes me as at least a legitimate start. “That includes our plane tickets, art transports, heating of the galleries, cars and trucks. Our money is used to buy stoves in Malawi to help prevent deforestation and reduce fire fumes.” In 2019, the gallery offset its total estimated yearly footprint of 134 metric tons of CO2.

Justin Brice Guariglia, ‘We Are the Asteroid,’ 2019  Courtesy of the Artist

The artist Jordan Wolfson didn’t want a holiday present from his dealer, David Zwirner, and instead requested that the gallery purchase enough carbon offsets to mitigate Zwirner’s personal international travel in 2019. It did so.

The Zwirner gallery also pointed to its online viewing room as a positive step. It has seen a dramatic uptick in both views and sales. Of course, an online exhibition is not the same thing as the visceral experience of being in the same room as a great work of art. Or viewing it with like-minded people who can be part of a dialogue about it.

People will continue to agonize and possibly brainstorm. How about billionaire biodiesel jets that scoop up artworks on the way to fairs—high-end carpooling! The only way to truly solve the problem might be to follow the lead of Art Basel: In February, it canceled its Hong Kong fair, slated for March. But that was because of the coronavirus. When a public health crisis turns out to be appealingly eco-friendly, you know we’re living in strange days.