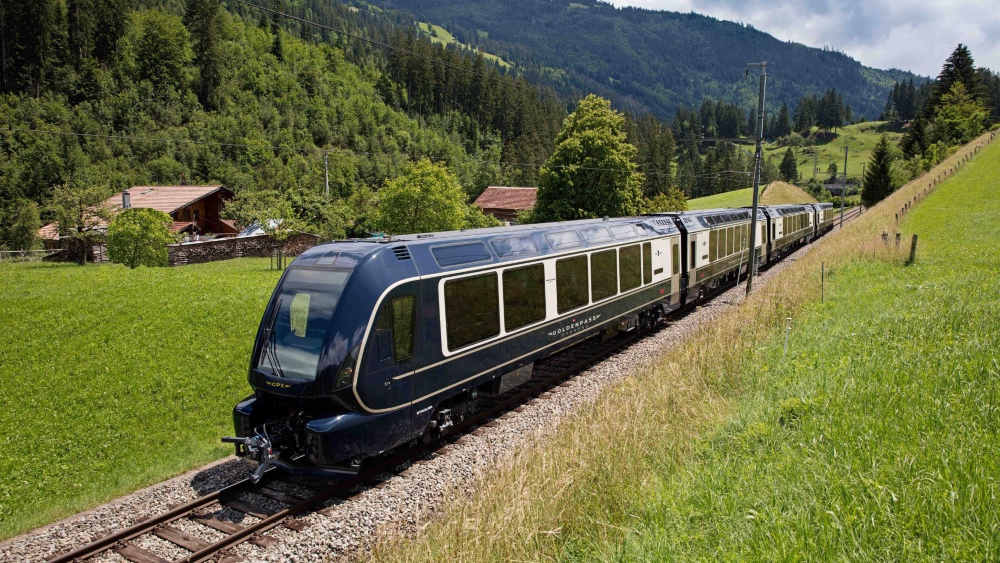 Imagine exploring Switzerland’s beautiful, snow-covered landscapes from the comfort of a luxury train. Well, the Montreux Oberland Bernese (MOB) Railway Company is about to make that dream a reality.

The Swiss outfit is launching a lavish locomotive that will take travelers to the breathtaking destinations of Montreux, Gstaad and Interlaken. The Goldenpass Express train, which first debuted in 2020, has been completely redesigned by Pininfarina. The Italian design firm creates in all different fields, but is best known for producing bonkers hypercars. The all-electric Battista, for example, is currently the world’s fastest street-legal vehicle.

The new train, which will begin the new service on December 11, will cover 71 miles in around three hours. Stops along the way include the picturesque towns of Boltigen, Erlenbach, Oey-Diemtigen and Spiez, to name but a few. Of course, the views from the carriage are the real highlight. The large windows promise no reflection, too, so you’ll be able to snap some great pics.

The seats are separated into three main categories: Second Class, First Class and Prestige Class. The latter includes heated seats with panoramic views. Passengers can also indulge in light bites, such as caviar or assorted cheeses with wine. Each seat also offers plenty of storage space for your bags, ski gear and the like.

“With the Goldenpass Express, we are facing a spectacular technological challenge, shifting from narrow gauge to standard gauge,” Georges Oberson, General Manager of MOB, said in a statement. “We also wanted this tourist train to be beautiful and elegant. That’s why we assigned the task to Pininfarina, one of the most prestigious design companies in the world.”

Pininfarina is well-versed in designing trains. In 1993, the firm designed the Cristal Panoramic Express for MOB. It went onto become one of the Swiss company’s most successful trains. Let’s see history repeats itself with the refreshed Goldenpass Express.