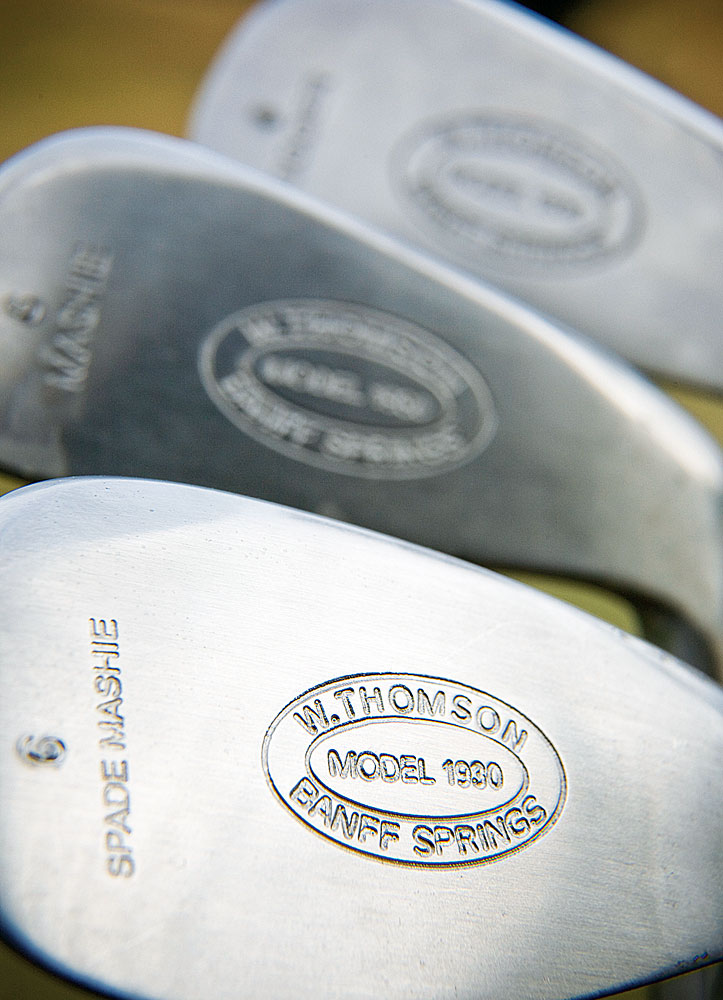 Without the bam of a Big Bertha behind it, my drive on the 602-yard, par-5 seventh hole at the Fairmont Banff Springs golf course falls 70 yards shorter than it normally would. My ball lands on the fairway, but it takes me two more strokes—one with the Spoon and the other with the Jigger—to get within chipping range of the green. When I draw on the Mashie Niblick for a gentle pitch and putt, my ball goes up, drops, and just stops. It is as if it has landed in glue. Annoyed (because chipping is one of the stronger parts of my game), I three-putt for a seven.

Steven Young, the director of golf at this jewel in the Canadian Rockies, explained to me before our round the need for a more subtle, slow-and-low swing. “You can’t do a big cock and slam down, because the clubs won’t take the torque,” he said. “You have to be gentle.” Young’s leather-trimmed canvas bag, like mine, contains balls with square, wafflelike indentations. It is also filled with a Spoon, a Jigger, a Mashie Niblick, a Brassie, and other replica 1930s-era hickory-shaft clubs that the Scottish and American golfers of that period played with and named. Young’s attire suits his equipment; he is wearing a tweed cap, a tie, and knickers.

The clubs, balls, and clothing are part of Fairmont Banff Springs’ Heritage Golf Experience. The resort began offering the package last year, to commemorate the 80th anniversary of the opening of its course, which has since been expanded from 18 to 27 holes. Heritage rounds are played on the original 18 holes—the way Sir Stanley Thompson intended them to be played.

Thompson, a Toronto native who was knighted for his contribution to golf and is the only sportsman ever named a Person of Historical Significance by Canada’s Monuments Board, is said to have had three passions: old whiskey, young women, and golf. “Stanley put 100 years of living into about 60,” Young says with a smile. An accomplished golfer, Thompson designed more than 100 courses in the Americas (most of them in Canada) from 1912 until his death in 1953. Banff Springs, the world’s first course that cost more than $1 million to build, is considered his masterpiece.

The Heritage Golf Experience runs about $300 per person, or $560 for a twosome (depending on the U.S.-Canada exchange rate). The fee includes rental of the hickory-shaft clubs and vintage-style balls, and instructions on how to play with the clubs. The services of knickers-clad caddies are available for an additional fee.

On the seventh hole, Young’s drive falls in the middle of the fairway, 250 yards out. His second shot lands in the bunker that Thompson placed 100 yards from the green. Young needs two strokes to get out of the bunker, and his second shot rolls off the back of the green and into another bunker. After using a Niblick to get onto the green, he emerges from the second sand trap with a smile. “If I had my regular 8-iron, many of these bunkers would be irrelevant because you would just sail over them,” he says. “But playing with hickory sticks, we are playing the course as Stanley Thompson designed it.”