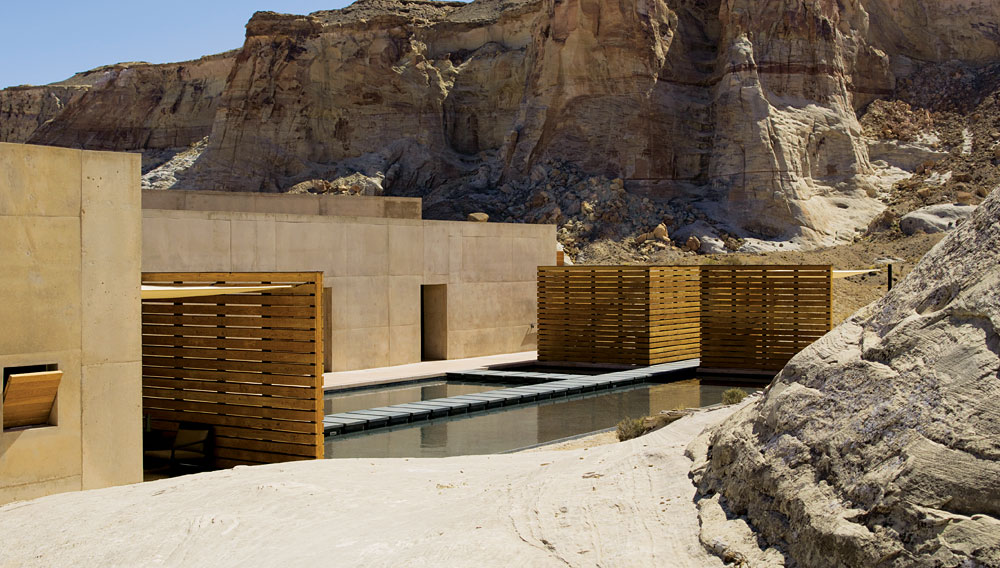 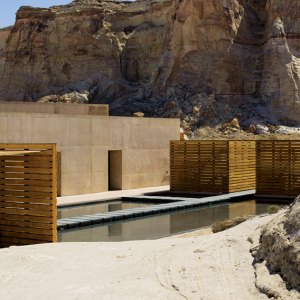 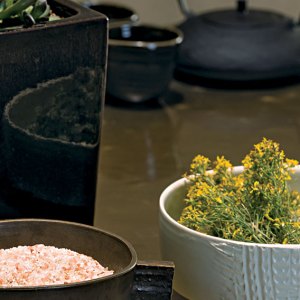 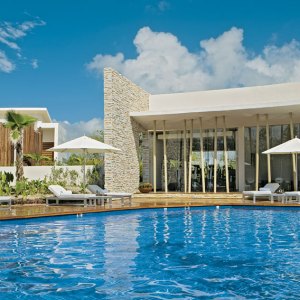 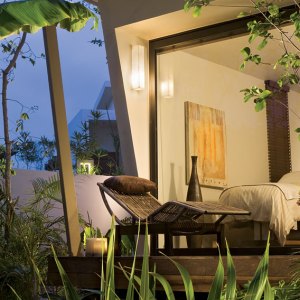 Beads of sweat form along my brow and snake their way down the bridge of my nose, pausing just a moment at the tip before falling to the ceramic-tiled floor at my feet. Wisps of steam rise from scalding volcanic rocks piled in the temazcal’s central pit, while the pounding of a leather-encased drum reverberates off the redbrick walls that surround me. I listen as Leon—the shaman who sits across from me, keeping time with the drum—leads ceremonial chants and encourages me to participate with chants of my own. And though I try to concentrate on the reception of energy through the center of my torso, which Leon explains will rise up as I inhale and will escape through my mouth as I exhale, I find myself focused mostly on the intense heat-induced tingling in

my chest and throat that ebbs and flows with each deep breath that I take.

The temazcal, a ritualistic sweat lodge, is indigenous to the pre-Hispanic cultures of Central America and comes from the Nahuatl word temazcalli, which means “house of heat.” However, historians believe it could also come from the Aztec words teme (to bathe) and calli (house). The ritual, which originated in pre-Columbian times throughout Mesoamerica—the region that runs from central Mexico south to Costa Rica—has been revived at the Rosewood Mayakobá (www.rosewoodmayakoba.com), a 128-suite resort spread out over a series of small islands and mangrove jungle set within a protected stretch of the Yucatán Peninsula. Here, the one-hour treatment is conducted by a shaman who blesses not only each participant but also the volcanic rocks heated in a brick oven adjacent to the small, domed structure, as well as the mixture of herbs and water, which are methodically poured over the rocks at various intervals throughout the treatment.

The indigenous cultures that first utilized such a traditional steam bath did so for its curative properties and considered it to be a means to achieve improved health and wellness. In fact, as evidenced by the temazcal treatment offered at the Rosewood Mayakobá, many Mesoamerican societies are returning to their roots and reviving the sweat lodge ritual for its ability to cleanse the mind, body, and spirit.

While I find it difficult to focus on such spiritual energy swirling around me during the ritual, I am overcome by a resolute sense of peace afterward—a discovery that reveals the true potential such an indigenous treatment can have.

Back To the Basics

In the last few years, destination spas have experienced a rebirth—one predicated by the recent economic downturn. With a slumping economy, spa directors were forced to streamline and, in doing so, stripped away many of the superfluous bells and whistles that once had cluttered their treatment menus. According to Deborah Waldvogel, the chairman of the International Spa Association, prior to the downturn, destination spas found themselves locked in a battle with each other and, as a result, continuously introduced more complex and over-the-top treatments to remain competitive.

“Treatments have simplified,” she says. “There’s been a trend back to the basics. It’s brought some authenticity back to the experience and it’s refocused on the therapeutic and health benefits, which is important because that was always the intent.”

In some cases, a return to the basics is a return to indigenous treatments like the temazcal, and Waldvogel, who serves as the director of spa development and operations for Sedona Resorts, is well-versed in the implementation of such experiences. As the previous director of operations at Mii amo, a destination spa in Sedona, Ariz., that, years ago, incorporated many rituals and practices of nearby Native American tribes, Waldvogel says there’s an element of fun when learning about the history and significance of those Native American cultures. But it’s a serious matter, as well. “You have to learn that level of respect,” she says. “We needed to keep everything authentic.”

That authenticity is what spa enthusiasts are seeking today, though the demand has grown exponentially over the last few years. “Spa guests are more savvy today than they were even five years ago,” Waldvogel says. “They’re looking for an experience that they can’t get at home, but they’re also focused on what’s customizable and what can be tailored to meet their needs.”

A treatment that accomplishes both can be found at the Regent Palms (www.regenthotels.com) in the Turks and Caicos Islands. Known as the Zareeba, which means “protected enclosure,” the treatment includes an herbal steam bath and a subsequent massage—the combination of which was introduced to Angel Stewart, the spa’s founder, by a Caribbean native six years ago. It begins with the brewing of a customizable mixture of six herbs (lemongrass, eucalyptus, ginger, dogwood, pimiento, and bay leaf), which is transferred to a pot inside a wooden enclosure approximately 4 feet tall, 3 feet wide, and 2½ feet deep. For the next 15 minutes, recipients sit inside—with a porcelain cauldron between their knees—and stir the herbal mixture. The rate and vigor of that steering intensifies the herbal aroma and increases the heat inside the enclosure. “The whole intention behind the Zareeba is to give you a very self-customized experience,” says Waldvogel. “The stirring and the rhythm is giving you that inhalation and either a stronger or lesser experience in terms of the herbs. So then with the massage … as the therapist is guiding you through the treatment, if you need relaxation, the strokes will be customized to give you a simple relaxation. If you’re someone who wants to be reenergized, the strokes might be a little more rapid to keep up with the rhythm that you’ve created with that experience. So every time you do it, it may be different.”

Waldvogel says that each spa-goer will react differently to the treatment, of course, and no reaction is wrong or inappropriate. “I always compare it to the sweat lodge experience,” she says. “People have very different frames of mind coming out of the sweat lodge. It’s interesting to see that transformation. They’ll have a new outlook; they might be happier or a little more quiet or subdued. Everyone reacts differently.”

The medicinal and healing properties of the herbs and the aromatherapy are not lost on the recipient, but for those who can remove themselves from the moment and reflect on the scene, it’s difficult not to inject a healthy dose of levity to the proceedings. Sitting naked and stirring a concoction of herbs boiling in a ceramic pot between my knees, the experience conjures up images of the three witches from William Shakespeare’s Macbeth and, if nothing else, prompts a chuckle and a silent recitation: “Double, double, toil and trouble; Fire burn, and caldron bubble.”

Naturally, not all memorable spa treatments require so much work. If experiences such as the Zareeba at the Regent Palms are noteworthy for their elements of self-participation, the flotation therapy at Amangiri (www.amanresorts.com) in Canyon Point, Utah, is distinctive for requiring absolutely none. Thanks to a highly concentrated pool of salt water that mirrors the buoyancy of the Dead Sea (four pounds of salt for every gallon of water), a spa-goer can float in a darkened, domed space with no effort at all. “The stillness that it creates and the absolute darkness really transports you to another place,” says Jeff Berkus, who has experienced the flotation therapy twice so far this year.

Intended to create a sense of relaxation that is unattainable in any other way, Amangiri’s flotation therapy combines buoyancy with a completely dark and silent environment. With that sense of relaxation come other, more measurable benefits. While a person is floating, the pressure of gravity is removed from the joints and muscles, which reduces blood pressure and oxygen intake but increases blood flow and the distribution of red blood cells. Under those conditions, the body can more quickly heal itself, which is why competitive athletes often incorporate flotation therapy into their training. By transporting such a therapy—normally offered in small, confined tanks—to a more spacious and darkened room, Amangiri can offer guests a more complete sensory-reduction experience, not to mention one that is more luxurious. “Within the first five minutes, you start to go into deep states inside of your mind,” says spa director Damian Viera. “You arrive at a place of bliss with almost no participation at all.”

For Berkus, it’s the darkness that consummates the treatment. “When you’re lying there, opening and closing your eyes, and you realize that you’re not seeing with your eyes [because of the complete darkness], you start perceiving with other parts of your body,” he says. “It’s the only way that I know that you can be perfectly balanced. I think the only thing that would be close is experiencing zero gravity.”

Gravity can play an important role, however, though Viera says such an impact materializes after the fact. “When all these senses are reduced to that degree and you’re floating in the ether, it brings you to a point where massage is effective to a whole new degree,” he says. “You’ve just been floating in space for a half hour, so when you get on a table and feel gravity again and you get a massage, there’s no muscular resistance. We’re talking about a different experience altogether.”

Hour-long flotation therapies followed by full-body massages might appeal to some, but for others, the thought of spending an entire day at the spa creates more stress and anxiety than any full day at a spa could expel. For those individuals, One&Only Palmilla (www.oneandonlyresorts.com) in Los Cabos, Mexico, has unveiled a menu tailored to men that includes treatments allowing them to reap the benefits of many spa therapies in a fraction of the time. “They have a perception of a certain treatment, but if it’s presented in a way that is targeted to men, it opens up the possibilities that they’ll consider it,” spa manager Barbara Olvera says of men venturing out into the world of destination spas.

Nowhere on the new men’s menu is that philosophy more apparent than the “Type A” journey, an hour-long treatment requiring the work of three therapists who perform a manicure, pedicure, and purifying facial. What may sound overwhelming is—paradoxically—more inviting. A man may be averse to a manicure, a pedicure, or a facial on its own, but when all three are performed together and in a synchronized fashion (as they are during the resort’s Type A treatment) the experience prevents the recipient from spending any length of time fixated on the details of each one. Plus, it’s difficult not to entertain thoughts of power and importance when you have the undivided attention of three therapists. And what man would turn down a situation like that?

While the Type A journey aims to introduce men to treatments and experiences that they might not consider otherwise, the remainder of the men’s menu includes massages and exfoliating scrubs, the likes of which also would appear on the spa’s traditional menu but with scented products and approaches tailored to a man’s psyche. “A lifestyle treatment should be targeted to both women and men,” says Olvera. “The health benefits will be the same but the techniques and products used will be very different.”

And according to Isabelle Gagnon, a professional health coach, the spa’s new male-focused menu may open men’s eyes to what women have known for years. “Wellness is not just about fitness and food,” she says. “You have a need for human touch and for being pampered.”