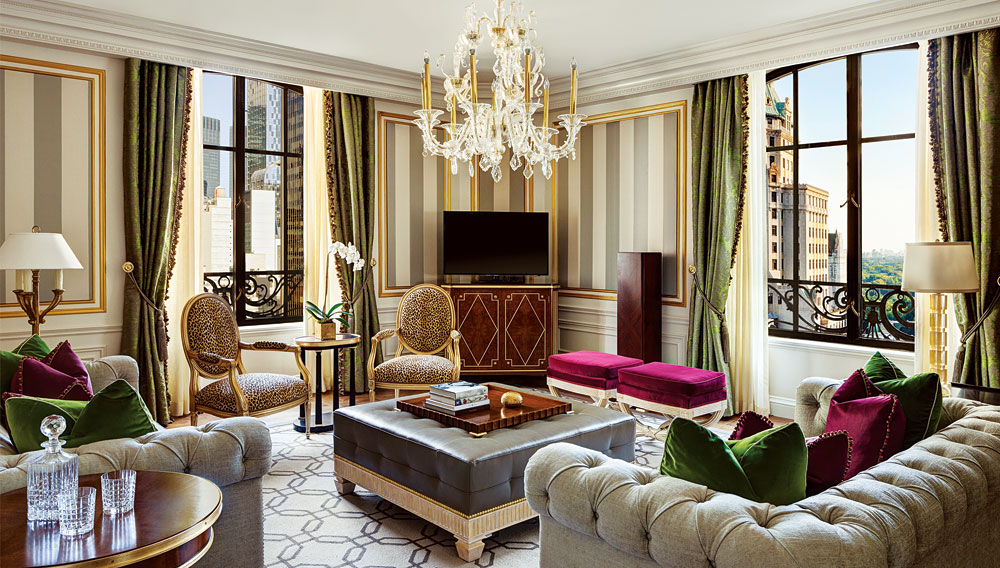 Building luxury hotels in Gilded Age New York became a habit for the Astors. The family’s first foray into the field was made by John Jacob Astor, whose Astor House, erected in 1838, was an unapologetically bourgeois bastion that his two aristocratically inclined great-grandsons would have disdained. These cousins, William Waldorf Astor and John Jacob Astor IV, were driven to become hoteliers not by the pursuit of profit but by mutual hostility. William Waldorf, as the eldest son of the eldest son, regarded himself as the head of the family upon his father’s death, while John Jacob IV (Jack), son of the Caroline Astor, naturally assumed that his branch took precedence. In 1893, the frustrated William razed his father’s house, which stood adjacent to his aunt’s residence, and constructed a 13-story luxury hotel called the Waldorf. After his mother was driven from her home by the horror of living alongside paying guests, Jack threatened to install stables on the lot; in the end, however, he contented himself with making his competing establishment, the Astoria, four stories taller than his cousin’s. The two structures were later connected to form the Waldorf-Astoria.

While William immigrated to England, Jack continued his career as an upscale innkeeper. In 1904, he opened an even more opulent address at 55th Street and 5th Avenue. Now 110 years old and the flagship of a global brand, the St. Regis New York continues to bridge the temporal and cultural divide between Old New York and the modern city. “Even when the hotel first opened, it was state of the art,” says Paul James, the property’s global brand leader. “It had elevators and air-cooling systems—things that even the wealthy did not always have in their homes. Today, we try to offer this same experience to guests.”

Maintaining this standard was the goal behind the hotel’s recent multimillion-dollar renovation, which, James points out, was informed by the belief that timelessness is contemporary. “The building’s history and lineage guided us,” he says. “We wanted to amplify the hotel’s traditions for a contemporary clientele.”

The most dramatic changes, however, were made to the King Cole Bar, named for the famous mural by Maxfield Parrish, which was cleaned during the remodeling. A Manhattan institution since its opening in the 1930s, the King Cole Bar and Salon now extends outward, around the dining area, and this combined space is under the management of the chef and restaurateur John DeLucie, whose menus embrace the philosophy of fusing old and new. “The St. Regis has an amazing culinary lineage,” he says. “We wanted to maintain that elegance while having a little fun with it.”

While guests sit beneath Parrish’s merry monarch, sipping Red Snappers (the original name for the Bloody Mary), more changes are under way around them: A 1,600-square-foot gym opens in June, for example, and a new spa will debut in early 2015. Such amenities might have tempted even Mrs. Astor to check in.