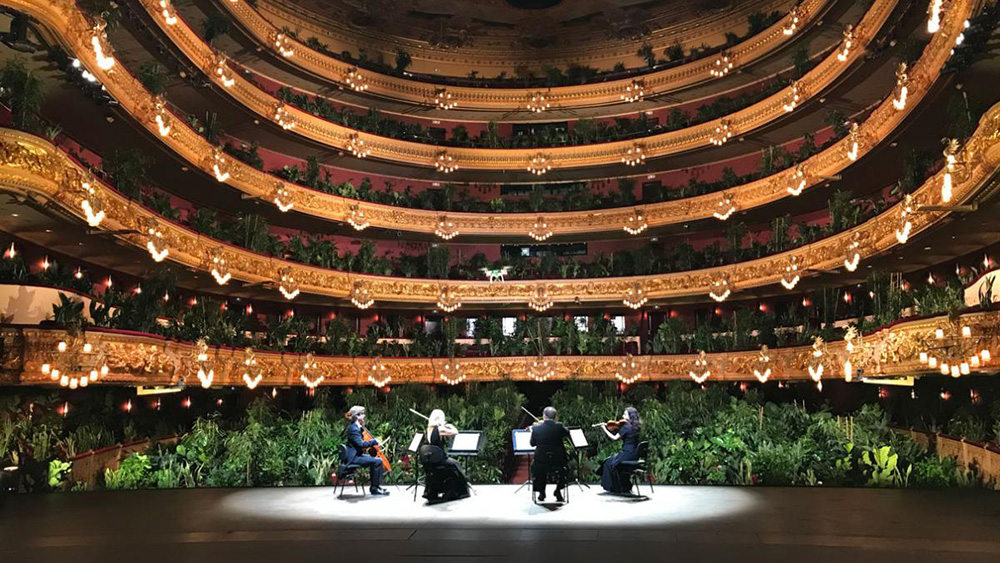 Performers at Barcelona’s Gran Teatre del Liceu opera house are used to performing in front of important figures. But chances are none of the musicians who took the stage there on Monday had ever played in front of one quite like this. That’s because their performance was being taken in by a crowd made up entirely of potted plants.

The storied opera house reopened its doors with a performance by UceLi Quartet on Monday, according to CNN. But rather than playing to an audience filled with art-loving VIPs, the string quartet performed before a packed house of 2,292 plants.

Dreamt up by conceptual artist Eugenion Ampudia, “Concierto para el bioceno” was meant as a special way of marking the lifting of Spain’s coronavirus lockdown. As part of the concert, the quartet performed Puccini’s “Crisantemi” for the well-behaved, if disturbingly quiet, audience. The flora—which included palms, ficus trees and Swish cheese plants—were brought in from nurseries around the region and will now be donated to local healthcare workers “in recognition of their work.”

While no humans were present for the concert, anyone could watch from home via a livestream set up by the opera house. A reduced capacity crowd could have taken in the show, but organizers felt that a human-free performance was the right way to recognize what the venue and country have been through over the past few months.

“After a strange, painful period, the creator, the Liceu’s artistic director and the curator Blanca de la Torre offer us a different perspective for our return to activity, a perspective that brings us closer to something as essential as our relationship with nature,” the opera house said in a statement.

Spain’s state of emergency forced the Liceu to close its doors in mid-March. Although the country has now lifted its strict lockdown, it has been particularly hard hit by the Covid-19 outbreak. As of press time, John Hopkins University reports that the nation has recorded 246,752 cases and 28,325 deaths because of the virus.