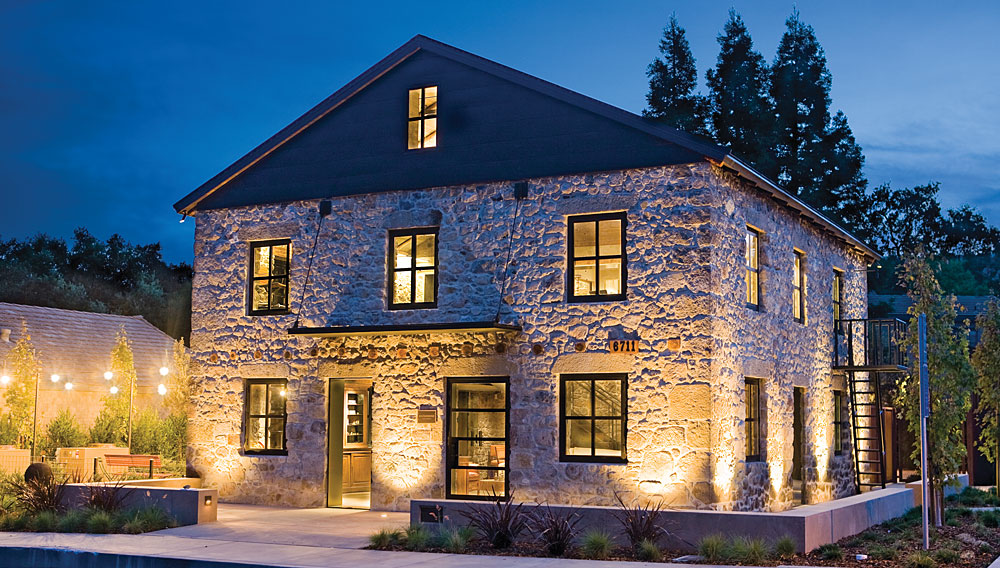 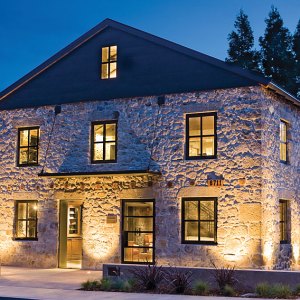 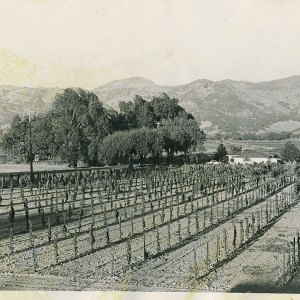 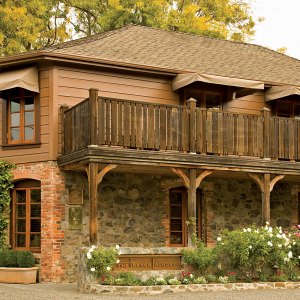 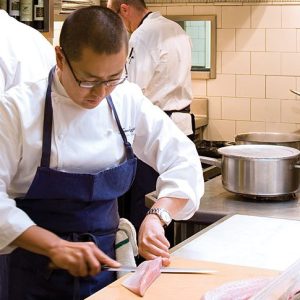 A little more than a year ago, the old stone building on Yountville’s Washington Street, between Starkey Avenue and Pedroni Street, resembled the excavation of a medieval tower. And like a zealous archaeologist, its owner, Michael Polenske, led a hardhat-clad group through the hollow shell to view its exposed beams and bare dirt floors, along the perimeters of which had been dug deep trenches. “When you start down a path like this,” he said, “you never know what you’re going to find. You have a plan in place, but you have to adapt your ideas to every new discovery.”

The plan to which Polenske referred that day was the renovation of the historic building he had acquired in this small town in the heart of California’s Napa Valley. The investor and owner of Blackbird Vineyards (one of the area’s most admired boutique producers) had long envisioned a private, clublike space in which guests could simultaneously enjoy his own personal passions—history, art, design, and fine wine. He chose the unreinforced stone building, formerly known as the Burgundy House Inn, for its beauty, character, and local significance, as well as for its imperfections; Yountville’s proximity to his vineyards in the Oak Knoll District was a bonus. The idea of contrasting the structure’s weathered walls and wood beams with more modern elements appealed to Polenske, who named his gallery and tasting room Ma(i)sonry Napa Valley (the moniker is an amalgam of the words maison and masonry—a combined reference to the 1904 edifice’s original function as a residence and its mode of construction). However, as he noted on the hard-hat tour, preserving and remodeling the home-turned-hotel, which is on the National Register of Historic Places, would require not only patience but a flexible budget.

Polenske’s project is one of several new developments that, in a relatively short time, have transformed Yountville from simply the wine country’s favorite place to dine into a destination in its own right. While pilgrims have made their way there since 1994, when chef Thomas Keller reopened Napa Valley’s culinary mecca, the French Laundry (also on the National Register of Historic Places), the town at that time offered few other attractions. “People didn’t come to Yountville that often when I first came up here,” Keller recalls. “Napa Valley, in all of its wine glory, started around Oakville, and anything south of that wasn’t really on the radar yet. Oakville,

Rutherford, and St. Helena were certainly very popular back then, and, to a certain extent, Calistoga. But Yountville was still kind of a sleepy town. There was a nice moderate hotel here, a couple of small inns. But it was just kind of starting to emerge.”

Keller’s imaginative, Californiainfluenced reinterpretations of fine French dishes were instrumental in awakening Yountville from its slumber. His emphasis on local ingredients and carefully constructed tasting menus quickly earned him critical acclaim, three Michelin stars, and a broad international following among the most discriminating food and wine enthusiasts, whose unrelenting demand for reservations keeps the restaurant booked months in advance. “We have people who are very sophisticated in food and wine,” Keller says. “But there are also people who want to learn about food and wine, so they come. We are very lucky in Napa Valley to have that kind of desire from our guests.”

This initial success prompted Keller to open three other eateries on Washington Street: first Bouchon, a more casual French bistro–style restaurant  then Bouchon Bakery; and finally Ad Hoc, an upscale diner that specializes in Kelleresque takes on American comfort food. Other major talents soon followed Keller to the area. “The media call [Yountville] the culinary capital of Napa Valley, if not of California,” Keller says, citing, among other notable neighbors, Philippe Jeanty’s Bistro Jeanty, established in 1998, and Richard Reddington’s Redd, unveiled in 2005, each of which brought a single Michelin star to a street that already boasted four (three for the French Laundry and one for Bouchon). “What do we have?” Keller asks. “Six Michelin stars in town? And now Michael Chiarello has just opened up.”

Keller is alluding to Bottega, the latest restaurant by the founding chef of Tra Vigne (still one of the area’s most popular casual eateries) and the entrepreneur behind NapaStyle, the culinary emporium and online catalogue that offers a taste of the simple-yetsophisticated lifestyle that visitors have come to associate with the region. Like the French Laundry, Chiarello’s new creation is housed in a historic building, one of a series of buildings dating to 1870 (see “Vintage Shopping,” page 88) that now form the park and retail center V Marketplace. Bottega showcases this architectural heritage in its interiors, where roughhewn timber beams stretch above the glossy patina of restored hardwood floors. Exposed masonry walls lend an old-world accent to spacious seating areas, while French doors open onto the terrazzo—a veranda, with two wood-burning fireplaces, that brings the outdoors inside.

Chiarello says his menus are even more Italian than those at Tra Vigne—meaning he places much greater focus on the character of individual ingredients than on combinations of flavors, much like a musician who concerns himself with the purity of single notes rather than complicated chords. “I’m less about what goes on the pasta,” he says, “and more about the pasta itself. I really want the ingredients and the technique of how they were cooked to shine through.” Examples include a bistecca fiorentina that is grilled and then roasted on a salt slab, which forms a crust on the meat’s underside, and ancient-grain polenta served in a sealed jar with caramelized wild mushrooms and balsamic game sauce.

Diners who lunch at Bottega may choose to indulge their senses further at Spa Villagio, the new spa at Villagio Inn, which is located near V Marketplace and is open to day visitors as well as hotel guests. This 13,000-square-foot refuge—with its tapestry-upholstered antique furnishings, terra-cotta roof tiles, and stone arches—evokes early California architecture. The facility’s separate wings for men and women offer a total of 16 treatment rooms, and the five personal suites located on the upper level provide, among other amenities, outdoor hydrotherapy baths, relaxation lounges with fireplaces, wet bars, flat-screen televisions, and Bose surround-sound systems. Guests staying in the suites can choose from four signature three-and-ahalf- hour treatments that have been designed to reduce stress, energize the body, improve the radiance of the skin, or offer couples a romantic retreat.

Not far from Spa Villagio, the recently opened Bardessono hotel tenders a different kind of sanctuary. This extraordinary six-acre property—which was once the home of the Bardessono family, whose descendants were early settlers in Yountville—redefines our concept of a wine country retreat. “I wanted to do something of the place—something that reflected my environmental values,” explains owner Phil Sherburne, whose proposal to construct a “green” luxury resort appealed to the area’s residents. “There’s an impression that green means down-market. I believed we could do an environmentally responsible development that would feel even more luxurious.”

Sherburne chose a contemporary, minimalist style of architecture that emphasizes the beauty of the raw materials, which include recycled wood (some of it from wine barrels), carbon steel, tiles cut from the stones of the Bardessono home’s cellar, and rammed-earth walls, which were made by mixing small amounts of water and cement with the site’s own soil and compacting the blend under high pressure. The 62-room resort, complete with its own spa and restaurant, is divided into four clusters, each named for the tree that dominates its landscaping (Magnolia, Cypress, Olive, and Birch). The spacious rooms have floor-to-ceiling windows and open onto outdoor spaces (either terraces or walled gardens), yet they remain private, thanks to their careful placement and to motorized blinds, which automatically open and close when guests enter or leave. Concealed solar panels provide much of the resort’s power, while the entire facility is heated and cooled by the property’s own geothermal springs. Although the complex is set back from the street, Sherburne extended the community’s walking paths through the grounds. “I wanted this project to add something to the community,” he says. He also developed a bicycle center to enable the guests to experience Yountville and its surroundings. “I want the guests who come here to have the opportunity to interact with the town. That’s really one of the advantages we offer—a quiet retreat that also gives you access to all the area has to offer.”

Among the area’s attractions is Polenske’s “living gallery,” Ma(i)sonry, which opened on schedule in October 2008. The dark, warrenlike Burgundy House Inn is now a light, airy space whose walls and tables are festooned with fascinating objects—an eye-popping assortment of sweeping canvases, furniture, glasswork, and curiosities that could, indeed, be artifacts from the archaeological dig that the site resembled only a year before. Guests of the Bardessono hotel who wander over here to sip a glass of Blackbird Vineyards wine or stroll through the garden will find that Polenske has indeed captured what he likes to call the “life aesthetic” of Napa Valley—and especially of the once-sleepy Yountville. “[Ma(i)sonry] is not only about preserving the past,” he says, “but about making it relevant and meaningful to our lives today.”