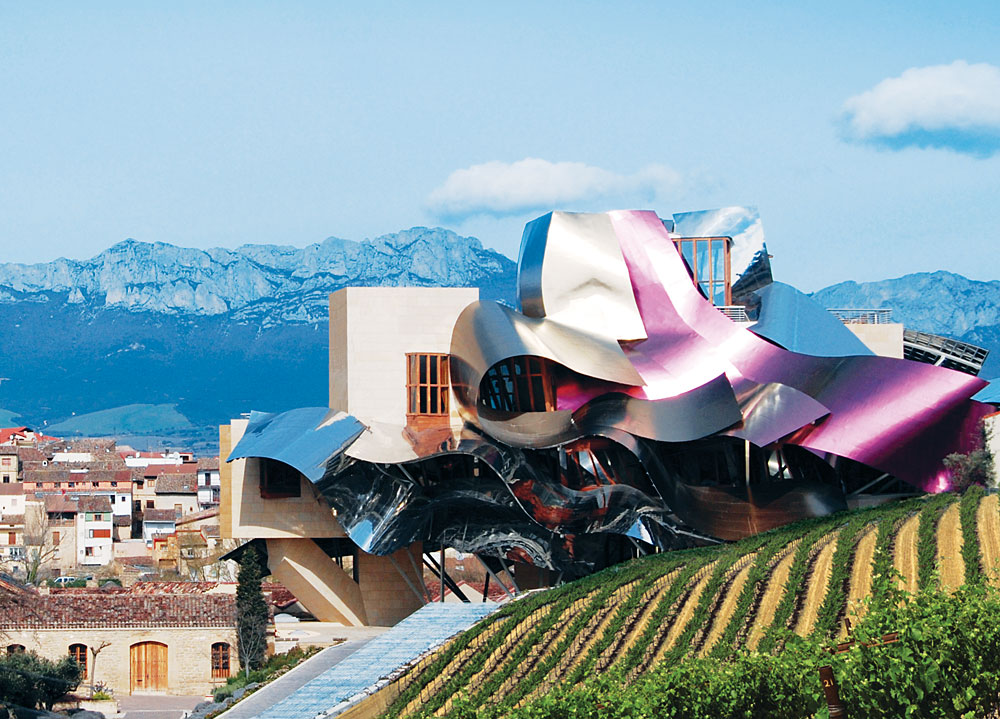 Arriving at the new Hotel Marqués

de Riscal, perched atop the Riojan winery’s cavernous aging cellars at the edge

of the medieval village of Elciego, Spain, recalls the scene from Steven

titanium ribbons in rose, silver, and gold swirl about the Frank Gehry–designed

Fortunately, there are no trapdoors, unearthly lights, or

aliens—just the attentive staff of the 43-room boutique hotel, managed as part

of Starwood’s Luxury Collection. Officially opened last October with a visit by

King Juan Carlos, Riscal certainly qualifies as one of the world’s most

According to Francis Hurtado, a descendant of the founder of

the 148-year-old winery, the company decided during the 1990s to broaden its

outreach by creating a City of Wine, a hospitality complex that would include

new winery buildings and a world-class hotel. Gehry, who was at the time just

completing the Bilbao Guggenheim about 80 minutes to the north by autoroute, was

an obvious candidate for the project’s architect. But while the choice of Gehry

was obvious, the best method for securing his services was not. Riscal’s

elaborate courtship, however, finally succeeded when the winery lured Gehry into

the estate’s dusty wine library, located in the oldest part of its cellars, and

served him a Marqués de Riscal 1929, the Canadian’s birth year.

Unlike the Guggenheim, where Gehry’s architectural flourishes

are integral to the building’s function, the Riscal’s flowing canopies are

countryside views. The main building contains 14 rooms and suites, while the

to the bottle-aging cellar, selections from which are served at the hotel’s

elegant bar just off the lobby.

Guest rooms in the main building are angular with high

screens mounted to their walls. Floors are blond wood, and the bathrooms have

separate showers and tubs of green marble. Each room is dominated by a large,

Number 8, the Gehry Suite, looks across a narrow ravine to

Elciego (a five-minute walk away) and its 16th-century Iglesia San Andres. Bed

linens are by Rivolta Carmignani, tables and chairs by Alvar Aalto. “Gehry

designed or specified much of the furniture,” says Starwood’s Vanessa Ferrer.

leading to a rooftop patio. “Our goal is to have around 1,000 books related to

from the hotel proper, across a short footbridge, to the newest Caudalie

Vinothérapie Spa, where they can be misted with grape-seed extract and

invigorated by scrubs and wraps made of grape skins and honey.

Francis Paniego, the first Riojan chef to receive a Michelin

and Riojan dishes—some traditional, some modern. His tomato tartare, for

example, was inspired by a trip to Morocco. “I blended dates for sweetness with

local tomatoes,” Paniego says. “Travel is important, but you can always find new

It is fitting that this project, which began with a glass of

wine shared by architect and winemaker in the cellar, should also culminate with

during the king’s visit. Virtually unavailable except at Marqués de Riscal’s

City of Wine, this exceptional red provides ample excuse for a repeat visit.

Location: Elciego is in the legendary Rioja Alavesa wine

region, within the Basque territory, 80 minutes from Bilbao International

Forty-three rooms and suites, including the Gehry Suite, which was decorated

according to the architect’s specifications. Rates include daily breakfast.

Restaurant, the creation of Michelin-starred chef Francis Paniego. Both

Wine: In addition to touring the winemaking facility and