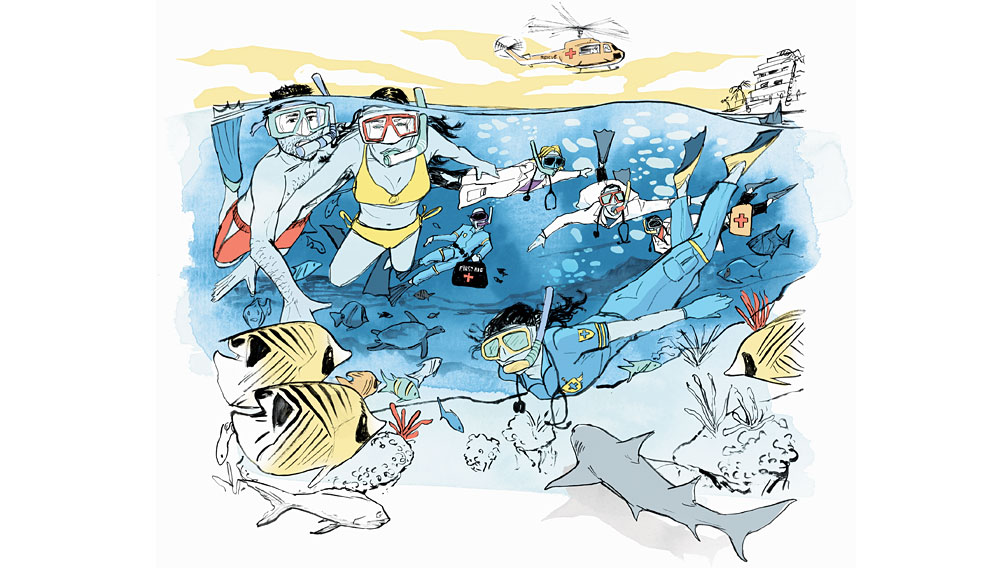 Ted Panhuis’s monthlong motorcycle journey through Yukon, Canada, last summer ended earlier than planned when his 2008 BMW R1200 GS Adventure hit a patch of deep gravel. “I tried to straighten the back wheel, but to no avail,” says Panhuis, a retired veterinarian from Ohio who has been riding motorcycles since the 1960s. “According to my friends, I was unconscious for four to five minutes after hitting the dirt.”

Panhuis’s friends called the nearest hospital— 200 miles away in the town of Whitehorse—but instead of just waiting for an ambulance to arrive, they enlisted the help of an Australian tourist who had stopped his Volkswagen Beetle at the crash scene. He agreed to drive Panhuis toward Whitehorse, escorted by one of the motorcyclists, until they crossed paths with the ambulance that the hospital had dispatched.

At the hospital, the emergency-room doctors cataloged the damage: bruised lungs, a fractured hand, fractured ribs, a lacerated liver, and a fracture to the T4 vertebra, a spinal bone that makes up part of the rib cage. The doctors had become accustomed to treating motorcycle-crash victims; Panhuis was their fifth patient who had fallen victim to the same stretch of road, where meltwater from a nearby mountain had stripped away the asphalt. But the doctors did not possess the neurological expertise to determine whether Panhuis’s broken back was stable enough for them to transfer him to a U.S. hospital.

Not long ago, Panhuis’s condition would have grounded him in White­horse until his backbone had knit. However, medical innovations helped shorten his stay to four days. The Whitehorse doctors sent digital scans of his T4 fracture to colleagues in Vancouver, who deemed it stable. Once it was clear that his liver was also in good enough shape for him to be moved, Panhuis invoked his membership with MedjetAssist, a company based in Birmingham, Ala., that specializes in arranging medical-related air transfers. The company had him flown to a trauma center in Columbus, Ohio, closer to his home.

Panhuis traveled aboard a Learjet, escorted by medical personnel who kept him lying flat and connected to IV fluids and an electrocardiogram (known as an ECG or EKG) monitor. He spent two days in the Columbus hospital before returning home. “I’m back riding again,” Panhuis says. “I normally ski every other winter in Colorado, but I’m going to skip that this year.”

Thinking of the other riders who landed in the Whitehorse hospital, two of whom were from Germany, he says, “The Germans did not have the same opportunity [as I did]. I’m sure they would have been glad to go back to Germany if they could. But hiring a plane to fly to Germany is prohibitive.”

The advent of telemedicine (the use of digital technology to diagnose patients remotely) and the emergence of companies such as MedjetAssist, which offer more than simple travel insurance, allow travelers to venture far from home confident that they can escape from misadventures with their persons—and wallets—intact and that they can receive proper medical attention should they need it.

Telemedicine provided one particular superyacht owner with peace of mind when the fear of a medical emergency threatened to sabotage his travel plans. A couple of years ago, one of Dr. Robert Darling’s colleagues at Guardian 24/7, a boutique medical service in Leesburg, Va., took a call from a middle-aged man who was vacationing with his family on their superyacht off the Atlantic coast. The man complained of chest pains and had reason to be concerned. Although he was fit, he had a family history of heart attacks and had other risk factors for coronary disease. If his symptoms were serious, he would have to tell his captain to head for the nearest port. If the chest pains turned out to be nothing more than indigestion, changing course would not be a tragedy, but it would be inconvenient. “It’s a story that happens every day in the ER, but it rarely happens on a superyacht,” Darling says of heart-attack false alarms.

Darling cofounded Guardian 24/7 in 2007, promising to provide patients with the type of medical care that the president of the United States receives. (Darling served President Bill Clinton, Hillary Rodham Clinton, and other members of the administration as a White House physician from 1996 through 1999.) Guardian has recently been purchased by White House Medical, which has annual fees starting at $50,000.

Aboard his vessel, the superyacht owner had a medical suite containing a range of equipment adapted for telemedicine, and his crew included a medical technician. “We were able to get his EKG readings as a PDF file that was transmitted to the doctor,” Darling says. After reviewing the readings, Darling’s colleague determined that the patient was not experiencing a coronary event and cleared him to continue sailing. “His vacation was not disrupted,” Darling says. “He was able to stay on the vessel with his family.”

When a medical emergency or an accident does disrupt a vacation, landing a traveler in the nearest hospital, a service such as MedjetAssist can get the patient to a preferred medical facility. “We’re AAA for the body,” says John Gobbels, the vice president and COO of MedjetAssist. “We make all the arrangements to get you to the hospital of your choice.”

Gobbels stresses that MedjetAssist, which began evolving from an air-ambulance firm into its current form in 1998, offers memberships (prices start at $260 per year for an individual and $395 for a family), not travel insurance. “We’re not sure how many members are involved in extreme sports. We don’t require them to tell us where they’re going or what they’re going to do,” Gobbels says. “There are no health questions for anyone under the age of 75. You can be a cancer patient or have high blood pressure. We don’t know.” If a member is more than 150 miles from home, has managed to get to a hospital, and is sufficiently stable to travel, MedjetAssist can shepherd that member to another medical facility, as it did for Panhuis.

However, for his initial transportation to a hospital, Panhuis had to rely on the kindness of an Australian tourist—or he could have waited for an ambulance to arrive from Whitehorse. What are known as field rescues are beyond the scope of MedjetAssist. The Boston-based firm Global Rescue is among the companies that fill this gap. It offers medical-evacuation memberships with security-evacuation upgrades; it has come to the aid of members stuck in perilous situations ranging from the Haitian earthquake in 2010 to the Arab Spring uprisings to the Fukushima disaster in Japan in 2011. The price for a yearlong individual medical membership is $329 ($655 with the security option); a yearlong family membership costs $579 ($1,155 with the security coverage).

Two years ago, the company rescued an elite mountain climber who was stuck on Kanchenjunga, a Him­alayan peak near the India–Nepal border that is the world’s third tallest. The climber could not descend any farther because she had hurt her knee in a fall, and she was experiencing snow blindness. Before the call for help, she had made it to Camp 4, which is about 24,000 feet above sea level. “I don’t know what the highest helicopter evacuation was at the time,” says Global Rescue CEO and founder Dan Richards. “I suspect that if it didn’t set the record, it was close to it, right up near the threshold of operation [for a helicopter].”

Unlike MedjetAssist’s Gobbels, who has worked as a flight nurse and paramedic, Richards does not have hands-on rescue experience; he has a finance background. From 2003 through 2004, he searched the market for a company like Global Rescue so he could invest in it. Finding no business that fit the bill, he started his own. “I discovered that the assistance companies were very good at finding lost luggage, but when the situation is more extreme—if you wanted to have the cavalry come—that was not what they did,” he says. “I’m not smart enough to answer the question of why [companies such as Global Rescue] didn’t exist. I just know that they didn’t.”

Travelers may need to summon the cavalry for less than a broken back or snow blindness. Erik McLaughlin understands this. He is the medical director and a cofounder of the Tucson, Ariz.–based Adventure Doc, an operation that provides medical personnel who accompany travelers when they venture to remote destinations. (Prices depend on the location, the length of the trip, the size of the traveling party, and whether the personnel are doctors, nurses, or paramedics.) He remembers an incident from two years ago that involved a group of three dozen British clients who had traveled to the southwestern United States for a rigorous holiday of hiking and canyoneering. However, most of the group arrived reeling from a stomach bug—vomiting, diarrhea, fever. From his office in Tucson, McLaughlin served as the medical control, or backup, for the paramedic who Adventure Doc provided to the group (for a four-figure fee, plus the paramedic’s travel costs and other expenses). “We almost ran out of IV fluids before we started the adventure,” McLaughlin says. Once the group journeyed from its starting point into the wilderness, the only means of restocking the IV bags would have been to air-drop them. “In my experience, only one out of three wouldn’t have burst,” he says.

Instead of recommending that the adventure be canceled, McLaughlin advised the paramedic as he rationed the IVs, distributed oral rehydration solution, and did what he could to keep everyone’s spirits up. “Everybody had a great time. We got a good amount of praise on that tour. We even took care of some of the guides, who got [the bug] by the end of it,” McLaughlin says. “Nobody wants to spend $25,000 on a dream vacation and spend it flat on their back in a hotel room. We saved their vacation for them.”