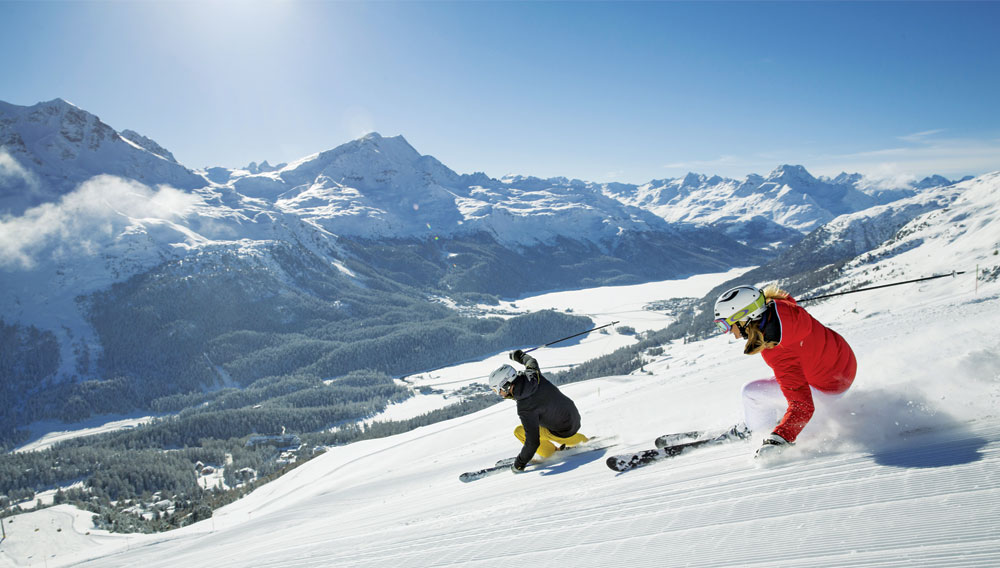 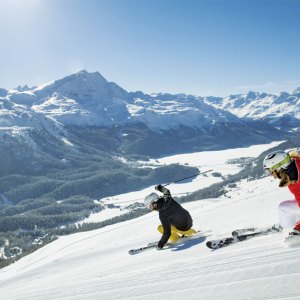 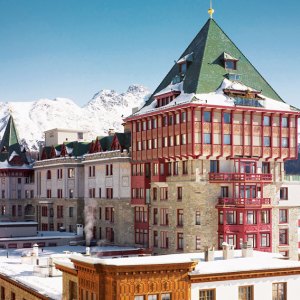 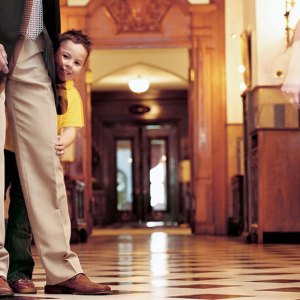 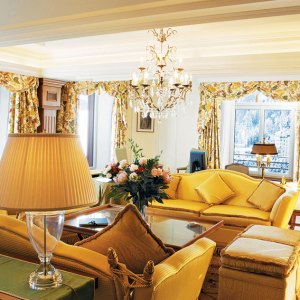 A century and a half after inventing winter tourism, the elite retreats of the Swiss Alps are perfecting it.

It has been nearly two weeks since I arrived in the Swiss Alps, and my language choices continue to be challenged on a daily basis. Yesterday in Davos, I heard only German. Today in St. Moritz, everyone is speaking Italian. In a country less than twice the size of New Jersey, four national languages—French and Romansh are the other two—make for more than the occasional linguistic blunder.

Unfazed by my misguided gesture, the driver wishes me well on the slopes of Corviglia. Minutes later, I am soaring above the Engadin valley on the Celerina gondola, looking down on the winter fairy tale that is St. Moritz. Powder-blanketed slopes descend 2,200 feet to cobblestone streets lined with boutiques by Louis Vuitton, Chanel, and Chopard. Mid-mountain, I pass diners nursing glasses of Pinot Noir and lingering over their desserts and the jaw-dropping views. My attention, however, is on a pristine stretch of off-piste terrain that I spied on the ride up. The slope proves as perfect as it appeared; like cream, the snow swishes effortlessly underneath my skis.

If the powdery peaks and winter social scene are the main attractions in the Swiss Alps, it certainly was not always this way. During the Victorian era, the concept of traveling to see snow rather than to escape it was virtually unheard of. London’s elite may have passed their summers in the crisp air of the Alps, but never their winters, which were spent in temperate seaside towns, far from any destination that might require a fur collar.

That began to change in 1864, when the Swiss hotelier Johannes Badrutt challenged a handful of his devoted summer guests from London to weather the winter in St. Moritz. If his visitors were not enamored of the soft blankets of snow enveloping every nook and cranny of the Engadin valley, he promised, their stay would be free. The wager was hardly a risk for Badrutt. Compared with London’s dreary weather, St. Moritz’s 320 days of sunshine per year were almost guaranteed to please his guests. Indeed, Badrutt’s visitors stayed long past New Year’s Day and well into spring, arriving back in London the following Easter tanned, refreshed, and ready to return the next winter.

By the beginning of the 20th century, Badrutt’s marketing stunt had spawned an industry, with his Badrutt’s Palace—opened in 1896—and a handful of other opulent hotels leading the way. In December 1912, Suvretta House debuted within a sprawling belle epoque–style mansion in St. Moritz’s forested Upper Engadin. Months later, the Carlton Hotel—rumored to be the summer palace of a Russian czar—opened its carved wooden doors to an appropriately regal clientele. Badrutt’s bet, it seemed, had paid off in the form of a buzzing winter playground for European high society.

Today, 150 years after its founder’s fateful challenge, Badrutt’s Palace remains the revered centerpiece of Swiss Alps tourism—and one of the most impeccably maintained historic hotels in the world. Loyal families continue to visit for their annual ski holidays, requesting the same rooms as in years past and expecting the same mismatched antique furnishings their ancestors sat on and slept in. Old house rules also persist: Dinner jackets, for example, are required in all public spaces after 7:30 pm. A similar devotion governs Suvretta House, where dark suits and dresses are standard in the evenings, even for children.

At the Carlton, however, the devotion of longtime guests was tested when the property undertook a $180 million transformation in the mid-2000s. The reinvented hotel, which opened in 2007, offers a dazzling combination of Murano lamps and Berluti leather–upholstered chairs alongside antique furnishings and brocade curtains. The Carlton’s rooms—once totaling 113 units with a number of entry-level accommodations—today number just 60 suites, including a three-bedroom penthouse with a terrace overlooking Lake St. Moritz. The reinvention also added a three-story spa and Da Vittorio, an Italian restaurant that earned a Michelin star this year.

Despite the many changes at the hotel, the Carlton remains true to its past—even if the truth is sometimes relative. In the hotel’s suites, connecting doors are painted with illustrations of ornate cutlery. “Those are all pieces from the czar’s private collection,” says the hotel’s general manager, Dominic Bachofen, “or at least that’s a good story.”

The story of the Swiss Alps, of course, does not end in St. Moritz. The ski town’s success as a cold-weather retreat soon spread through the peaks and valleys of Switzerland, from the Engadin to the Saanenland. In Gstaad—a cow town in the Saanenland where rolling meadows are blanketed with powder from November through April—the establishment of a railway line from Montreux in 1904 opened the door to new hotel developments that included the now-venerable Gstaad Palace and Le Grand Bellevue.

Though Gstaad is located in Switzerland’s German-speaking region, the local greeting of choice is sal-u, a derivative of the French salutation salut. The village’s German roots, however, are clearly on display in the picture-perfect chalets that line the cobblestone streets, with their gently sloping roofs and timber walls adorned with hand-painted patterns. As in St. Moritz, strict building codes have left these centuries-old structures intact.

“Here the world is still in order, almost like 100 years ago,” says Ernst Scherz, the former proprietor of Gstaad Palace. Scherz, who refers to his hotel’s lobby as “the meeting place of Gstaad,” knows well the loyalty of Swiss Alps visitors. Time and time again, he has polled his guests on the subject of changing the property’s decor; the unanimous vote is always to leave it be. Thus, Gstaad Palace’s public spaces and 104 guest rooms are fastidiously maintained to keep the historic property in its prime. And while a tie is no longer required in the evenings, many visitors still dress to be seen at dinner.

Like the Carlton in St. Moritz, however, a few of the Palace’s neighbors are daring to be different in Gstaad. In 2012, the Alpina Gstaad debuted with a striking—and decidedly modern—look by the global design firm HBA. An impressive mix of traditional and contemporary styles, the property blends reclaimed wood-beam ceilings sourced from nearby farmhouses with an eclectic art collection and silk and leather details, and features such of-the-moment amenities as a Cuban-themed cigar lounge, a Six Senses Spa, a private cinema, and a Michelin-starred restaurant. Following suit, the nearby 101-year-old Le Grand Bellevue completed a redesign in 2013 that strived for a similar balance of old and new, updating its original chalet-style architecture with colorful textiles and bespoke furnishings, and adding a spa, a cinema, and a Michelin-rated restaurant of its own.

If a slow evolution is taking place in Switzerland’s most established downhill destinations, a seismic shift is shaking things up in Andermatt. Set in the Urseren valley roughly 100 miles east of Gstaad, Andermatt was once a ski star in its own right, gliding on the prosperous coattails of its neighbors during the early 1900s. During World War II, however, the Swiss army moved into the village to take advantage of its strategic location between Milan and Zurich. By the time the military left the post in 2000, the few ski lifts and lodges that remained were hardly a match for St. Moritz.

Andermatt’s current about-face is largely the work of the Egyptian entrepreneur Samih Sawiris, who late last year debuted the Chedi Andermatt, a 105-room resort that sits at the heart of an in-progress 345-acre development called Andermatt Swiss Alps. Located on the former site of Andermatt’s Grand Hotel Bellevue, which closed in the 1970s, the Chedi is a modern leap compared to the preservation sites of St. Moritz and Gstaad.

Simply passing through the Chedi’s vast lobby—where the greeting is once again the French modification of sal-u—is enough to verify that the Jean-Michel Gathy–designed hotel is a masterpiece, or at least something completely foreign to the Swiss Alps. While timber walls and stone ceilings quietly refer to the old Bellevue, the property’s Japanese restaurant, Zen-like spa, and sleek and minimalist decor reflect the Chedi brand’s pan-Asian roots. Though slightly incongruous with their Alpine surroundings, the spaces and the guest rooms—massive retreats adorned with bespoke marble and leather furnishings—make for a simply spectacular ski palace.

Like the Andermatt Swiss Alps development, the local slopes are a work in progress. A single tram does the heavy lifting to the top of Gemsstock mountain, where the panoramic views of the growing resort town offer a glimpse of what is yet to come. Sawiris hopes to connect Gemsstock with Andermatt’s two other ski areas, adding seven new lifts, new snowmaking facilities, and mid-mountain dining by 2017. Plans for the town are equally ambitious, including 25 custom chalets, 450 apartments, and après-ski experiences on a par with those of St. Moritz and Gstaad.

For now, at least, the crowds appear to come for one thing only: the skiing. At the top of Gemsstock, the snow is perfectly light and dry. I wait for the throngs to thin out before positioning myself above Sonnenpiste, a red run with a scenic route. Before me stretches the treeless landscape of the Urseren valley, where the silent rocky mountains seem to continue on forever, with no end in sight.

In addition to St. Moritz, Gstaad, and Andermatt, resort towns such as Crans-Montana and Davos offer a classic Swiss Alps skiing experience, one that is best enjoyed based at these new or recently renovated hotels.

Just southeast of Gstaad in Crans-Montana, this Alp-shaped chalet was the place to be during its zenith in the 1970s and ’80s. In 2013, the ski-in/ski-out hotel reopened with a modernized look featuring an impressive glass addition that overlooks the slopes. Contemporary après-ski comforts include a subterranean spa and a cozy Swiss Stübli. +41.27.485.48.48, cransambassador.ch

This 5-year-old boutique hotel is an intimate addition to Crans-Montana, with an indoor swimming pool, a spa, and a cigar lounge. Each of the 15 rooms is named for a different mountain, from Everest to Kilimanjaro. The cuisine at LeMontblanc restaurant is served with stunning views of its namesake peak. +41.27.486.60.60, lecrans.ch