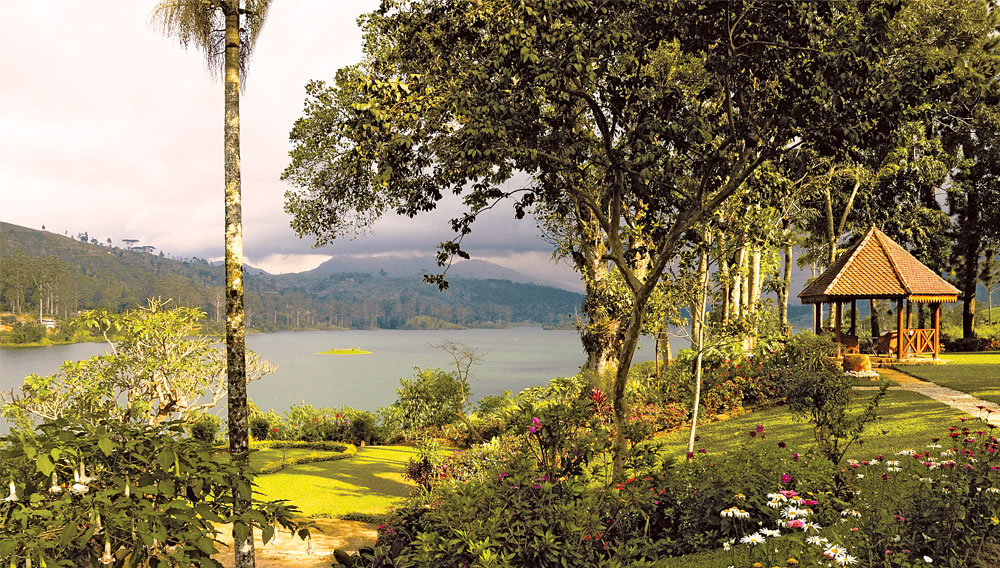 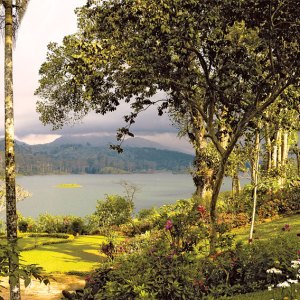 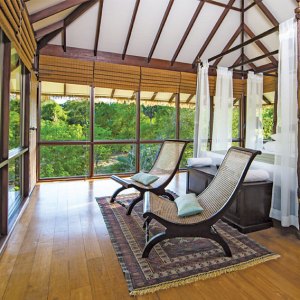 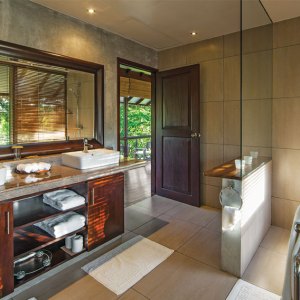 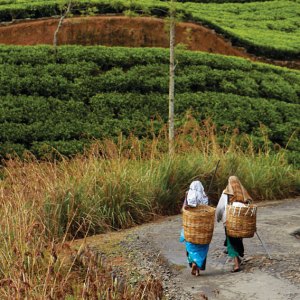 The GippsAero GA8 Airvan floats nimbly through the clouds, sweeping over the paddies and craggy mountains of the Sri Lankan countryside. Traveling north from the island nation’s seaside metropolis of Colombo to its famed Cultural Triangle, the aircraft soars past Adam’s Peak—a jagged, cone-shaped mountain whose footprint-like indentations have for centuries prompted holy pilgrimages—then veers toward the tangled green hills of the northern steppes.

Suren Mirchandani, the founder of the Sri Lankan private-aviation company Simplifly, has taken me 20,000 feet above the ground to prove a point. “Seven years ago, I realized tourism’s potential here was in the air,” he says as the changing scenery slips past us in a few heartbeats. Having visited Sri Lanka in the past, I know that this idyllic landscape often unfolds slowly and uncomfortably on the ground, a travel experience marred by variable roads and other remnants of the country’s checkered past.

My previous visits to the island—one in 2005, a few months after a devastating tsunami ravaged the country, and a second in 2008, during a flare-up of domestic violence—had been disappointing, to say the least. On the occasion of the latter, my Cathay Pacific flight arrived at Bandaranaike International Airport just as an attack by the Liberation Tigers of Tamil Eelam (LTTE) hit nearby Colombo. At the time, the country was less than a year away from ending its 26-year civil war between the LTTE and the ruling Sinhalese. But on this trip, gunfire on the only road into the city left me stranded and fearful. Canceling my stay, I bribed a machine-gun-toting soldier to help me buy the next plane ticket out of town, and then spent the next 12 hours eating stale cookies and attempting to wiggle into a sleeping position on an airport windowsill.

The Sinhalese government defeated the LTTE in 2009, and, as I am quickly learning, much has changed for tourists in the subsequent years. Many of these changes, however, started taking shape much earlier, thanks to visionaries like Mirchandani. “Exceptional hotels opened even during the worst years of the war,” he explains as we fly over Heritance Kandalama, an eco-resort opened in 1994 that is built into the side of a rocky cliff. “But long drives kept people away at least as much as the fighting.”

Miguel Cunat, a cofounder and the CEO of the travel agency Sri Lanka in Style, is another of the island’s tourism pioneers. After visiting Sri Lanka in 2002 for his honeymoon, the Spanish entrepreneur “fell in love with the country, too.” Realizing Sri Lanka held tourism potential for more than just intrepid backpackers and Buddhist pilgrims, Cunat launched his agency in 2005, amid the country’s long-standing unrest.

“Back then we felt certain the war would continue for a very long time,” says Cunat, who is escorting me on my trip north. “I became skilled at answering the question, ‘Is it safe?’ To show Sri Lanka at its best, we first needed to get people off the ground.”

Moments later, we touch down on a former military airfield. (“The war that impeded our operations now facilitates it,” Mirchandani says.) Stepping off the aircraft onto the flat, emerald plain, I am not sure which takes my breath away more: the 5th-century rock-fortress capital of Sigiriya, protruding from the horizon like a thumb, or the speed at which we have arrived—less than an hour after takeoff, or about one-fifth the time it would take on the bumpy roads.

Cunat and I continue 45 minutes by road to Ulagalla, a 20-villa resort spread across a 58-acre nature preserve near Wilpattu National Park. Home to leopards and sloth bears, the park reopened in 2004 after nearly 16 years of closures caused by safety concerns. Before Ulagalla, which debuted in 2010, the region lacked anything in the way of luxury accommodations, forcing Cunat’s clients to rush from site to site on day trips. But today, as a buggy driver escorts me to my villa, the mood is unhurried, with stops along the way to observe three monkeys swinging in the trees overhead and a delightfully prehistoric monitor lizard crossing our path. The jungle surroundings are on display through floor-to-ceiling windows in my villa, which is outfitted with colonial furnishings and a four-poster bed.

The next morning, tropical rains preclude my sunrise plans for bird-watching. Instead, Cunat introduces me to Charitha Pathirana, a local guide who takes me about 20 miles north of Ulagalla to Anuradhapura, a sacred city filled with nearly 2,000-year-old ruins. Charitha and I spend the day visiting the city’s sights, which include the Jetavanaramaya stupa (built by Sri Lanka’s king Mahasena at the end of the 3rd century), Abhayagiri Dagaba (a massive domed monastery erected in the 1st century BC), and the Bodhi Tree (one of the world’s oldest known trees, and one of the most revered sites in Buddhism).

Almost as quickly as I arrived, however, I find myself back in the air, this time taking off from Ulagalla’s helipad in a zippy Bell 206 JetRanger. Whizzing past the tiny, slivered roads below, I am again relieved to be skipping the drive—what in this case would be an eight-hour ordeal. Instead, an hour later, we land in the Bogawantalawa Valley, Sri Lanka’s tea region in the central province, to visit the country’s best-known tea purveyor, Dilmah.

Ten years ago, Cunat explored this valley on a motorcycle, using old military maps to search the velvety green landscapes for an ideal resort location. Along the way, he discovered the four planters’ bungalows, built between 1890 and 1939, that today make up the Dilmah-owned Ceylon Tea Trails resort. Eclectic and charming, the four villas are decorated with period antiques and cane furnishings, and each features its own spring-fed swimming pool. From Castlereagh, my circa-1920s bungalow, views of the nearby tea hills draw me to the resort’s winding foot trails, where a leisurely stroll affords glimpses of leaf pickers tending their fragrant harvest.

Tea is naturally on my itinerary, and Cunat has arranged a rare private tasting with Merrill Fernando, the 84-year-old founder of Dilmah. Over cups of handpicked Watte Single Estate Tea (laid out before us by the resort’s Swiss-trained staff), Fernando compares his “liquid gold” to fine wine. Even my unrefined palate notes the diversity of tastes among the leaves, which I learn contain more antioxidants than my usual green tea. My education, however, ends prematurely—we have another helicopter to catch. Stashing some loose white-tea leaves in my bag, I bid Fernando farewell and board the JetRanger for Yala National Park on Sri Lanka’s southern coast.

“Don’t worry,” Noel Rodrigo, owner of Yala National Park’s Leopard Safaris camp, tells me hopefully. Somewhere along the road between Yala’s entrance and Rodrigo’s campsite, my suitcase has gone missing. Our safari Jeep was bouncing along a dirt pathway surrounded by scrub jungle and thorny grasslands that are home to one of the world’s largest leopard populations. Captivated by Rodrigo’s tales of the 378-square-mile sanctuary’s inhabitants, I neglected to notice my Tumi roll off the back of the vehicle. Rodrigo suspects my luggage may have made a splash landing during a river crossing.

Indeed, accessing Yala National Park—and many other alluring attractions in Sri Lanka—still requires a bumpy ride on a rudimentary road. Even with the advances in tourism and transportation, casualties such as this are to be expected. This time, however, fate proves sympathetic: Several hours later, after I have gorged myself on a bounty of barbecued Negumbo prawns and pork chops, two guides return from a game drive, triumphantly carrying my suitcase. Relieved, I retire to my tent—a modest canvas accommodation with a king-size bed, solar-powered lighting, and a separate private

My rest is nothing if not short, as the next morning begins in darkness. Rodrigo has convinced me that the best leopard sightings occur before dusk and dawn—and before the other tourists arrive—so we rise at an ungodly hour to reach the national park’s entrance ahead of the other Jeeps.

“The jungle gives you so many clues,” Rodrigo says as we zoom through the empty park. “With experience you know if a paw print is—”

“Do you hear that?” he whispers. “Deer alarm calls. There’s a leopard just beyond that fence.”

Rodrigo pushes harder on the gas pedal. “Be like a statue if we see him,” he says excitedly. “The first few seconds are crucial so we don’t scare him off.”

Fear does not belong to the first animal we see, but instead to me—upon catching sight of a large tusker elephant in our Jeep’s path. Only five percent of male Asian elephants in Sri Lanka have tusks, and this one, Rodrigo says, “is a bit angry with us.” As if confirming the observation, the massive pachyderm charges, heading straight toward our vehicle until we are face-to-trunk. Silence once again ensues, this time magnified by my choked breath and thumping heart.

Adequately convinced of his dominance, our challenger passes by, leaving us to track a fresh set of leopard paw prints in the moist dirt. The day produces multiple leopard sightings (Rodrigo estimates that about 95 percent of his guests see the big cats), as well as encounters with crocodiles and painted storks in low-lying lakes; camouflaged elephants feeding quietly among the tropical shrubbery; and groups of spotted deer prancing alongside our vehicle long after we have driven out of the park gates.

Leaving Yala for Sri Lanka’s southern tip, I brace myself for the washed-out roads lined with refugee camps that I remember from my visit in 2005. I had come to the tsunami-ravaged island to report on the promise of tourism as a means of recovery, but I encountered little to support that notion. Instead, makeshift shantytowns and roadside signboards that read “Where are you God?” and “Donated by the Red Crescent of Saudi Arabia” only seemed to underscore the country’s desperate situation.

This coastal drive, however, is a revelation. One beach hotel after another, many still under construction or recently completed, line the highway. Along the palm-fringed beaches of Tangalle, I arrive at Amanwella, the 30-suite Amanresorts property whose 2005 opening was overshadowed in the aftermath of the tsunami. Renovated in 2012 by the Singapore-based firm Kerry Hill Architects (which also designed Amangalla in nearby Galle), Amanwella is now one of the chain’s most profitable outposts. In the resort’s suites, Aman’s trademark minimalist decor encompasses neutral fabrics, fantail coconut-wood furniture, and floor-to-ceiling windows affording uninterrupted views of the sea. Guests linger over cocktails in the chic, geometric lounge before wandering to the outdoor dining room, where local and Mediterranean dishes are served to a soundtrack of crashing waves.

I rise the next morning just after sunrise, eager to plunge into the 150-foot-long pool that was new—and somewhat off-limits—during my last visit. At the time, I was asked to wait until dark to dive in, out of respect for the locals finishing construction around the property. This morning, I slip on my swimsuit and head out into the bright glow of the sun.

“You’re almost too late,” the pool attendant says as I scan the terrace for a padded lounger. Indeed, the pool is lively, with nearly every spot occupied by a chic guest in a stylish swimsuit and wide-brimmed hat. Following the attendant to the last available perch on the deck, I realize that, at last, I have made it to Sri Lanka right on time.