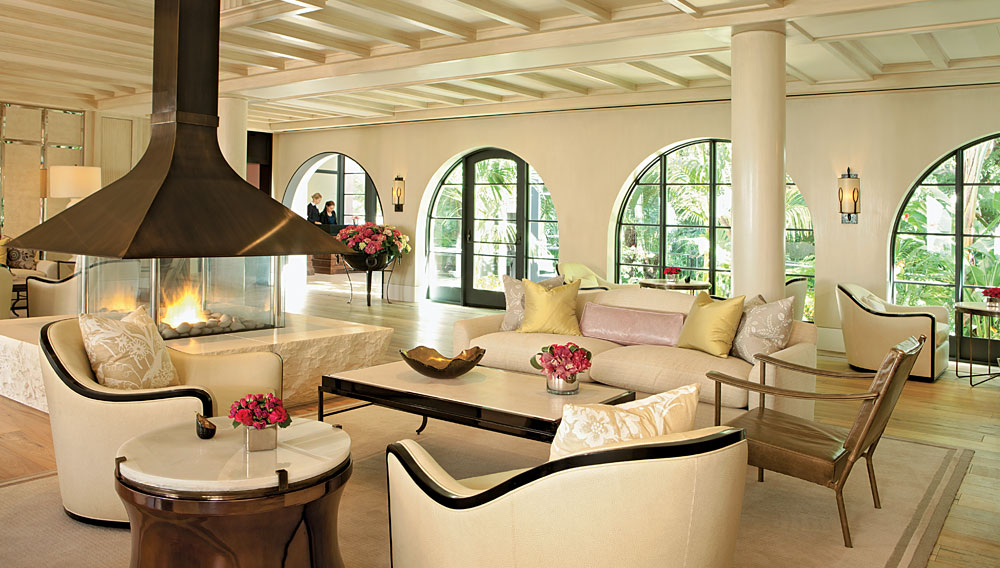 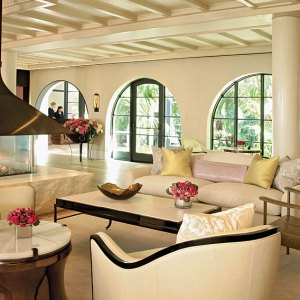 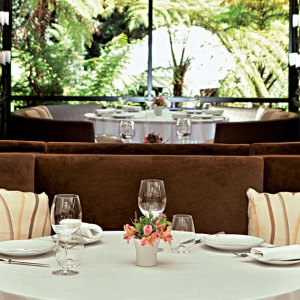 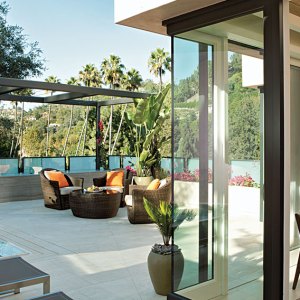 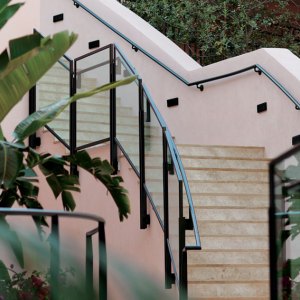 The original residents of 701 Stone Canyon Road—one of Los Angeles’ most enviable addresses—did not have their names emblazoned on movie-theater marquees or spelled out in wrought-iron filigree above the main gates of motion-picture studios; they did, however, have well-heeled hooves. These equine tenants enjoyed their bosky surroundings courtesy of Alphonzo E. Bell Sr., an oilman turned real estate developer who, in 1922, acquired more than 600 acres in the foothills west of Beverly Hills that he christened Bel-Air Estates. The exclusive residential community offered a tranquil retreat beyond the reach of urban sprawl, and many of the luminaries who purchased lots there housed their horses at the riding stables Bell built adjacent to his development offices. Yet this equestrian haven did not last: The horses’ quarters gave way to more inviting accommodations when Bell sold the parcel to Joseph Drown, a Texas hotelier who sought to build a resort in the style of a country estate.

Opened in 1946, the Hotel Bel-Air incorporated the mission-style buildings that once served as Bell’s offices; yet their arches, arcades, and towering mirador brought the grounds’ gardens and swan-filled lake indoors, making them ideal accoutrements to the Mediterranean setting Drown envisioned. The hotel’s remote locale appealed to guests, and soon the Bel-Air—and, in particular, its famed bar—became a refuge of cel­ebrities, such as Bette Davis, Humphrey Bogart, Grace Kelly, Gary Cooper, and Marlene Dietrich; and its private cabanas served as the mise-en-scène for innumerable Hollywood assignations.

Because of the hotel’s unique place in local lore, Angelenos viewed the property’s recent two-year, $100-?million renovation by its current owner, the Dorchester Group, with a mix of anticipation and trepidation. During that interlude, the Bel-Air was closed; its venerable trees and lush plantings were uprooted and removed in planters, and its colony of swans was temporarily relocated, while the new owner built a hillside structure containing 12 new suites with canyon views and a 12,000-square-foot La Prairie spa facility with three loft guest rooms installed on the floor above it.

The hacienda-like exteriors in their signature shade of pale flamingo pink remain intact, but gone is the traditional décor that had been largely untouched since hotel regular Nancy Reagan presided as First Lady at the White House. Designers Alexandra Champilaud, who transformed the lobby and the guest lodgings, and David Rockwell, whose firm, the Rockwell Group, was responsible for the dining and entertainment spaces, brought their own, more contemporary interpretations of Art Deco and Hollywood Regency glamour to the interiors. The lobby is streamlined, and the restaurant, now run by Wolfgang Puck, offers expanded outdoor seating. Loyalists, however, will be pleased to know that the beloved wood-paneled bar—though sleeker and now in a graphite color—retains its famous fireplace and opens onto the hotel’s central feature, its gardens, which have been so meticulously replanted that one would never guess a single blade of grass was ever removed. Hotel Bel-Air, www.hotelbelair.com