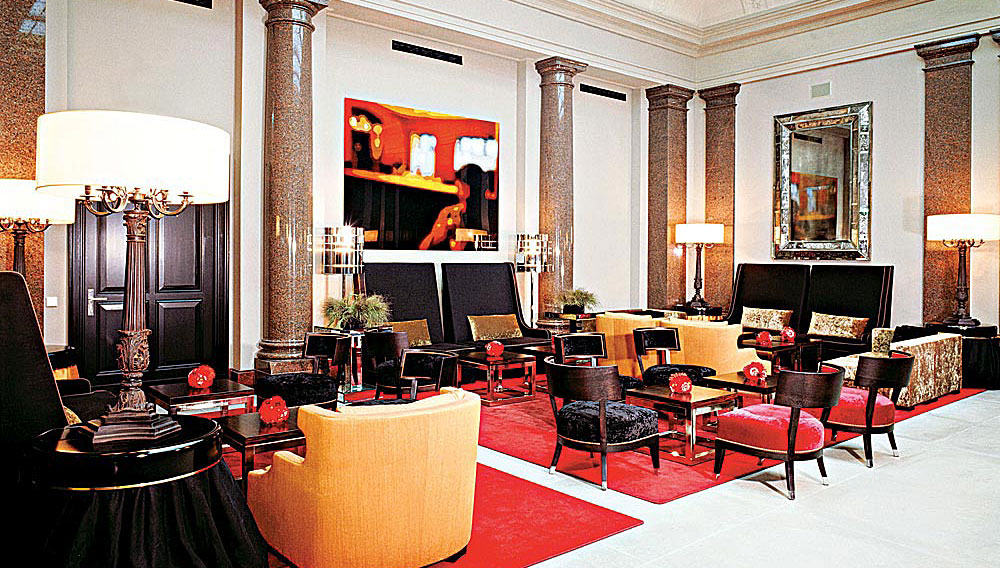 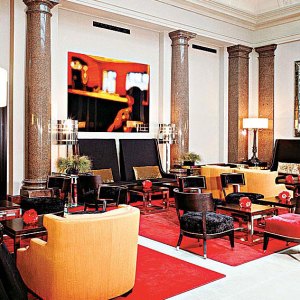 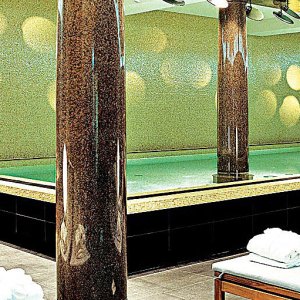 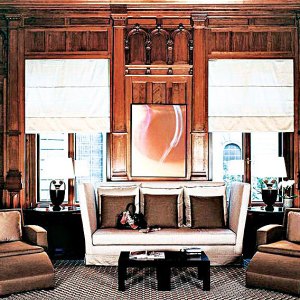 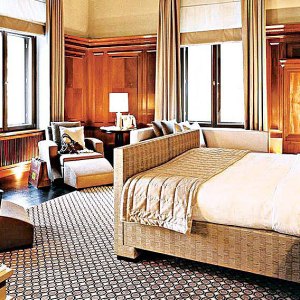 In the late 1880s, Dresdner Bank AG, one of Germany’s Big Three financial institutions, moved its headquarters from Dresden to a new building built by master architect Ludwig Heim in Berlin. Rich wood paneling and 13-foot-high ceilings marked the expansive corner offices of the bank, which closed after bombings during World War II ravaged the neighboring palaces and museums along Berlin’s Unter den Linden. The city’s central promenade gradually has been rebuilt, and, last October, Dresdner Bank’s former headquarters opened as the Hotel de Rome. Though the de Rome retains elements from the prewar bank building, the hotel is anything but staid. Heim’s palazzo-style architecture—high ceilings, long corridors, glass roofs, cast-iron staircases—mixes with contemporary furnishings in bold shades of red and gold. Downstairs, in the bank’s former vault, a mosaic-tiled pool pulses and shimmers. Surrounded by golden walls and marble columns, the tranquil space reflects a time when the room housed the precious jewels of Berlin aristocracy. The hotel is within walking distance of the city’s Museum Island and the State Opera House. Following an evening stroll, you can take a detour to the de Rome’s Bebel Bar for creative cocktails or to the hotel’s roof terrace—a rarity in Berlin—for Champagne and magnificent views of the reconstructed Brandenburg Gate. Accommodations The 146 guest rooms include 45 suites, some of which occupy the former offices of Dresdner Bank’s directors. Dining Parioli restaurant serves the Italian cuisine of Michelin-starred chef Raffaele Cannizzaro. Try the Opera Court for light fare, Champagne, and afternoon tea, and Bebel Bar for cocktails. Facilities A spa with six treatment rooms, a Finnish sauna, a steam bath, and a 65-foot-long mosaic-tiled pool. Five conference rooms and the Palm Court Ballroom accommodate meetings and events. Concierge Recommends An afternoon browsing the Pergamon Museum’s Münz-kabinett (coin cabinet), a collection of approximately 500,000 coins and other monetary items that date as far back as the seventh century B.C. Rates Standard rooms from $600, junior suites from $1,115, deluxe suites from $2,225, and the presidential suite from $7,115.