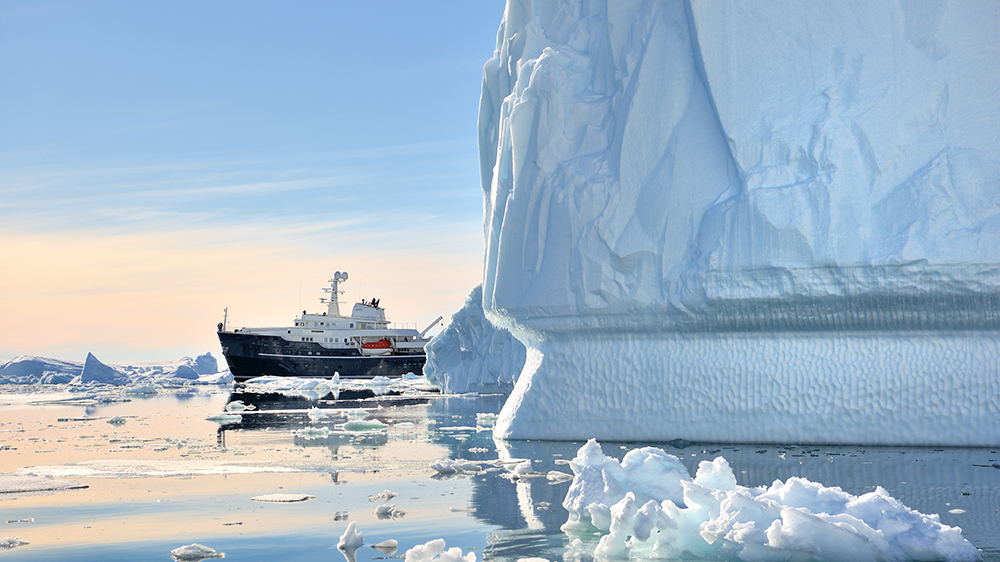 There’s a new way to play. The world’s most intrepid adventurers are no longer content to join the masses on a hike to Machu Picchu or a dive to the Great Barrier Reef. Instead, they’re hacking together epic toys that can go farther, faster, higher, and deeper than anything else. From a monster icebreaker that can crash through ’bergs to a souped-up submersible designed for the deepest dives, these custom crafts are going above, beyond, and all the way.

The Soviet-era icebreaker was in a sorry state when Jan Verkerk first laid eyes on it. The 254-foot commercial vessel was as fashionable as you’d expect coming out of Cold War Russia—baroque, colonial, and covered in mahogany—but the CEO of the Netherlands’ Unlimited Yacht Charter saw potential in it to fulfill a master plan. “I wanted to make a perfect boat for every type of expedition imaginable,” Verkerk says. So, he set about building Legend, a rare vessel that can break through the glaciers of Greenland just as easily as it can rub bows with oligarchs’ yachts in the Bahamas.

It took three years, but Verkerk, along with designer Thom Beerens, managed to transform the old junker into a sort of seafaring Frankenstein: a luxurious superyacht brimming with excess, but built from the steel bones of a Class 1 ice-breaking beast. Customized for extreme conditions, with a specialized hull, heating systems, propellers, and water-tide doors, the ship is outfitted with an arsenal of expeditionary toys—WaveRunnners, a helicopter, and a U-Boat Worx submarine among them. It has already made its fair share of adventures (and misadventures), sailing south across the Drake Passage—a hairy journey by Verkerk’s account—to Antarctica for hikes to the top of unnamed mountains and north to Greenland for heli-skiing conquests down more unnamed mountains. Navigating through the icebergs of Disco Bay, on the western coast of Greenland, is a particularly vivid memory for Verkerk. Surrounded by peaks and behemoth blocks of ice was a true test of Legend’s navigating capabilities that the owner describes as “scary.”

But Verkerk’s creation—which he charters through Cookson Adventures and Camper & Nicholsons whenever he’s not on his own quests—is as much amusement as it is machine. After long days exploring ice fields, chasing whales, and summiting peaks, Legend becomes an indulgence, with a heated swimming pool, a Balinese spa, and a whiskey and cigar bar that Verkerk says is his post-adventure headquarters. “Out there, you quickly find that the telephone only sometimes works, and the internet occasionally,” he says. “So the only thing left is to talk to each other.”

A-List Access: Legend is available to charter; speak to Nick Davies at Cookson Adventures to discuss where you’d like to take it.

When the sea freezes over in the Swedish Lapland, and the temperatures drop to a brutal minus 35 degrees Fahrenheit, Göran Widén doesn’t stay in. He takes to his hovercraft. Built by Ivanoff Hovercraft AB, the amphibious vehicle is a toy for every terrain: mud, ice, water, and beyond. It glides, as Widén says, “like a bar of soap on a marble floor,” over heavy snow pack and ice-patched rivers, from island to island. With it, he travels miles into the wilderness to a red-roofed fishing hut warmed by fires and lamps. “We bring a big frying pan and fry some reindeer or freshly caught salmon washed down with some lingonberry juice,” he says.

It’s a somewhat humorous juxtaposition—age-old Swedish pastimes and cutting-edge hovercraft technology—but one that Widén maneuvers well, donning big boots, a furry hat, and a snowsuit on his expeditions. And speaking of maneuvers, navigating the six-passenger craft takes plenty of practice. Its twin four-stroke engines get it up to 35 mph flat out, something that makes its lack of a brake all the more vexing. (To slow down and stop requires well-trained oppositional steering.) The ride of course has its thrills—the sensation of practically flying being one of them—but for Widén, access to the ends of the Lapland is the real high. “In wintertime the Sami people bring their reindeer to the coastland, and there are seals and sea eagles, too,” he says. “There is an enchanting emptiness to the open spaces, and the feeling of being very small.”

A-List Access: Drop Widén a line at goran.widen@brandokonferens.se to glide with him on his next Lapland voyage.

The Spitfire already has a legend of its own. The World War II–era combat airplane—fast, agile, and powered by a single engine—is best known as the tenacious Nazi-killer that saved England in 1940’s Battle of Britain. But the little plane might soon have another story to tell thanks to a pair of enthusiastic (and some might say a little crazy) aircraft junkies.

British adventurers Matt Jones and Steve Brooks purchased their silver Spitfire Mark IX in 2010 with the idea of opening the world’s first Spitfire pilot-training school. But it wasn’t long before the daring pair started to think bigger. They pondered a flight to Africa in the tiny two-seater—but why stop there? So, next year, they’ll be the first to take a Spitfire around the world, soaring from England over the U.S., across the Bering Strait, over Japan and China, and back home via the Middle East and North Africa.

To say that the journey will not be without obstacles is an understatement. But for Jones (a seasoned commercial pilot) and Brooks (a helicopter pilot still honing his Spitfire skills), the allure is in the challenge. One of just 50 Spitfires left in the world, the Mark IX is a fickle creature, demanding more than $100,000 in annual maintenance and possessing a range of just 434 miles in a single go (hence the land-tethered route). And then there’s the issue of flying it. “It is very hard to fly Spitfires,” Jones says. “There is a third wheel at the rear [to support the engine], and this has a hugely destabilizing effect on the ground. It makes it a tricky thing to get the plane in the air.” Adding to the risk is that fact that you literally can’t see past the nose, which is angled higher than the windshield to allow the propellers to clear the ground, while taking off.

Yet this white-knuckle-inducing beginning is a small price to pay. Logistics notwithstanding—the duo is currently securing permission from the Chinese government to fly over the Great Wall—the historic flight is poised to be the makings of another legend for the trusty Spitfire. “Emotionally, the Spitfire is an icon of freedom for our nation,” Jones says. “There were a group of people prepared to pay the ultimate sacrifice for democracy, and to have any part in remembering those people is huge.”

A-List Access: Ready to fly on your own? Get your Spitfire pilot training by enrolling at Jones and Brooks’s Boultbee Flight Academy.

Victor Vescovo had a mission: to travel to the deepest point of the earth. But in order to achieve it, he first required a means. So, he called Triton Submarines and placed an order for the king of subs, capable of dipping nearly seven miles beneath the surface of the ocean. But there was a problem: It hadn’t been invented yet.

But as luck would have it, engineers at Triton had been toying with the idea of such a machine. Dubbed the 36000/2, it would require the development of technology as yet uninvented, not to mention a whole lot of money. Vescovo’s interest—and funds—were just the impetus to finally make it happen. What followed was three years of development, including building two dedicated chambers in order to analyze each new component’s performance under extreme pressure.

In October, Vescovo finally had in his possession the only vessel of its kind capable of reaching full-ocean depths. Predictably, he immediately put it to work, taking it on test dives in the Bahamas, undergoing simulations with Triton’s slate of pilots, and plotting his Five Deeps Expedition, a mission to descend to the bottom of each of the world’s five oceans, starting with the 5.3-mile-deep Puerto Rican Trench.

Despite its sensational title, Vescovo’s expedition isn’t about bragging rights (well, not entirely). It’s about exploring a world that, for most, remains a dark mystery. “It’s completely black down there once you dive past 3,000 feet,” he says, noting that the farther you go, the weirder it gets. “Depths past 16,000 feet are like the Himalayas—but in reverse. Life is much more specialized, exotic, and the terrain a touch more sterile. But to me, it is no less beautiful or intriguing.”

If all goes according to plan, the undersea adventurer will eventually make his way to the planet’s deepest point: the 36,000-foot Mariana Trench. There, Vescovo anticipates plenty of unknowns, and maybe even a landmark discovery. Not to worry, though, he says, “if we find a canyon or other area that might be deeper, the sub can handle it.”

Every winter, a sea of 24-hour darkness envelops the Norwegian archipelago of Svalbard. But on some days, that all-encompassing black is punctured by a small but mighty light. It’s not the aurora borealis; it’s the headlamps of Tore Hoem’s snowcat. Custom made from a Volvo FL6, and based on a military model of the industrial track-laying truck, the Scandinavian Terrain Vehicles TL6 can go almost anywhere: up steep mountains, across thick mounds of snow, and to the farthest reaches of the Arctic. But while most snowcats in these parts are used for trail grooming and snow plowing, Hoem uses his for exploration.

“Driving a snowcat makes you feel unstoppable,” says the native Norwegian, who takes his TL6 on expeditions through his travel company Hurtigruten Svalbard. “It immerses you in wildlife. We see Svalbard reindeer and the Northern lights. It is a really amazing experience to witness, and it is totally unpredictable. You cannot order it.”

Navigating the TL6 is “like driving a normal truck—but very powerful.” That power can take Hoem deeper into the Arctic landscapes than anything else, to search for icicles on the Longyearbyen Glacier and trek through ice caves carved into snow crevasses—all in the pitch-black of wintery Svalbard. “The darkness makes everything more atmospheric,” Hoem says. “And with the polar bears, you are always looking over your shoulder. It’s like being inside an ice world.”