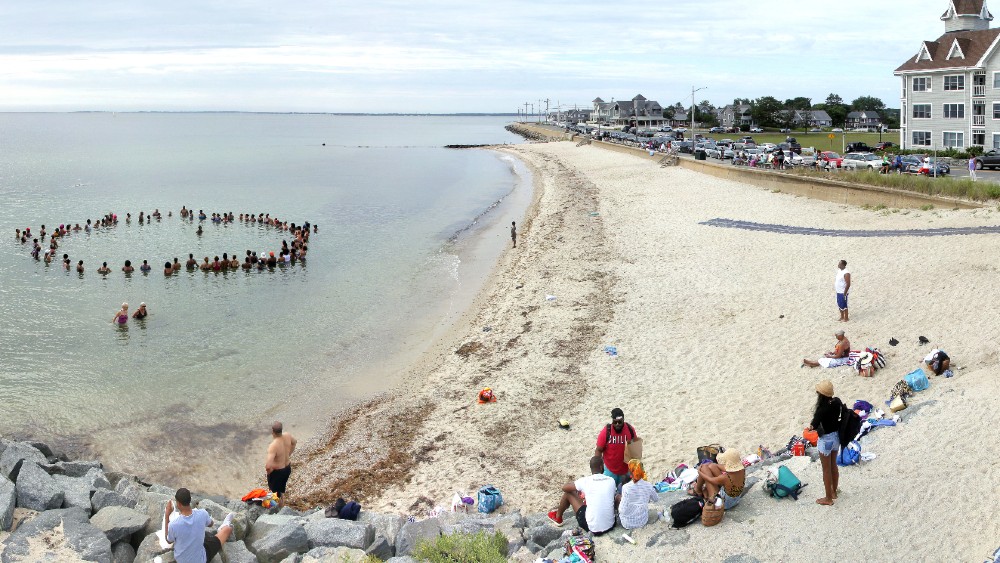 Young children meet along Inkwell Beach and play together in the warm ocean spray. Soon after, their respective families become acquainted—and so begins a cherished summertime tradition.

In the Oak Bluffs area of Martha’s Vineyard, the Inkwell, as it’s fondly known, has long been a summer destination for Black families; the area was even listed in The Negro Motorist Green Book, a travel guide for vacation-bound African-American families popular from the ‘40s to ‘60s. It remains a favorite still today, and showcases a refreshing alternative narrative to the Black experience often depicted in mainstream media. Here, you’ll find Black travelers returning to a summertime haven generation after generation and forging bonds with one another.

In recent decades, Martha’s Vineyard (and more specifically, Oak Bluffs) has also become known as a preferred getaway for the Black elite, with many prominent members of the community—from the late Maya Angelou and Oprah to Spike Lee and the Obamas—vacationing or buying homes here. Hollywood celebs such as Regina King and Jennifer Hudson have attended the annual Martha’s Vineyard African-American Film Festival, now in its 22nd year. In popular culture, meanwhile, the destination has been showcased as a hub for wealthy Black families in movies such as The Wedding (starring Halle Berry) and Jumping the Broom (with Angela Bassett), and in TV shows like ABC’s Our Kind of People, produced by Lee Daniels.

Today’s thriving community has its roots in the fact that the island has long been considered a safe and welcoming place for vacationing Black families. But it’s hard to pinpoint what precisely makes it feel this way. Maybe it’s in part because Massachusetts was the first state to abolish slavery, or because of its isolated geography as an island, surmises Skip Finley, a prominent author, historian and former broadcasting executive and long time island resident.

“You can live your life here,” Finley remarks. “You can forget all those other characterizations. You don’t need that armor here on Martha’s Vineyard. Over in the rest of America, walking around the streets, making purchases, you have to be cognizant of fact that you’re Black. If you like fishing and you come to Martha’s Vineyard and you’re Black, that’s not going to be an issue.”

The first Blacks to arrive to Martha’s Vineyard were actually indentured servants, whalers and domestic workers. On their days off, the women would come together in the enclave of Oak Bluffs, where some families eventually bought property when they could afford it. With each summer, more Blacks, from Boston, New York and other areas, began coming during the seasonal holidays.

Known as gingerbread houses for their colorful and pastel-hued exteriors, some of these historic homes in Oak Bluffs now operate as bed-and-breakfast-style inns, including the 10-room Oak Bluffs Inn and 14-room Narragansett House. The latter, operated by a family that’s been summering here across the generations, celebrates its multi-cultural, multi-racial heritage by hosting events such as “musical sundowners” and a series of “Inkwell Talks” led by noted authors, national magazine editors and prominent locals.

You’ll find more of these historic homes—like the Shearer Cottage, Dorothy West Home and Land Ladies—included on the Martha’s Vineyard African-American Heritage Trail, which comprises 35 sites of historic significance on the island that can be toured as a half-day excursion. The trail was started in 1998 by Dr. Elaine Weintraub, a history teacher, and Carrie Camillo Tankard, who both also worked to introduce more history about people of color at schools on Martha’s Vineyard.

In recent years, the duo has seen more interest in the trail from all communities, not only African-Americans, notes Camillo Tankard, who has lived on the island since 1967. “I wanted to leave a legacy for my children,” she adds, explaining the drive to research and create the trail. “There are many tours; people want to see the Kennedys’ properties. We feel it’s important to see the areas where Black people made contributions on the island, too.” (Reinforcing its historical significance, the community of Oak Bluffs is also recognized in a permanent exhibition titled “Power of Place” at the National Museum of African American History and Culture in Washington, DC.)

A multi-generational family gathering on the beach  By D. Welch

MV Escapes, a BIPOC-owned business specializing in concierge and event planning services, has also seen interest grow from a wide array of clients for everything from home rentals to private tours. For their clients, MV Escapes can arrange activities such as horseback riding and golf lessons, as well as help find the perfect vacation rental or coordinate a wedding or corporate retreat.

Co-founder Carol Bliss Furr agrees that the welcoming vibe is a major draw for locals and visitors. “We’ve had clients tell us they’ve never seen this type of environment,” she says. “Everyone comes, and everyone feels they can be a part of it.” Furr, who grew up coming to the island and then continued to bring her own kids, has been a year-round resident now for 11 years and counting. “It’s a safe place. It’s a place where kids can go and explore without feeling threatened by the outer world. They make lifelong friends.”

Furr confirms that the Inkwell is not to be missed, but one of her other picks for first time visitors is Chapoquoit Beach, known to locals as Chappy, located just across the Sound on the mainland. Back on the island, don’t miss the beautiful Mytoi Japanese-style gardens, she notes, plus high-end boutique Ethos for one of a kind women’s wear and BIPOC-owned C’est La Vie for gifts.

General manager Scott Little of Edgartown’s 117-room Harbor View hotel—a spot the Obamas are known to frequent that’s set in a recently renovated historic Victorian property—echoes a similar sentiment about the island. “The vast majority of people who come to Martha’s Vineyard, of all nationalities and colors, come because it’s a destination where they feel comfortable and that’s proactively welcoming,” Little says. “People don’t value riches here; they value privacy and non-judgment.”

Case in point: owners of Lennox & Harvey, Eric Coles and Mark Chung, who had been coming to the island during the summer for some 25 years. They finally moved here in 2017 and opened their highly curated modern take on a general store in nearby Vineyard Haven. Named after their grandfathers, who were creatives and design-minded in their own right, the much-buzzed-about store stocks men’s and women’s wear alongside finds like Japanese ikat fabric-woven wallets, Izipizi sunglasses and Alessi picnic baskets.

Once they moved to the island full-time, Coles and Chung realized how tight knit it truly is. “It consists of a really strong community that looks out for each other in a way that only small towns, or certain neighborhoods within big cities, seem to do,” Coles shares.

To get a feel for that inclusive atmosphere, Coles and Chung suggest heading to one of their own favorites, Outermost Inn. “The island isn’t about formality, but the most ‘formal’ of all the restaurants would be Outermost Inn, not in the traditional sense but in that it’s often a special occasion restaurant,” Coles says. “It’s located at the most western point and the most remote part of the island in Aquinnah, formerly known as Gay Head.  Since it’s so far out for most people on the island, it’s generally a place to go to celebrate something. The view overlooking the ocean is spectacular, so go in time to see the sunset.”

Some of their other suggestions include Le Toile for classic French fare; Grey Barn & Farm, which offers cheese and charcuterie tastings in a beautifully restored barn; and Knowhere Gallery, in Oak Bluffs, for contemporary art. More art can be found at the Michael Johnson Photo Gallery, where Harlem-born photographer Johnson, who spends half the year on the island, showcases his signature photos of Inkwell Beach and its regular “polar bear” swimmers. One shot in particular stands out: a beautiful black-and-white image of a group of these intrepid swimmers in the water, their hands raised in the air. It’s an encapsulation of what Coles describes as the “overall feeling of joy” of being here—the same feeling that keeps visitors coming back.