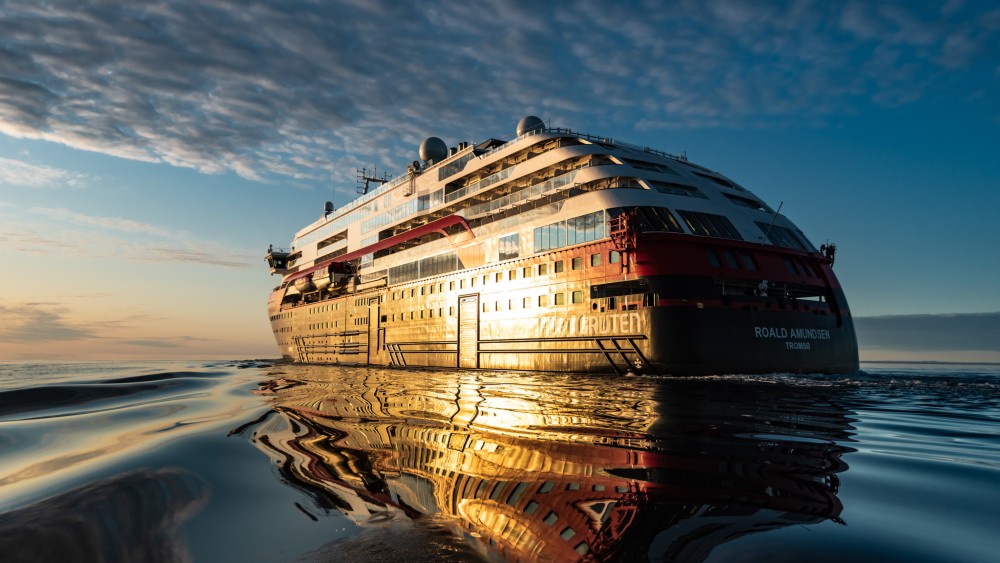 Hurtigruten wants the cruise industry to change, and the Norwegian company is leading the charge with its new hybrid-powered expedition ship, the MS Roald Amundsen—the first in the world to use battery packs combined with low-sulfur diesel to power a cruise ship. The Amundsen is currently sailing down the Chilean coast on its maiden voyage to Antarctica, with 450 guests aboard for a groundbreaking voyage that the company hopes will inspire a design and sustainability shift in the industry.

The striking MS Roald Amundsen has been crafted with touches of classic Scandinavian design throughout its eleven decks and 265 cabins. Birchwood accents, stone tiles and comfortable, minimalist furniture chosen by Sweden’s Tillberg Design are incorporated into the spacious rooms and suites, as are heated bathroom floors and nature-framing windows. “We wanted to do a Scandinavian approach based on our heritage,” says Thomas Westergaard, SVP Hotel Operation and Product Development. “We wanted to break the mold on old fashioned cruise ships by making it lighter and more modern.”

In the atrium, guests are greeted by a massive seven-floor LED screen displaying pictures from Hurtirgruten’s expeditions. The 700 pieces of original artwork scattered throughout the ship were curated by the Queen of Norway, in conjunction with her foundation for young artists. And at the core of the expedition cruise is the science center, a high-tech space where the on-board scientists give lectures and study Antarctic water and plankton samples with the guests. “We’ve never been big on entertainment—we feel it’s better to give people history, biology and geology,” says Westergaard.

The sleek design of the ship isn’t purely aesthetic, though—it’s also part of the sustainability initiative. Apart from the revolutionary hybrid batteries on board, which help save around 20 percent of CO2 emissions, the ship features a wave-piercing exterior by one of the world’s most famous yacht designers, Espen Oeino, that helps the ship move smoother through the water, decreasing drag and using less fuel. The water used to cool the state-of-the-art Rolls Royce-built engine delivers heat back to the ship through the showers, hot tub, sauna and infinity pool.

Sauna with a view on the MS Roald Amundsen  Photo: By Oscar Farrera

Hurtigruten was also the first cruise line to stop using single-use plastic, so guests will find large, refillable amenity bottles in the bathrooms and aluminum water bottles to take on excursions; the hairdryer and laundry bag found in guest rooms, meanwhile, are made using upcycled hotel linens. One of the company’s more creative initiatives resulted in the uniforms in the street food-inspired restaurant Fredheim: the blue shirts worn by the waiters are made of 54 percent recycled ocean plastic, sourced from fishermen who plucked it from the waters around Spain and Portugal. “It’s about using less overall—(and) producing less,” says Magne Jacobsen, VP of Hotel Operations Hurtigruten Expeditions.

A suite aboard the MS Roald Amundsen  Photo: Courtesy of Hurtigruten / Espen Mills

Hurtigruten has plans to update its entire expedition fleet with the same clean, stylish design and sustainability features seen throughout the MS Roald Amundsen by the end of 2021, so guests will eventually be able to choose from ten hybrid-powered ships for adventures throughout the world. Antarctica itineraries aboard the MS Roald Amundsen, which also might include the Chilean fjords, the Falklands, or Patagonia, start at 9065€ per person. In 2020, the ship will also offer sailings in Central America, the Caribbean, Atlantic Canada, and Alaska