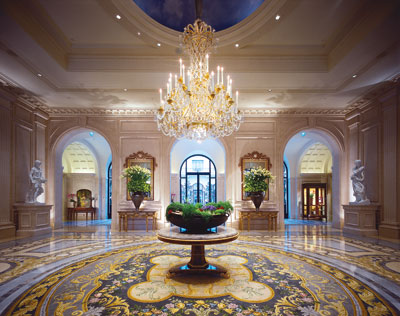 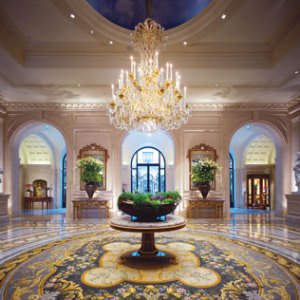 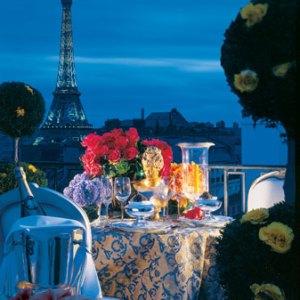 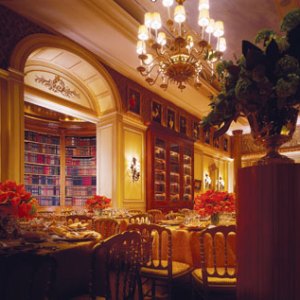 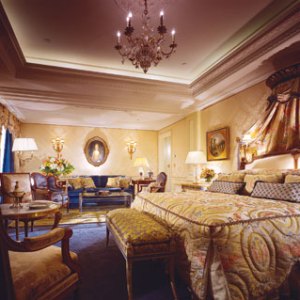 Parisians have a term—les palais, or the palaces—for their city’s finest hotels. Bestowed upon a select few properties in the first and eighth arrondissements, the designation reflects the residents’ inimitable sense of history and pride and, in perfect French fashion, implies equal parts romance and arrogance.

This latter characteristic came to the forefront in mid-1998, when Toronto-based Four Seasons Hotels and Resorts announced that it had secured the management contract and would oversee an extensive renovation of the George V Hotel off the Champs-Elysées. Parisians were appalled that a foreign company—a Canadian company, no less—would helm one of their city’s beloved properties. But by the time the then-71-year-old George V reopened just before Christmas in 1999, even the city’s skeptics had to acknowledge that Paris now had a sixth palace to join the ranks of the Ritz, the Crillon, the Meurice, the Bristol, and the Plaza Athénée. Indeed, through its combination of North American efficiency and European élan, the Four Seasons George V soon established itself as Paris’—if not the world’s—finest hotel, and became a model for the Canadian chain’s properties around the globe.

When it opened in 1928, the vaguely Art Deco–style George V was on the cutting edge of hotel design. The property featured electric pastry ovens, an elaborate wine cellar, and, according to Sotheby’s, the city’s most extensive art collection. Guest rooms included telephones with both in-house and outside lines, private bathrooms (the suites even had two), and a sophisticated dumbwaiter system for in-room dining. Affluent Americans and Europeans flocked to the hotel, and the George V’s gala events included a soiree for the 1928 launch of the transatlantic ocean liner Ile de France. Two years later at the hotel, J.P. Morgan attended the signing of the Young Plan, which outlined World War I reparation agreements, and in August 1944, the George V served as General Eisenhower’s headquarters during the liberation of Paris.

Even before World War II, however, the George V had slipped into disrepair, a state that prevailed for the remainder of the century. “After the ’30s, it was completely destroyed,” says Pierre-Yves Rochon, the outspoken French interior designer who transformed the George V for Four Seasons. “As for technology, everything was in bad condition, the whole infrastructure.” According to Rochon, the hotel’s list of shortcomings before the Four Seasons–led renovation included poor soundproofing, small guest rooms, bathrooms suited to 1950s or ’60s tastes, and Sheraton-style flatware from the 1970s. Most egregious to the designer was the meeting room with “a plastic ceiling” in the space that once held the hotel’s dining room—and is now the location of Le Cinq, the Four Seasons’ three-Michelin-star restaurant.

The George V had ceased being a gathering place for Parisians long before Four Seasons became involved, but the hotel’s interior and amenities were not entirely to blame. By the 1980s, says Rochon, entertaining and dining in hotels was “not fashionable” for residents of Paris. “It was not in the education of the French to spend the evening in the hotel,” he explains. Other than for meals at the Crillon’s Les Ambassadeurs restaurant, Parisians avoided their palaces.

But the French hold tight to their institutions, and when they learned that the new George V was to be a joint venture between a Saudi owner (Prince Al Waleed Bin Talal Abdulaziz) and a North American chain, they expected “gold and gold and gold,” says Rochon, “disgusting taste—a disaster.” The proprietor and managers, however, had no intentions of offending French sensibilities.

As with any collaboration, the George V renovation involved several instances of give-and-take. Rochon’s first instinct was to recapture the hotel’s 1930s style. “But I have two clients, His Royal Highness and the Four Seasons,” he says, and both wanted classic French. Rochon assented in the end: “People like to see the ’30s,” he acknowledges, “but they don’t want to live in the ’30s.”

Rochon prevailed in a dispute over a replication of one of the hotel’s rugs, which some locals considered a historic treasure. Four Seasons wanted to have the copy produced in Asia, but Rochon insisted that it be made in Spain. “ ‘No way,’ they said,” Rochon recalls of Four Seasons, which balked at the extra cost. “So you see the problem when you go to a chain. Thank God they listened to me.”

Another conflict involved whether to include a pool. “It is a dream for a designer to have a swimming pool, but the Four Seasons didn’t want a swimming pool,” says Rochon, who in this instance found an ally in the hotel’s owner. “Everyone was around the table, and his Highness says, ‘I want my swimming pool.’ So the Four Seasons said, ‘OK.’ ” One goal Rochon was unable to realize was to have Ralph Lauren design the hotel uniforms. Lauren declined the offer, a decision Rochon believes the fashion designer will regret “if he comes here one day.”

The result of this collaborative effort between a Canadian chain, Saudi owner, and French designer is impossible not to admire. Rochon is especially proud of the George V’s spa, with its river of stones as a threshold, and the gray-and-gold, garden-view dining room of Le Cinq. As for the guest rooms, the designer does not anticipate more than minor cosmetic alterations in the future. “The soundproof is perfect, the fire regulation is there, the space is there,” he says. “So if you don’t like the yellow, the blue, you can change, you can do what you want. But you don’t need to spend money again to improve the structure.” Perhaps most appealing to Americans, guest rooms at the George V defy the European predilection for hard twin mattresses pushed together to form a king. The beds are true kings wrapped in buttery, rather than starched, sheets.

A hotel, however, is more than its facilities. The Four Seasons recognized early in the development process that French hospitality would have to be rethought for the George V. “Europeans are more reserved than Americans,” says Jean-Pierre Soutric, the hotel’s senior director of marketing. “Our mission is that every single person who walks into the hotel has to be convinced. We never take anything for granted. This is something we learned from the Americans—that service should not extend only to VIPs and movie stars.”

The vacation habits of non-Europeans also influenced Four Seasons’ approach to service at the George V. Noting that Americans and Japanese take fewer weeks off than Europeans do, Soutric maintains that “vacations have to be special.” To this end, the hotel employs 40 people in the concierge office.

The George V’s American-style service extends to nonguests—an aberration for the city’s palace hotels. Hapless tourists who cross the thresholds at the Ritz and Plaza Athénée, for example, are told, in typical French parlance, that it would be “impossible” to linger. Americans prefer to feel that nothing is impossible and have a century-old tradition of utilizing hotels as public spaces (New York’s Waldorf-Astoria, the old Biltmore and the Plaza, the Drake in Chicago). In honoring this aspect of American culture, the Four Seasons George V has become a center of Parisian society. “We really made sure that whoever you are, you can feel comfortable coming into the lobby,” says hotel spokeswoman Caroline Mennetrier. “We opened the door to everyone.”

As the George V has applied lessons learned from its North American peers, so, too, have other Four Seasons turned to the Paris hotel for direction. Soutric notes that Le Cinq is the only restaurant in the hotel chain to earn three Michelin stars, and he believes that the George V’s focus on dining makes it a role model for the rest of the chain. “You see its influence in Istanbul, Milan, and even in New York City,” says Soutric.

Moreover, the George V has become the Four Seasons’ model for renovations, particularly for the New York property and the Four Seasons Biltmore in Santa Barbara, Calif., both of which are undergoing sweeping refurbishments by their owner, Beanie Baby billionaire Ty Warner.

For his Santa Barbara property, which dates to 1927, Warner hired architect Thomas Bollay to guide a renovation that would remain true to the resort’s original style—and provided him with the means to do so. When Bollay, an expert in 1920s-era architecture, designed a new fountain for the front lawn of the hotel, Warner commissioned the limestone-based center bowl to be made in Italy and shipped to the Santa Barbara site. The owner also was accommodating of the concerns of local residents—who cherish the Biltmore much as Parisians prize their palaces—and the renovation, which is due to be completed this summer, promises to enhance this already-impressive resort. Not coincidentally, Warner has hired former Four Seasons George V general manager Karen Earp to head his Biltmore staff.

Set in an I.M. Pei–designed skyscraper, the Four Seasons New York is barely more than a decade old. But Warner, who purchased the property in 1999, has added new presidential suites and soon will unveil a 3,000-square-foot, Peter Marino–designed penthouse. Attesting to the George V’s influence on the hotel, the Four Seasons New York will open a restaurant by French chef Joël Robuchon in the spring. The main dining room now resides in the East Lobby, across from the West Lobby lounge—a space that has been reconceived with a monumental fireplace that can hold 6-foot logs. Both lobby wings are the work of none other than designer Rochon.

Reflecting on his projects in Paris, Manhattan, and other Four Seasons locales, Rochon acknowledges his good fortune. “This was my first hotel for Four Seasons,” he says of the George V, “and it was a dream for me.”

Dream—it is a word Rochon uses often. Working with the 2,000-piece art collection at the Washington, D.C., Four Seasons “is a dream.” Helping to transform a 15th-century Medici palazzo into the Four Seasons Florence “is a dream.” And transforming a shabby but beloved Parisian landmark into the world’s most heralded hotel is, for Rochon as well as Four Seasons, a dream realized.