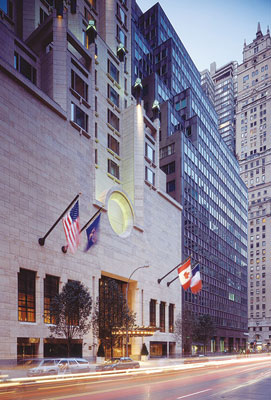 Bill Fischer, founder and president of Fischer Travel Enterprises in New York, advises some of the world’s most discerning travelers. His approximately 500 clients pay a $10,000 annual retainer (and a one-time membership fee, currently $50,000) for his guidance in selecting destinations and securing services and reservations. “For these clients,” says Fischer, “you can’t make a mistake. You have to be right on the money.” Thus he does not hesitate to request that a resort knock out a wall to transform a two-bedroom suite into a three-bedroom unit for one of his clients, all of whom come to him through referrals. “Once people find us,” says Fischer, whose phone number is unlisted, “they never leave us.”

Robb Report spoke with Fischer about the state of upscale accommodations and the place occupied by Four Seasons amid the highest tiers of travel.

How do you select properties for your clients?

BILL FISCHER: I don’t think anybody knows the hotel product better than we do. I travel 200 days a year. We see all the properties that we sell. If we don’t like the product, we don’t use it. I just came back from a month in Europe, and of all the places that I visited, maybe we could sell a handful. Many places fall short because of food, service, attitude, or the language problem. You can count on your fingers how many Caribbean hotels we use. Many islands we don’t sell at all because there are no luxury properties.

What must a hotel offer in the current market?

BF: Today a hotel needs all the bells and whistles. You need wireless Internet hookups, flat-screen TVs—all the latest technology available or that’s going to be available. A lot of hotels still don’t have TVs! It’s a personal preference that the hotel owner is taking out on the guests. I know one owner who doesn’t have TVs in the rooms but has several in his own house on the property.

What about catering to families?

BF: A resort has to have a spa, golf, tennis, junior buffets, and complete programs for the kids. Hotels under-build their accommodations. You need three-, four-, and five-bedroom suites to accommodate families with their kids and a couple of nannies, even the grandparents.

How many Four Seasons properties have you visited?

BF: Almost all. When a property is being built, I usually take a hard-hat tour, and when it opens, I’m usually the first one to check in. I go around with the management to look at what must be done before our clients arrive. There’s no hotel that can open tomorrow and be off and running. It takes three to nine months to get in the groove. Sometimes—but this is not the Four Seasons—hotels rush the openings when there’s still a lot of work going on.

You work with all of the leading hotel groups. How does the Four Seasons chain compare to others in its class?

BF: Four Seasons does a fantastic job. I’m not saying that every one of their hotels would be top-of-the-line. Sometimes it’s a hit and a miss, but I would say that the majority are terrific hotels. They understand our clients.

Does Four Seasons have a weakness?

BF: They have to deal with a lot of owners. Four Seasons can make recommendations—renovate, change the rooms, change the lobby, change the bar—but the people who own the property make the final decision if they want to spend another 15-, 20-, or 30-million dollars.

What is Four Seasons’ greatest strength?

BF: The best thing about Four Seasons is their people and the service that they provide. They put the right people in the right places to use their talents. The staff bends over backward to accommodate us. Even if the hotel is older and there are better ones in the area, it’s the Four Seasons’ service that brings the guests back all the time.

What specific experiences have you had with Four Seasons’ service?

BF: We had a client in Mexico [Punta Mita] whose baggage was lost. He’d come from Atlanta, with a stop in Mexico City. Four Seasons sent people into the baggage areas in both airports. When the bag was located, the head concierge went to the airport at eight in the morning and stayed until the bag arrived at midnight. He carried it personally to the guy’s room.

Another example: My clients in the presidential suite in Great Exuma called for room service. When they came back to the living room, the butler was crawling on his behind with the tray in his hand so he wouldn’t wake the infant sleeping on the couch. My clients wanted to take him home with them. These are the things people remember.

What are the essentials of service at an urban hotel?

BF: You have to have a great concierge who can get the restaurants that most people can’t—or theater tickets, sold-out events, fashion shows. Four Seasons is terrific at that. In New York they have about 12 people who work the concierge desk. Even with an average rate of over 1,000 dollars per night last fall, the occupancy was unbelievable because people want to feel they’re getting the service to go with the product.

What do you consider some of the most notable Four Seasons properties?

BF: Certainly the George V in Paris—[property owner] Prince Al Waleed wanted it to be like a crown jewel. Also the new hotel in Hong Kong. On the resort side, I’d say Nevis and Punta Mita are terrific. Hualalai is unbelievable. It has a small beach, but the service makes it one of the most popular hotels in Hawaii.

Why would you send a client to a Four Seasons over another resort?

BF: Four Seasons knows what they are: They’re a five-star hotel. They’re not building hotels that are four or four and a half stars. At one time, Four Seasons and Ritz-Carlton were running head to head, but Four Seasons flew by them because of the service.

Do you ever go on vacation?

BF: My mind is always working. However great a property is, there are always little things that need attention. I’m not afraid to tell the chairman or the president.