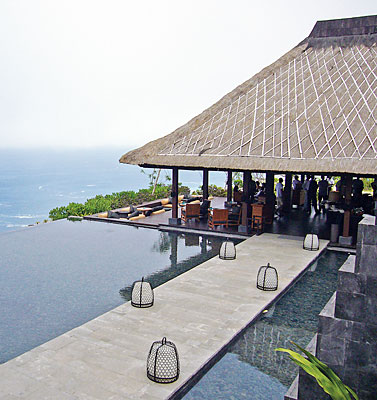 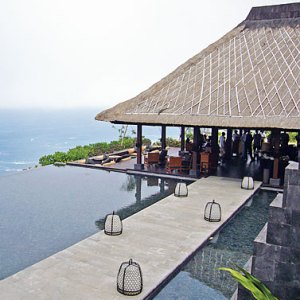 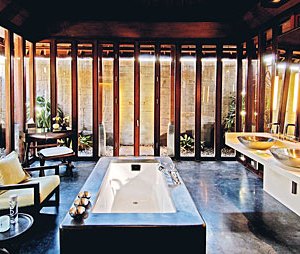 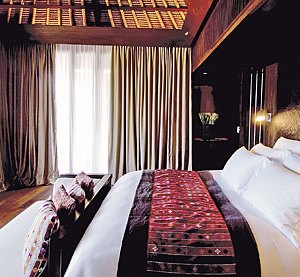 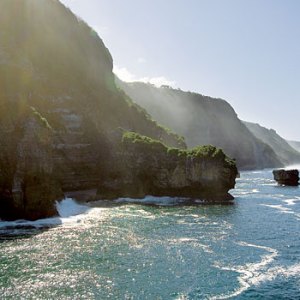 On a bluff overlooking Bali’s rugged Bukit peninsula, a chorus of men in black-and-white-check sarongs sit in a circle and chant in unison as a tangerine sun sinks into the Indian Ocean. Their rhythmic and jarring “chak-a-chak-a” utterings provide the musical accompaniment to a performance of the popular Kechak dance. The dance is based on Ramayana, an epic Sanskrit poem that tells the story of King Rama, his wife, Sita, and his brother Laksamana, who become lost in the forest and fall prey to the power-hungry ogre king Rahwana. The dancers enact the tale, which concludes, after darkness falls, with a fiery finale in which an army of monkey-people, led by a heroic white monkey, rescues the king and his family.

Culturally steeped in art, music, and dance, the Balinese have a natural flair for drama, much like the Italians. The Kechak could be viewed as an exotic ancestor of the 16th-century inter-mezzi, the Renaissance-era musical dramas that evolved into opera. The stage for this evening’s Kechak performance is Bulgari’s latest production: its newly opened resort near the village of Pecatu and the sacred Uluwatu temple on the southern coast of Bali’s frying-pan-shaped Bukit Peninsula.

The Roman jewelry and watch house entered the hospitality business in 2001 through a joint venture with Marriott International’s Luxury Group, which includes The Ritz-Carlton Hotel Co. The first and until now, the only—Bulgari Hotel opened in 2004 in downtown Milan. Instead of taking its next step in Italy, Bulgari made a giant leap by constructing a massive resort on a cliff in Indonesia.

The Bulgari Resort in Bali is perched like a stone fortress on a windswept precipice more than 500 feet above the sea. The steep, rocky terrain and arid climate invite comparisons with Italy’s Capri and Amalfi coast. Nicola Bulgari, the outspoken 65-year-old vice chairman of the brand, says he had no interest in building a property that would resemble any of Bali’s other beach resorts. To access the nearly mile-long pristine beach at the foot of the cliff, guests ride a glass funicular, which offers views of the jagged coastline and the huge waves that peel off and crash onto the coral reef below.

“Conscious of all the other resorts in this area, our mission was clear,” explains Nicola, who notes that the project required almost two years of research and two years of construction. “We wanted to create something strictly indigenous. It was a long journey because we had to find the right native materials, including lava stone, coral stone, local woods. The mixture of design is interesting—like an Egyptian tomb and a medieval Japanese fortress.”

Not all of the resort’s elements are indigenous. Among its many open-air structures are pavilions built to host traditional Japanese weddings. Their inclusion serves a business purpose more so than an aesthetic one. Bulgari recognizes that Bali is a popular vacation and honeymoon destination for Asian travelers, and as Francesco Trapani, Bulgari’s reserved and businesslike CEO (and Nicola’s nephew), points out, Asia represents more than 40 percent of Bulgari’s business. Bulgari hotels, he says, “nourish the brand image and act as a PR machine to raise its profile. If you are successful in what you do in hotels, it has a positive impact on the other categories.”

Naturally, the Bali property includes a Bulgari store, but a second shop displays an array of authentic Balinese art and crafts, including artifacts worthy of a museum. A similar blending of the two cultures was the objective of Milanese architecture and design firm Antonio Citterio and Partners, which also designed Bulgari’s Milan hotel. Citterio’s team researched Bali’s architecture and art and then infused them with Bulgari’s characteristic sleek and chic Italian style. The amalgam’s clean modern lines temper the ethnic Balinese flourishes. “We had to design something that represented Bulgari, while also providing the Balinese atmosphere that a client expects when coming here,” explains Trapani.With the exception of the nearly 14,000-square-foot Bulgari Villa, which is set apart, the resort’s 59 villas stand side by side in rows on the sheer terraces of the cliff. Ella Dinoi, Citterio’s beautiful and bright young project team leader, says that the density of the layout is intended to enhance the energy of the resort. “It’s supposed to be a dynamic environment with people interacting and having fun,” she explains. When guests desire privacy and seclusion, they can retreat behind the stone walls of their villas. Instead of blending in with their natural surroundings, the structures form a thatch-roof skyline that is broken up by stark stone retaining walls and steep pathways.

The central gathering spot of the resort is called the village, where the pool, bar, and two restaurants (one Indonesian and one Italian) converge in a complex divided by reflecting pools. Nicola Bulgari prefers the lively village over the grand and secluded Bulgari Villa. During his inaugural visit last September, he began each day with a peaceful swim in the resort’s infinity-edge swimming pool, which is lined with naturally turquoise green subakumi stone. The stone also is used for each villa’s plunge pool and outdoor shower. Indigenous stone was the main ingredient in the resort’s construction—almost 150,000 square feet of Paras lava stone clad the property walls. Local woods also were essential to the design: The villa interiors are replete with bangkiray wood, a tawny type of mahogany, and an almost black-hued solid mahogany.

In designing the resort, Citterio’s team carefully studied Balinese customs. “It is very important to show respect,” says Dinoi, who spent a year researching native practices. “We worked with the locals and observed their traditions.” Balinese houses—which have discrete living, sleeping, and cooking pavilions, as well as a temple for prayer and offerings—influenced the layouts of the villas, which separate the glass-walled bedroom space from the outdoor living area. Guests sleep with their feet toward the sea and their heads toward Bali’s sacred Mount Agung.

Bulgari commissioned local artisans to produce custom fixtures, including the unusual bronze outdoor lights resembling penjars, the tall, curved bamboo poles topped with colorful flags, which the Balinese use to mark celebrations. While dining in the Sangkar (which means “cage” in Indonesian) restaurant, Dinoi smiles as she recalls the craftsman who e-mailed her a picture of himself inside one of the restaurant’s metal light fixtures, which resemble the various styles of Balinese rooster cages. He worried that he was building them too large and wanted to give her a sense of scale. Local craftspeople also produced the villas’ hand-woven silk bedcoverings, which are modeled on the elaborate Balinese songkets worn for theatrical performances and ceremonial rituals.

While Citterio’s firm designed the interiors and furnishings, Trapani points out that all the artworks and antiques throughout the resort are originals, not reproductions. At the resort’s cliff-side spa, which Espa manages, visitors are welcomed in an antique wooden joglo house from the neighboring island of Java. Bulgari purchased the building, with its intricate exterior carvings, then had it dismantled and rebuilt on the site.

The architectural team also received a lesson in the more primitive local construction methods. At one stage, the construction crew, which numbered more than 1,000 people, brought in raw logs and cut them on site. “They do not have the same construction technology that we have in the West,” says Dinoi. “Everything—from the cutting to the placement of the stones and wood—is done by hand. You see all the imperfections, which tell you that everything is handmade, and that really enriches the place.”

But for the resort to convey a true sense of Bali, it needed to acknowledge the spirituality of its people, who make religious offerings and pray several times each day. One of the property’s more unusual structures is an active Hindu temple that was built from the site’s white Bukit stone and sits on the highest point of land near the welcome pavilion. The temple, administered by local priests, serves the resort’s more than 250 staff members, most of whom are Balinese. (The Balinese practice a form of Hinduism, though Indonesia is predominantly Muslim.)

The Bulgari project was well under way when the second of two terrorist bombings struck Bali in October 2005. Those attacks precipitated a steep decline in tourism. The economy was devastated, but it has been recovering steadily as Bali’s allure pulls visitors back to the island. The magic of the place draws you in and mesmerizes you, much like the chanting of the Kechak performers that Bulgari hired to entertain its guests. Being Italian, Bulgari innately values the power of romance and drama. Without it, its Bali property would be just another beach resort.