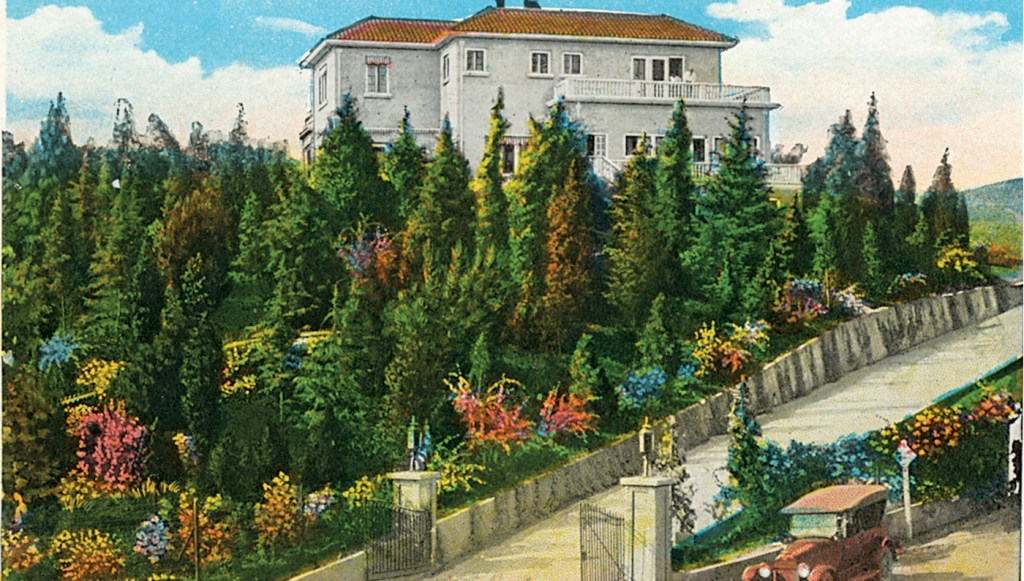 The elder Alexandre Dumas once remarked that to create a drama, he “needed only four walls, four boards, two actors, and one passion.” While this arithmetic may have changed over the course of time, the mise-en-scène nevertheless remains as much a part of any performance as the players—a fact which Hollywood emphasized in its golden age, when eager moviegoers viewed the latest Lillian Gish melodrama or Harold Lloyd comedy in theaters that were themselves palaces.

Yet if Grauman’s Chinese in Los Angeles, the Capitol in Chicago, and New York’s Paramount provided temporary escape for audiences, then another type of movie palace furnished refuge for the stars who entertained them. Actors seem to have an affinity for architecture, as this month’s cover story (see “Double Visionary,” page 76) reminds us; this particular passion for walls harks back to Hollywood’s beginning, when silent-screen mavericks spent their profits liberally on private stages of their own.

For Rudolph Valentino, this ideal setting was an 8-acre estate perched atop a crest in a then-undeveloped section of Beverly Hills. The star of the 1922 hit Blood and Sand, in which he portrayed a master bullfighter, chose to construct an appropriately Spanish-style villa for himself and his wife, Natacha Rambova. An aspiring costume and set designer, Rambova was born Winifred Shaughnessy in Salt Lake City, Utah, but changed her name after studying ballet under a Russian dancer and choreographer. Her ambitious plans for the residence, dubbed Falcon Lair, consumed much of her husband’s free time—and his income, which exceeded $500,000 per year. The couple traveled to Europe, purchasing quantities of antiques, including a gold-trimmed Gothic throne that Rambova, with her flair for sensation, planned to convert into a toilet.

Not far from Falcon Lair, another concession to marital harmony was erected simultaneously for comedian Buster Keaton and his wife, Natalie Talmadge, sister of the actors Norma and Constance. Nettled by her celebrated siblings’ success, Talmadge demanded an address worthy of her husband’s stardom—and her own desire to entertain on an epic scale. The result was a rambling, 10,000-square-foot Italian Renaissance palazzo with a banquet hall, a projection room, the requisite swimming pool, an aviary, and an artificial brook stocked with trout. “[Keaton’s] whole life then was a movie,” one acquaintance later recalled. “His house was a set.”

This observation applied quite accurately to the home of that era’s greatest name, Charlie Chaplin. Although he enjoyed a heftier income than Valentino, Chaplin, who grew up in the slums of London, let his notorious parsimony get the better of him when he broke ground on his hilltop retreat in Beverly Hills (pictured). To save money, he hired studio carpenters—whose creations typically emphasized appearance over endurance—to construct the Mediterranean-style abode, which Chaplin himself characterized as “California Gothic.” Consequently, the cavernous mansion began to crumble gradually almost from the moment of its completion, prompting Chaplin’s friends to nickname the property “Breakaway House.”

Chaplin’s career—and, for that matter, those of Valentino and Keaton—fared little better than his dwelling in the decades following the Silent Era. The Little Tramp’s penchant for amorous liaisons with much younger women landed him in a highly publicized paternity lawsuit during the 1940s, and his left-leaning politics later made him a target for the press as McCarthyism took hold, forcing him into exile. Valentino, for his part, never shared the villa he built for Rambova: Their marriage collapsed before they finished construction on Falcon Lair, and the screen idol perished suddenly of peritonitis shortly after moving in. Keaton’s house, which he proclaimed “large enough to satisfy anyone,” failed to satisfy Talmadge. In 1932, she divorced her husband, who fell into obscurity with the advent of sound. Yet the Keaton palazzo did grant its former owner a dramatic, if ironic, reprieve: In the 1950s, a cache of preserved positive prints was discovered in one of the house’s walls, leading to a popular revival of the actor’s all-but-forgotten work.