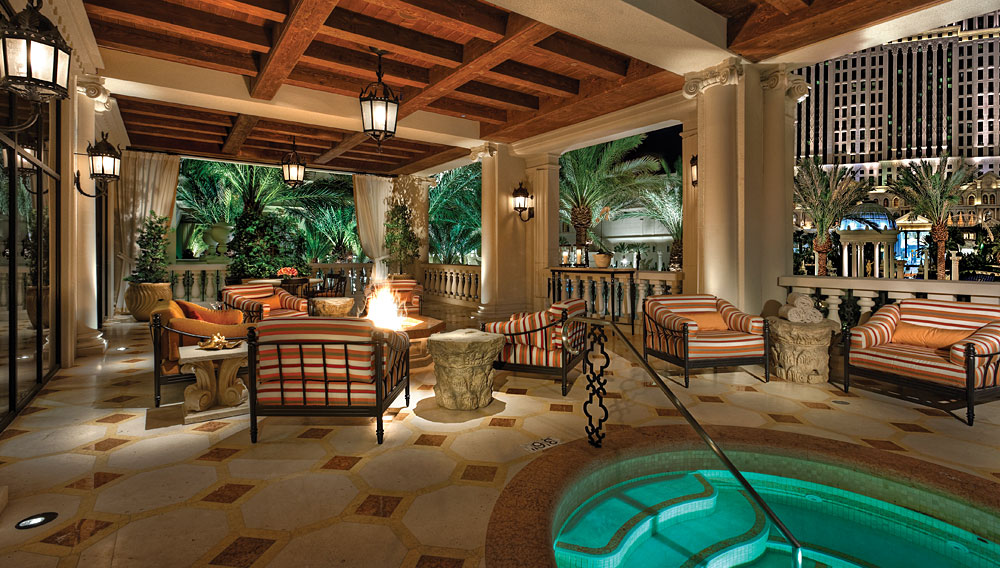 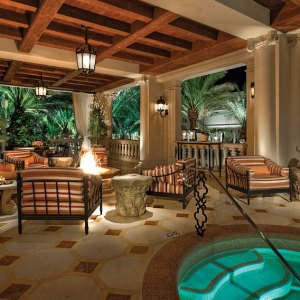 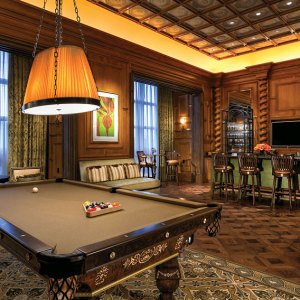 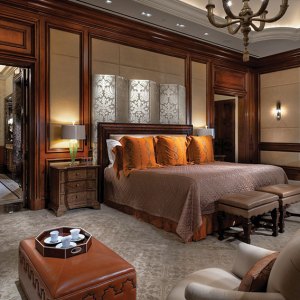 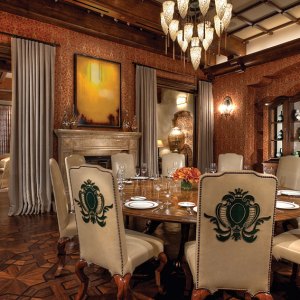 Caesars Palace has raised the stakes. The Las Vegas resort’s three Octavius Tower Villas—the property’s only individually designed suites—opened in September as part of an ongoing $1 billion expansion. Central to the development, the $375 million Octavius skyscraper was built to house 665 guest rooms and 71 suites, including this trio of second-floor retreats where rates are $30,000 per night. Michael Medeiros, the lead designer of the Octavius Tower Villas, intended the 10,000-plus-square-foot suites to be atypical Vegas escapes. “We wanted to keep them very residential,” says Medeiros, a designer in Wilson Associates’ Los Angeles office, “so we used an eclectic mix of furnishings and artifacts that give the impression of a collection acquired over time by a connoisseur.”

Spanish Accents | Infusing the three Octavius Tower Villas with homeyness, Medeiros says, meant simplifying the classical Greek architecture so prominent at Caesars Palace and combining that more streamlined aesthetic with the crispness one would expect to find in a contemporary home. Audiovisual and lighting systems by Crestron and Lutron, respectively, and floors of imported marble also contribute to the residential feel of the suites, each of which goes by its own proper name.

For the three-bedroom Marcus Aurelius Villa, Medeiros and his team used a rich, earthy palette and elaborate woodwork to recall Spain’s old-world charm. Original artwork, leather-paneled walls, and contemporary furnishings (most of which were custom designed) nicely offset the suite’s more traditional design elements, giving the villa a slightly modern feel. The terrace, bar, and master bedroom offer spaces for recreation and relaxation.

Marcus Aurelius’ Spanish influence is perhaps most evident in the groin-vaulted ceiling in the grand entry and in fine details, such as the hand-embroidered insignia that graces the backs of the appliquéd leather chairs in the dining room.

It’s All Greek | The four-bedroom Constantine Villa, with its handpainted Doric columns and marble accents, draws upon Greco-Roman architecture. It also features an open floor plan that, according to Medeiros, enhances the elegant ambience. “It is grand yet sleek,” he says. “It has a very Grecian feel without knocking you over the head with it.”

This subdued style is apparent in the master bedroom, where custom Greek wainscot and upholstery with bronze nailhead trim cover the walls. A gold-plated European Classics chandelier hangs above a custom oversize “emperor” bed dressed in Anichini linens. The centerpiece of the master bathroom, which continues the Grecian theme with its handpainted columns and travertine walls, is an oval-shaped soaking tub rimmed with Esmeralda onyx.

Among Constantine’s other spaces are the high-ceilinged dining and great rooms, as well as an exercise room and a stadium-style media room with a 120-inch screen. (Each Octavius villa includes a media room, a billiard room, a bar, a steam bath and sauna, and a terrace with a hot tub, fire pit, and dining area.)

Constantine’s private elevator (another feature found in each Octavius villa) conveys guests to and from the suite’s elevator lobby, where a handpainted, Pompeian-style mural and a sculptural water fountain are on display. The elevator provides access to the Octavius Tower’s private entrance on Flamingo Road, the Octavius Tower’s VIP check-in lounge, and the five-acre Garden of the Gods pool area, which is scheduled to open in March.

French Connection | A pair of modernized Louis XIV–style armchairs, a cream color palette, and other nods to French classical style give the four-bedroom Claudius Villa a softer feel than the other two Octavius villas, says Medeiros. The design sensibility pervades the suite, from the living room, which features a grand piano and an imported stone fireplace, to the master suite, where a custom bed sits beneath a grand chandelier and a hand-carved Crema Marfil tub rests on a marble mosaic tile floor.

In the dining room, a handpainted, metal-leaf chinoiserie mural catches the light cast by a Nier­mann Weeks crystal chandelier. The custom walnut dining table seats 10, making in-suite dining an appealing option. Guests staying in the Claudius and other Octavius villas can call on any of Caesars Palace’s restaurants for private dining service. They also receive the services of a butler and private concierge.

Because the hotel hosts guests from around the world, Medeiros and his team designed the three uniquely adorned Octavius Tower Villas with multicultural visitors in mind. “We wanted to make sure that anyone from anywhere would feel comfortable here. The biggest challenge was to exceed the great expectations we had already set at Caesars Palace,” says Medeiros, referring to his firm’s renovation in 2008 of Caesars’ Forum Tower Penthouse. “The goal is always to be better than the last,” he says, “and I think we achieved that.”