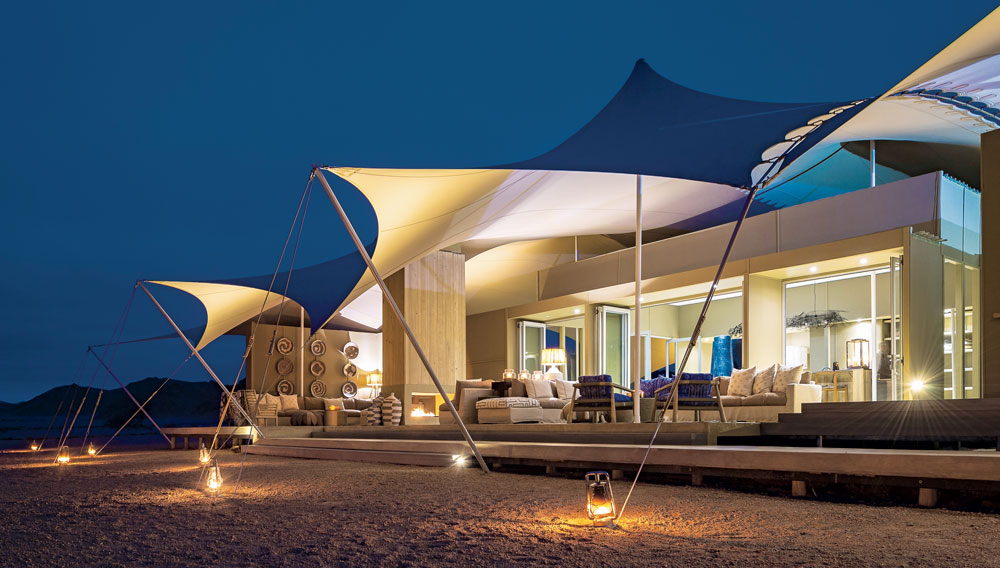 A new camp near Namibia’s Skeleton Coast lays the framework for a one-of-a-kind safari experience.

Dr. Philip “Flip” Stander bounds ahead of his guests, eager to share a discovery he made on the grounds of Namibia’s Hoanib Skeleton Coast Camp. The Cambridge-educated zoologist—who has been studying the Namib Desert’s elusive lion population for more than 15 years—has a knack for uncovering the area’s hidden treasures. The current source of his excitement, however, is neither a cat nor any other living creature, but rather the vestiges of a nomadic people who roamed this barren stretch of northwestern Namibia thousands of years ago.

“If you look around on the ground you can find shards of pottery,” Stander says as he surveys a jumble of rocks, his intense blue eyes peering out from behind a bushy beard the color of the desert’s famed dunes. “Here’s one now.”

Delicately, he reaches for a smooth piece of red clay, maybe 2 inches at its widest, and turns it over to reveal a black painted side. Several more items—including a larger fragment complete with a handle—present themselves within seconds, suddenly revealing this speck in a sea of sand and rock as a trove of ancient artifacts. “It’s everywhere,” Stander says, placing the original shard back on the ground in the precise position he found it. “But you have to look closely.”

In Namibia, a country of striking extremes and fascinating subtleties, the doctor’s advice is sound. Situated north of South Africa and west of Botswana on the African continent’s southwestern tip, Namibia is an inhospitable land of bone-dry deserts and gray and ghostly Atlantic shores. The country is twice the size of California but, with only about 2.3 million citizens, has roughly 6 percent of its population. The residents represent at least 11 different ethnicities, among them the San people of the Kalahari, the seminomadic Himba in the desolate northwest, and the German-, English-, and Afrikaans-speaking descendants of European colonizers.

Almost half of the land in Namibia is protected as private reserves and parkland, including Namib-Naukluft National Park, where some of the world’s tallest sand dunes stretch for more than 60 scorching miles before crashing into the frigid Atlantic Ocean. Namibian parks are home to Africa’s Big Five animals, rare mammals including the coastal-dwelling brown hyena, more than 600 species of birds, and Cape fur seals, humpback whales, and other marine life. And yet, as many regular visitors are quick to point out, one should never expect in Namibia a Serengeti-style safari marked by an abundance of wildlife.

“It is not a first-time destination,” says Will Jones, founder and managing director of the United Kingdom–based safari company Journeys by Design. “It is for those who have had their wildlife fix elsewhere and are looking for something different, to push out the frontiers a little bit more. Namibia definitely ticks that box.”

Jones, who grew up in six African countries, counts Namibia among his “Under the Skin” destinations, a collection that also includes Zambia, Rwanda, and other less-traveled locations. Namibia in particular offers “a much more specialist, unfettered safari experience,” he says. “It’s about spending more time in fewer places, about drilling down into the micro wildlife world—the insects, the lizards. But it’s also about your big cats, your elephants, and how they adapt to life in the desert. It’s all there, it’s just a little harder to find.”

While Namibia has traditionally catered to the self-drive safari market, Jones has seen the level of accommodation in the country improve dramatically over the past decade. Still, he says, “the main luxury item that Namibia offers is space—that ability to feel like you’re completely off grid, that sense of solitude.”

Nowhere is that feeling more pronounced than in the country’s Skeleton Coast National Park, a 4 million–acre expanse that is said to be one of the least visited parks in all of Africa. Last August, the secluded region became relatively—though by no means easily—accessible with the opening of Namibia’s newest luxury lodge, an exclusive fly-in camp that offers an appropriately singular safari experience.

Hoanib Skeleton Coast Camp is set within the 1.1 million–acre Palmwag Concession, on its northeastern border with the national park. Only reachable by light aircraft, the eight-tent property is one of 11 camps in Namibia operated by the South Africa–based Wilderness Safaris, whose lodges near the dunes of Namib-Naukluft, in the northwestern Himba lands, and in other remote regions helped establish a Namibian luxury safari circuit.

At Hoanib, the eight accommodations flank a main lodge, all constructed with heavy-duty canvas tops stretched tightly over an artful configuration of poles. Stylishly simple interiors feature works commissioned from the wildlife photographer Graham Springer, whose black-and-white prints—an oryx standing on a distant sandy ridge, a lone giraffe loping over a dune—emphasize the surrounding terrain as much as, if not more than, the wildlife.

The landscape is certainly worth highlighting. Rugged granite peaks jut from a parched gravel plain that drops gradually from the camp’s elevated perch toward the Hoanib River, a sandy bed that is devoid of water almost year round. Springs underneath, however, support an ecosystem in which deep-rooted ana and acacia trees sprout from the riverbed’s floor, offering sustenance to the desert-adapted elephants, giraffes, oryx, springbok, and baboons that wander its twisted channels.

The camp’s location is about 25 miles from the coast, a distance covered almost entirely by windswept dunes. Excursions to the coast require a morning drive over the dunes and floodplains, and a 15-minute return flight in the afternoon. The trip is included for guests staying three nights or more at Hoanib, but it is by no means guaranteed. Flights are contingent on the Skeleton Coast’s fickle weather patterns, which frequently produce a viscous and vicious fog that barrels in from the shore, enveloping miles of inland dunes in a matter of minutes.

The phenomenon—a by-product of the hot desert clashing with the Atlantic’s cold Benguela Current—is feared by sea captains and airplane pilots alike. (More than 1,000 shipwrecks line the Skeleton Coast, offering one explanation for its name.) But the fog serves a purpose beyond frustrating would-be travelers. In an area where the average annual rainfall is less than an inch, the soupy conditions provide hydration for reptiles, birds, and other animals, with dew accumulating on the leaves of plants to form miniature pools of water.

The desert’s underground channels also create the occasional water source for wildlife, springing up to form striking blue oases amid the vast dune fields. A drive through the dunes to one such wellspring is a highlight of the camp’s trip to the coast, which also might include visits to a seal colony, a rusted iron shipwreck, and a ranger station packed with whale bones, pickled snake remains, newspaper clippings about long-ago wrecks, and other Skeleton Coast curiosities. The outing—which a change in weather can cut short at a moment’s notice—is unique among safari experiences in Africa, offering a sharp contrast and a fine complement to Hoanib’s equally compelling excursions closer to camp.

After replacing his potsherd, Stander heads back toward camp, leaving his guests and their guide to wander down to the Hoanib River. Their path travels first over a granite rise—which hides the den and paw prints of an African wildcat—then down an elephant-worn trail to the riverbed, where a safari vehicle is waiting. A short drive downriver reveals the pachyderms that presumably carved the path, a party that includes three newborns. Each subsequent bend seems to produce additional elephant sightings; giraffes, too, begin to appear out of the thin desert air. A herd of ostriches—maybe five adults and 13 chicks—sprints at top speed at the sight of the vehicle, scattering over the nearby dunes like a pack of velociraptors.

The riverbed’s high concentration of game is an anomaly in these parts and can be an irresistible draw for the desert’s limited predator population. According to Stander, who is now based at Hoanib but spends weeks at a time in the open wilderness, the Namib is the only place in the world where lions live in such extreme conditions. (It is also the only place where free-ranging lions come down to the coast and, on occasion, hunt seals.) The cats were all but eliminated from the desert in the 1980s, shot or poisoned by poachers and farmers. In the late 1990s, however, “reports started coming in of tracks in the desert,” Stander says. “I surveyed the area and found between 20 and 23 lions.”

That number has risen to more than 150 today, a still infinitesimal figure in the context of the 31,200-square-mile Namib. “A typical lion’s range in East Africa might be between 50 and 100 square kilometers,” Stander says. “A desert lion in Namibia might have a range of 2,600 to 34,500 square kilometers.” The desert’s low lion density means that the chances of seeing one are slim. The odds increase greatly, however, when you have a sharply focused doctor in residence.

The next morning, at the outset of a game drive to the Hoanib River, an urgent call comes in over the radio. The guide on the receiving end of the call—who has not seen a lion since arriving at camp a few weeks earlier—suddenly swings his vehicle around and speeds off in the direction of a nearby valley, where Stander is waiting with his latest discovery.