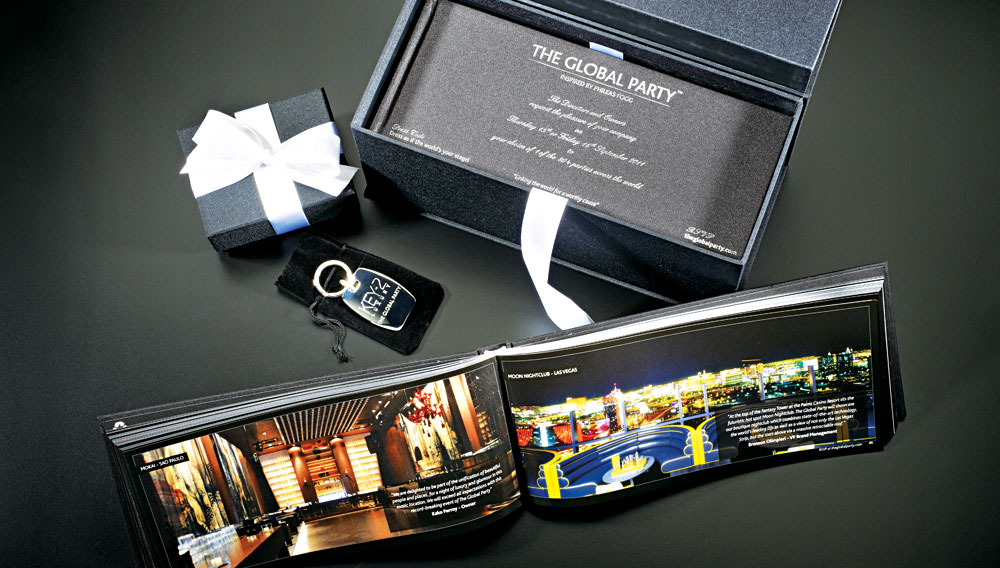 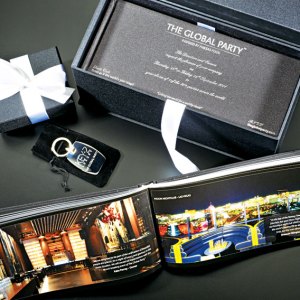 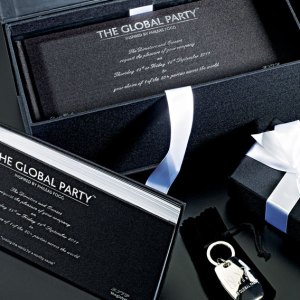 Have you received your invitation from Lord Fink? The one to the world’s biggest party ever?

On September 15, British financier Lord Stanley Fink and his business partner, David Johnstone, are hosting the Global Party: more than 80 exclusive soirees in more than 80 equally exclusive locations around the planet—all on one night. Each venue is inviting 500 couples, comprising regulars and VIPs such as Formula 1 racer Eddie John­son, fashion entrepreneur Tony Singh, actress Uma Thurman, and Swiss financier Arpad Busson. But not to worry if your invitation was lost in the mail: Another 5,000 pairs of tickets are being offered for about $5,000 each, which, if sold out, would add up to more than 80,000 guests—all dancing and swigging Champagne over the course of 24 hours in settings across the globe.

“We hope this will be the party of the decade,” says Johnstone, who hopes that the Global Party will make Guin­ness World Records.

Fink and Johnstone kicked off the festivities in March—there have been months of parties leading up to the Party—at the Marbella Club Hotel in southern Spain. Most impresarios would simply send out a press release. Not Fink and Johnstone. They invited 150 guests—an international mix of journalists, hosts, and sponsors—to spend two days at the 57-year-old Costa del Sol retreat to, well, party.

There were lunch parties, pool parties, cocktail parties, and garden parties; there were endless buffets overflowing with Mediterranean delicacies; there were white-coated waiters perpetually topping off glasses of Rioja and proffering copious platters of Iberico ham and manchego cheese; there was Count Rudi von Schonburg—cousin of the Marbella Club’s founder, Prince Alfonso von Hohenlohe—holding court in a chic blazer and silk ascot. Von Schonburg, who ran the club from the mid-1950s through the ’80s, regaled guests with tales of the glamour years, such as the time the Duke of Windsor found himself overdressed for dinner and threw his tie into the pool.

On the night of the actual Global Party, the Marbella Club is planning a beachfront blowout with cocktails and a fusion dinner, and entertainment that will include an international deejay and a headlining singer or two (there have been whispers about Enrique Iglesias). For other time zones, Johnstone has wrangled locations ranging from private clubs and lounges to luxury trains. Venues will include Boujis in London, M1NT in Shang­hai, Nikki Beach in Marrakech, Sup­perclub in Amsterdam, Core in New York, and the Orient-Express, departing from London.

It will undoubtedly be a long night of unabashed excess—but one that Johnstone and Fink conceived as an exuberant antidote to the economic crisis. Two years ago, when Johnstone was launching the concept and his new company, Globalpr.net, he set his sights a bit lower. “Well, I can do 12 parties. No, 24. No, 50,” he recalls thinking. “Then I thought of Phileas Fogg.” Fogg, of course, is the main character in Around the World in Eighty Days. “I was fed up with all this negative talk about the state of the economy,” Johnstone continues. “The world keeps moving. I thought, let’s plan something two years out that people can hang their coat on.”

Johnstone went to see Fink, a renowned hedge-fund manager and philanthropist with party bona fides of his own, including cohosting the annual ARK (Absolute Return for Kids) charity dinner in London, which has raised as much as £18.4 million in a single night. Fink insisted the Global Party become a massive charity benefit for ARK and for several “little-known” charities—the Duke of Edinburgh’s Award, the Nelson Mandela Children’s Fund, the Raisa Gorbachev Foun­dation, and Sir Richard Branson’s Virgin Unite. The Sunday Times in Lon­don has called the Global Party “a competition to be seen divesting yourself of money,” and Fink and Johnstone expect the night to raise $40 million.

But back to the party at hand. At 5 o’clock, after two days of warm-up cocktailing and schmoozing at Mar­bella, it was time for the main event: the Global Party preview at the Hotel Puente Romano. As house-music singer Josephine Sweett wailed “Fever,” guests downed mojitos and hit yet another Mediterranean buffet. How could they still eat? And how could they still drink? Just after 10 pm, a fashion show rolled out on the courtyard stage, and jugglers tossed flaming batons into the night air (and sometimes at each other). At midnight, the 1970s-style disco was just gearing up. A drum group played along with the deejay, the bongos out-thumping the techno beat. Guests danced on tables, chairs, and banquettes long into the night.

By 7 o’clock the next morning, as some guests were checking out of the Marbella Club to fly home, the last of the party people were just dragging in. Let the global hangover begin.