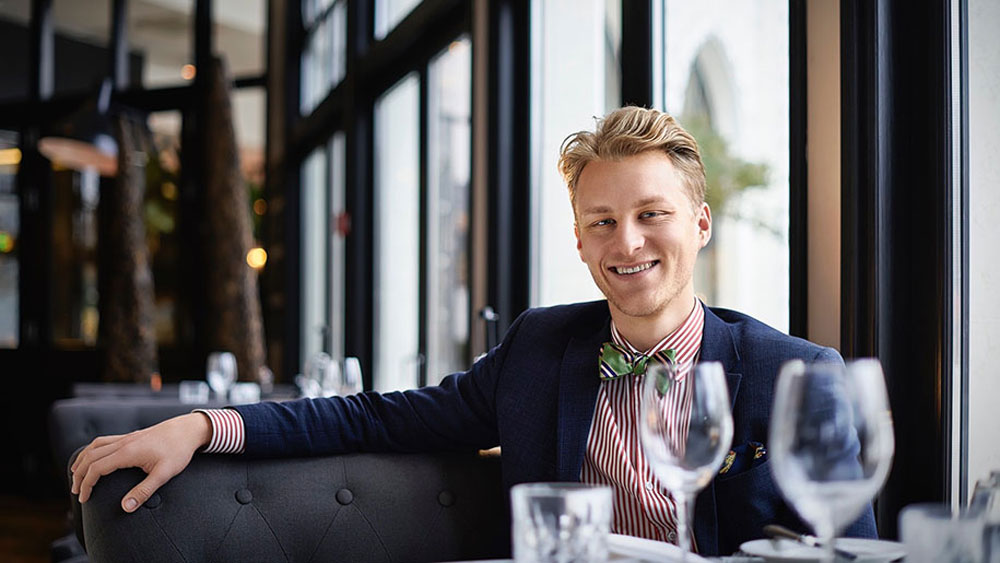 Copenhagen’s eminent food journalist—and the youngest member of the Danish Food Critics—knows his way around Nordic cuisine, and then some. Here, the former MasterChef Denmark star shares his short list for Copenhagen’s best dining, drinking, and more.

We hear a lot about Copenhagen’s food boom—but what about the drinks?

The culinary scene has definitely inspired other areas to rethink what they do, and the cocktail scene is a good example. Before Noma, there was no such thing as a “Nordic cocktail movement,” but today, aquavit—previously seen as a second-rate spirit—has found its way back to the leading cocktail bars, and more and more bartenders have started foraging herbs, roots, and fruit to create new flavor profiles. Today, it is not enough to swap whisky with aquavit in a whiskey sour—they want to start a new language.

What are some good bars to check out?

Ruby has an amazing ambiance and menu, and the bartenders are able to make every guest feel at home. Balderdash and Duck & Cover are also experts at “avant-garde” cocktails.

Any other ways the restaurant world has influenced to local scene?

The Nordic restaurants have done a great job of showcasing Danish furniture and design, which has led to more attention from international guests. Look at K.H. Würtz. The ceramic tableware company from the small town of Horsens was little-known before they started collaborating with Noma, and now more artisan ceramists like them are being re-discovered.

What’s your favorite neighborhood for a culinary exploration?

Nørrebro has a long history with young activists, making it quite colorful. Today, it’s full of well-established families and a multicultural mix of bars, cafés, and restaurants. I recommend dinner at the one-Michelin-star Thai restaurant, Kiin Kiin or the durum kebabs at Dürüm Symfoni, followed by a beer at Brus.

Østerbro is another favorite neighborhood, where I love to take a relaxing walk in the Fælledparken. Savor a cinnamon roll at Juno the Bakery, or a pick up some artisan cheeses, charcuterie, and bread at Letz Shop, which I describe as a candy store for lovers of French cuisine.

And for a delicious souvenir to bring back home?

Head to Torvehallerne, our central food market, and you’ll find everything from native oysters to local cheeses, natural wine, and handmade chocolate.

Where would you go for your last meal?

Søllerød Kro, located north of the city near Dyrehaven Park, might be my favorite restaurant in the world. Set in an old inn from 1677, it has one Michelin star—which I think is two stars too little—for its ambience, hospitality, and spectacular cuisine.