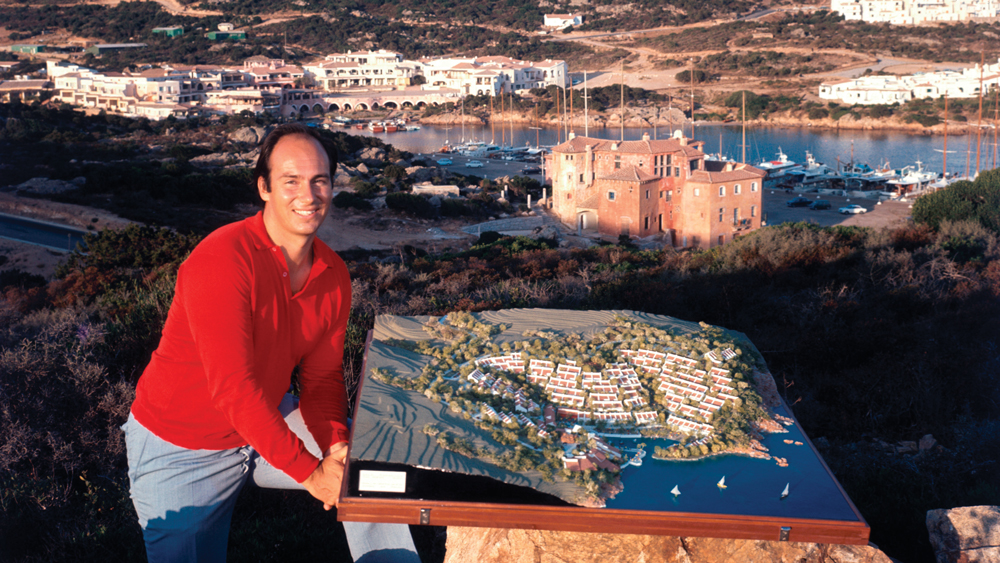 The village of Porto Cervo, on Sardinia’s 35-mile-long Costa Smeralda (Emerald Coast)—home to some of Europe’s most expensive residences and some of the world’s priciest hotels—has been described as a hideaway for the upper crust, an exclusive playground for celebrities, oligarchs, supermodels, and playboys. This was not necessarily the intention of the person credited with creating Porto Cervo and the rest of Costa Smeralda. In 1964, 2 years into the region’s development, Prince Shah Karim Al Hussaini, Aga Khan IV—the business magnate, philanthropist, and spiritual leader of the world’s million Ismaili Muslims—told an interviewer, “We are not foolish. We realize that there simply are not enough millionaires or playboys to make a 35-mile resort area prosper. There will be houses, restaurants, nightclubs, shops, and sporting facilities for wallets of all sizes.”

His Highness succeeded his grandfather as Aga Khan (a combination of Turkish and Persian titles meaning “commanding chief”) 60 years ago, when he was a 20-year-old undergraduate studying Islamic history at Harvard University. In 1958, around the time the Aga Khan graduated from Harvard, the English banker John Duncan Miller visited Sardinia in his role as vice president of the World Bank to check on the progress of a mosquito-eradication program. It was designed to prevent an outbreak of malaria, a constant concern on the island.

While sailing around Sardinia, Miller became so enchanted with the natural beauty of a stretch of the coast that he assembled a group of investors and purchased the land. The Aga Khan was among those investors, but he didn’t see the region until after the acquisition. The story goes that when he did visit, in the winter of 1958, he took a ferry that docked on the other side of Sardinia. Following a 4-hour trek along mule trails, he reached his new property and found no paved roads, electricity, or running water, prompting him to dismiss his investment as folly. The following summer, however, he returned and viewed the region from aboard his yacht and envisioned what would become of Porto Cervo and Costa Smeralda.

“The sea here takes on particularly lovely hues, ranging from the darkest blue to the purest green,” the Aga Khan said in that 1964 interview. “There are scores of fine, sandy beaches with not so much as a cat on them. Rugged green and gray mountains drop abruptly toward the water. A carpet of purple and yellow, and red and blue flowers perfumes the air. The climate is semitropical, much warmer than in the overcrowded resorts of southern France. The thermometer never sinks below 52 degrees Fahrenheit.”

To preserve the beauty of Costa Smeralda and prevent overbuilding, the Aga Khan and his fellow investors established strict architectural and zoning standards. The regulations required that the buildings blend into the mountainous landscape and not clash with the existing dwellings. They expressed a preference for pastel-colored structures and prohibited them from being painted white. “We found the place so beautiful,” the Aga Khan said in a 1965 interview, “and we were so happy, that we decided we had to be very careful, because if not the place would simply become another ugly, over-crowded tourist center.”

Devotees of the Aga Khan bristle when Western media describe his life as lavish and extravagant. In a 1979 interview, he himself countered such a characterization: “I have stayed away from things which did not seem to me to be good sense, where it was affluence for the sake of affluence.” Nevertheless, with a personal wealth that has been estimated at $800 million, he possesses or has possessed the trappings of a lavish life.

Prince Karim with one of his many Thoroughbreds.  Photo: Courtesy Armando Pietrangeli/Rex/Shutterstock

The Aga Khan inherited the Thoroughbred stables and stud farms that his grandfather established. With multiple facilities in Ireland and France, it is one of the world’s largest and most successful horse racing and breeding operations.

In 2014 he took delivery of Alamshar, a 164-foot yacht named after one of his prized Thoroughbreds. When it was commissioned a decade or more earlier, it was going to be the world’s fastest superyacht. It didn’t achieve that status, but it does reach a reported 45 knots.

He owns Bell Island, which lies within the Exuma Cays Land and Sea Park in the Bahamas. The island’s main house is a cream-colored modern structure with a terrace overlooking the water.

In his younger years, the Aga Khan had a fondness for Maseratis. In 1962, Maserati built him a bespoke 5000 GT coupe that was the precursor to the first-generation Quattroporte. It included a 45 rpm record player built into the dashboard. In 1974 he took delivery of a custom Quattroporte with an extra-high roof.

He owns at least two jets and one helicopter, but he has noted that because of the amount of travel he must do for his businesses and philanthropic endeavors, a private jet is a necessity, not a luxury.